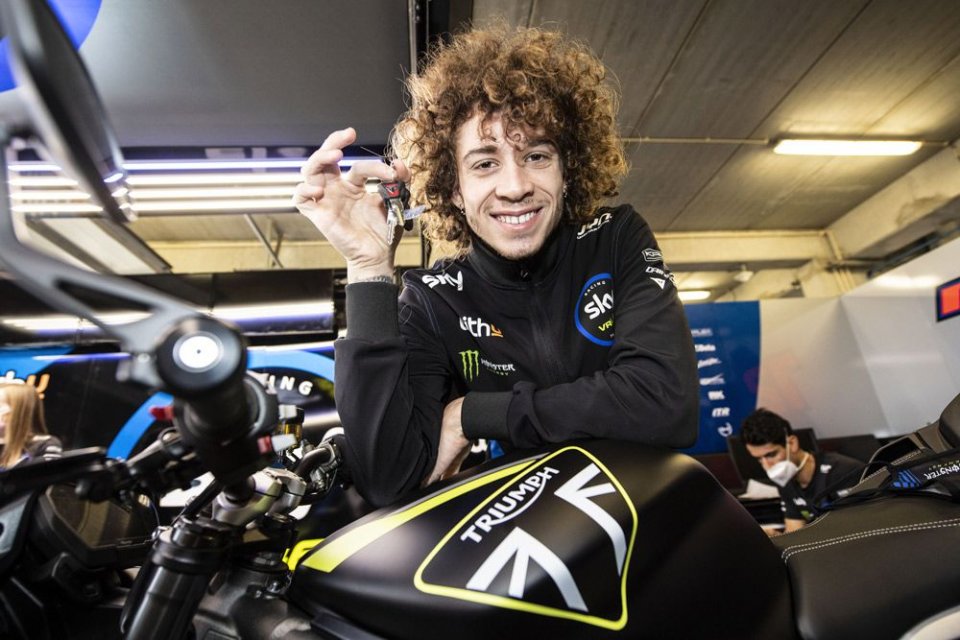 Marco Bezzecchi, Sky VR46 team rider, has won the very first edition of the Triumph Triple Trophy. Last year the British three-cylinder engine replaced the Honda four-cylinder in the middle class of the World Championship. At the start of the current season, Triumph and Dorna set up the trophy to reward the rider who scored the most points in three different areas: top speed record, pole position and the fastest race lap. Bezzecchi, as winner of the Triumph Triple Trophy, was awarded a Triumph Street Triple RS, the bike that gave rise to the 765cc three-cylinder engine from which the Moto2 engine derives.

What do you think of the Triumph Street Triple RS you received as a prize?

"I saw the bike when they brought it to the garage. I was really surprised because they didn't tell me before. I like it very much. It's a beautiful award, much nicer than many trophies I've won in some races. I especially like the colours because I love black bikes, I find them aggressive, they are cool. The yellow and white details are really special. Also, I've never had a road bike, I don't have a license to ride it, when I get home I'll have to get it, it'll be the first thing I'll do ".

We have been hearing rumours about your possible move to MotoGP next year. Can you tell us more?

“Aprilia came to me and they were convinced about my possible move to MotoGP, I felt flattered because I wasn't expecting a request for MotoGP from anyone. We were close, but then I thought about it a lot, also because I already had a contract signed for next year with my current team and we would have had to work a lot to be able to break it up and move to MotoGP. It wasn't going to be a very easy story. Even during the second race in Valencia I thought about it a lot because I didn't really know what to do. In the end, I realized that it would have been better for me to stay another year in Moto2, first of all because I really love riding this bike and I feel good there. Also, I think it's not 100% yet and staying another year with the same team and the same bike can help me a lot. I'll try to have another good season, if you have good results the offers for MotoGP will come. I'm sorry for Aprilia, if they had asked me a little earlier maybe I might have had a different idea. "

"It would be fantastic to join Valentino’s team in MotoGP"

Do you remember when Valentino Rossi asked you to join the Sky VR46 team? Regarding the possibility of his future team in MotoGP, do you think it is your goal to become part of it?

"Last year I was in a difficult and complicated period of my career. When we were in Europe, in the afternoon after the mornings on the track, we would meet in the motorhome to talk, play and spend some time together. I don't remember exactly in which race, however towards the end of the championship, maybe it was Silverstone, all the guys went out and I was alone with Vale. I said I needed help because I no longer felt good when I went out on the track. He told me that it was clear to everyone and that he wanted me on his team. I had a two-year contract with KTM and wasn't sure how to move. We talked about it more and more and I was able to discuss with Hervé (Poncharal, KTM Tech3 team manager, Ed.) about my possible move to Sky. Fortunately, everything went smoothly, so the possibility became a reality. As for Rossi's team in MotoGP, I don't know, also because there is nothing for sure. It would be fantastic to race with his team, he helped me in a very difficult moment, I would try to reach the best possible result for him ”.

Some time ago you said you liked to help out in your father's workshop, do you still do that? Do you think you will make any changes to your new bike?

"Until last year I was working in the workshop with my father, this year because of the races I couldn't. I really like working on cars and it would be great to work on the bike that I won too, maybe to make it even faster, but it is already very fast. At most I will make some changes just to make it even more aesthetically beautiful. I'll also sort something out with the braking. "

The Triumph Street Triple RS has the same engine as the Moto2. How do you feel with that engine and what do you think?

“It's really nice to have the same engine as my racing bike, for sure the one I use on the track has something more. It's a really powerful engine, so it's impressive to think about riding it on the road. It has a quick shift and the blipper is really similar too. The only thing is that you can't go so fast on the street ". 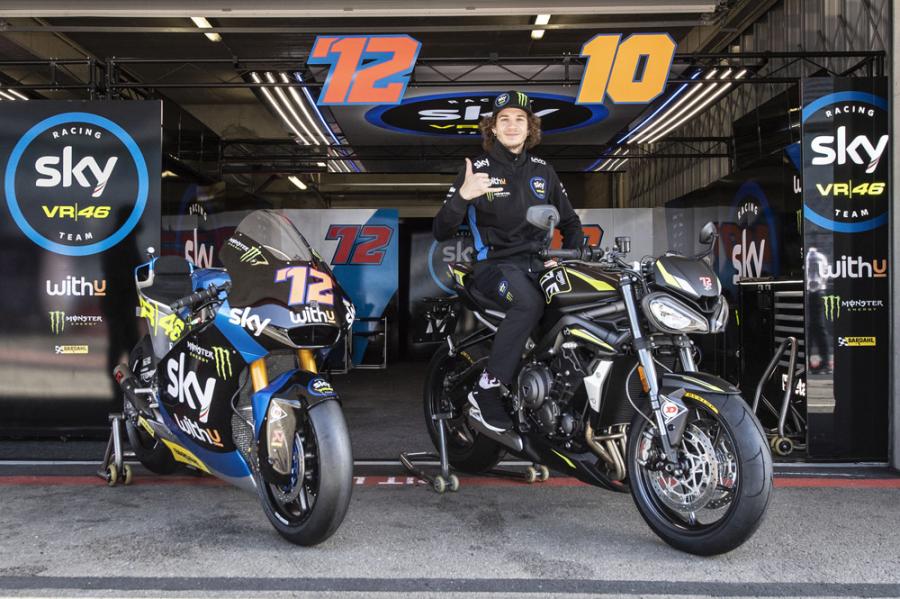 As for your feelings, how did you approach the new engine in the new category in 2019? Did you immediately feel at ease with the bike?

“It was really important for me to move from Moto3 to Moto2 when the Triumph engine was introduced. In my opinion it was the best year to move up in the category, because everything was new. I started pushing the bike right away to better understand the engine and gain experience, it's really different from the Honda engine that was there before. The bike is really similar to the MotoGP bikes and the step to move up in the category will be smaller. This is essential to adapt to a larger bike first. Also, we were able to make many changes on the electronics and this helped me a lot to adapt. We have seen that the level is very high in the electronics and this allows you to adapt the engine to your riding style, especially when braking and accelerating ".

"This year when I started the championship I trained with the VR 46 Academy and we used the Yamaha R1 because we can't use any other type of Moto2 off the track. The Yamaha R1 is the best choice for training, because the engine is very similar to that of a Superbike. This was the best chance outside of the races. The Triumph engine has nothing less than that of the Yamaha. As for Moto2, I could only test the Triumph engine. As I said before, this engine has meant that the step between Moto2 and MotoGP is not as wide as before. The jump between the two categories is certainly challenging because MotoGPs have a lot of power. Moto2 has improved a lot. Here in Portugal we have to check a lot of data from the Honda engine because we have never raced on this track with this engine. Every time we go to a new circuit and compare the data we collect after a few laps, we realize that the difference is great. The bike is much faster. I am sure that the step from Moto3 to Moto2 is enormous. In Moto2 the bike is much more powerful and in fact it is much closer to MotoGP ”.

You said you won't be able to ride the bike you won right away because you don't have a license. What do you think you will do with it?

“The first thing I will do is get my license, as soon as I get home I will start the lessons to get it. I think I'll change it a little bit, I wish it made more noise. I will definitely use it when it gets warmer because now in Italy it is starting to get quite cold. This summer I think I'll put a seat on the rear and go for a few rides with my girlfriend around the city. It's cool because I've never had a road bike. I've always gone around with a Booster. People will recognize me, but with the bike I will be able to escape ”.

"The biggest thing to adapt to with Moto2 was the electronics"

In the first period when Triumph came to Moto2, what was it like working with the development engineers?

"At the beginning it was really difficult to adapt to this engine because it was really powerful and I had to work a lot on the electronics to be able to get confidence with it, it was the biggest job at the beginning. It was the first time I used a blipper system and shifting in this way is really different than a normal one. The engine works best when you shift gears slowly and instead in Moto3 you have to do it fast. The best way to be able to brake with this system is to do it slowly, at first it is really strange to adapt because when you are in the race you try to push yourself to the limit to go as fast as you can. You have to get used to it to make it normal, so in the first few races it was strange ”.

In 2017, in your first season, you were at the bottom of the standings and the following year you were fighting for the top positions. Last year did not go very well and then this year you are fighting again for the top three. Can you explain how this step was from the first to the second year in both categories?

“2017 was my first year in the world championship and I arrived with very little experience. I had little knowledge of the category and the riders I fought with are among the strongest in the world. It was difficult for me to be as fast as the leading riders. The following year I grew a lot, I changed my riding style and I worked on myself to change my way of reacting when things don't go as you imagined. The second year in Moto3 I changed teams and it helped me because I found more confidence with the bike. Thanks to this I was able to have even more confidence in myself which consequently helped me to reach the highest positions in the standings. In Moto2 the first year was very difficult, especially because I changed category. I had a lot of expectations about my performance and this didn't help me at all, I didn't get the results and it was all more difficult, but I never gave up. I worked on myself again to adapt to the bike, the engine, the tyres, everything. This year, as soon as I changed teams, I immediately felt comfortable, both with the bike and with the team. All the work from last year has helped me find myself better in 2020. I had a good season ”.