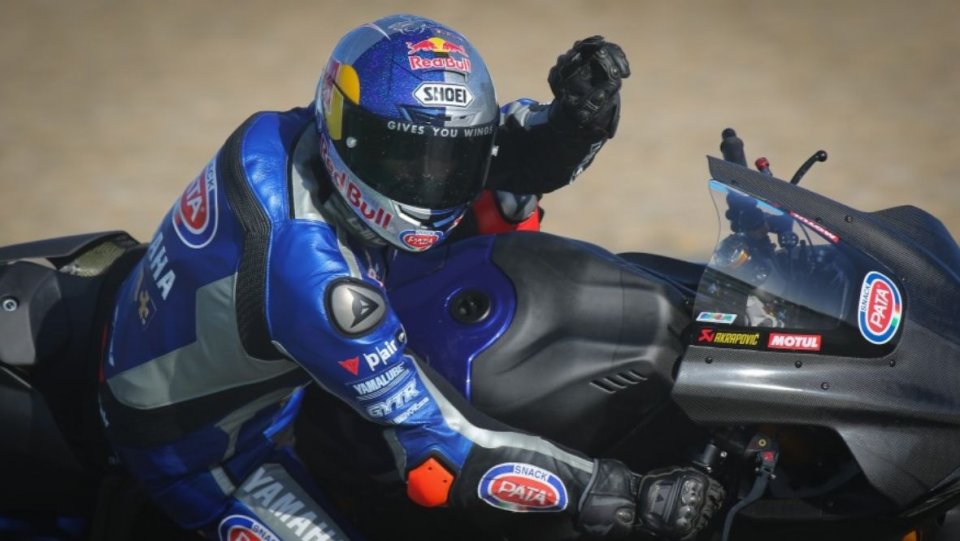 There is one Yamaha in front of everyone else, but it’s that of Gerloff, who on the first day of testing at Jerez managed to outpace the opposition. Among these, Toprak Razgatlioglu also stood out, after setting third quickest time almost half a second behind the American.

Before talking about the tests, however, the Turk reveals some background information: “Yamaha contacted me to replace Rossi at Valencia, but unfortunately I could not take the opportunity for sponsorship reasons. I'm disappointed, because every rider's dream is to ride MotoGP at least once in their life, but I'm happy for Gerloff. He is a young and fast guy, who on that occasion showed that he was competitive ".

After talking about MotoGP, the spotlight then shifted to the tests.

"I must say that today I felt good with the bikes I had available - he commented - I had a lot of components to test and in the end the balance is positive. There are some changes to be made, particularly with regard to electronics and suspension. Today I worked immediately with a view to the race, as the priority for 2021 will be to remain in the top three in every round. So I concentrated on the pace, making the most of the tyre, even if I found a tyre wear that will need to be worked on”.

“One of my goals is to be able to be more effective when cornering. Much of our efforts have in fact focussed on this aspect. Also, we worked on the pace which is not bad ”.

Finally, he had a consideration about Andrea Locatelli, a new entry in the team.

"He is a young and fast guy, who is learning about the bike after the experience in 600. I am happy he is in this team, because of the relationship that we have been established".

Speaking of Locatelli, the Superbike rookie was about one second from the time of Gerloff on the R1.

“It didn't go badly this Tuesday - he began - but I have to change my riding style for the R1, because I tend to ride it like the R6. Unfortunately, it is difficult to give an immediate judgment, also because I need to do more laps. This is a completely new adventure for me and as a result I need time to learn and grow, finding a better balance with the Yamaha. "

Locatelli explained some differences between the R1 and the R6…

"When cornering, you arrive with a different inertia. The weight does not affect that much, more than anything else it is important to stop the bike and start again immediately, without staying leant over for too long. This is one of the aspects to work on to take a step forward ”.

For sure having Toprak at your side will be of great help.

"There is a good relationship with him, we share a lot of data and information. For me he is one of the contenders for the title, also given his experience. Rather than looking at him, for the moment I have to try to continue increasing my confidence with the bike ”.

Locatelli is continuing his learning curve…

“The team offered me a starting base similar to that of all the other riders. I haven't seen any data yet, because I aim more than anything else to do as many laps as possible to improve, without confusing my ideas ”.

"We tried some small new things and I'm confident". Martin: "I have pain in my neck after yesterday's crash, but I'm happy with today's improvements"
3 hours 43 min ago