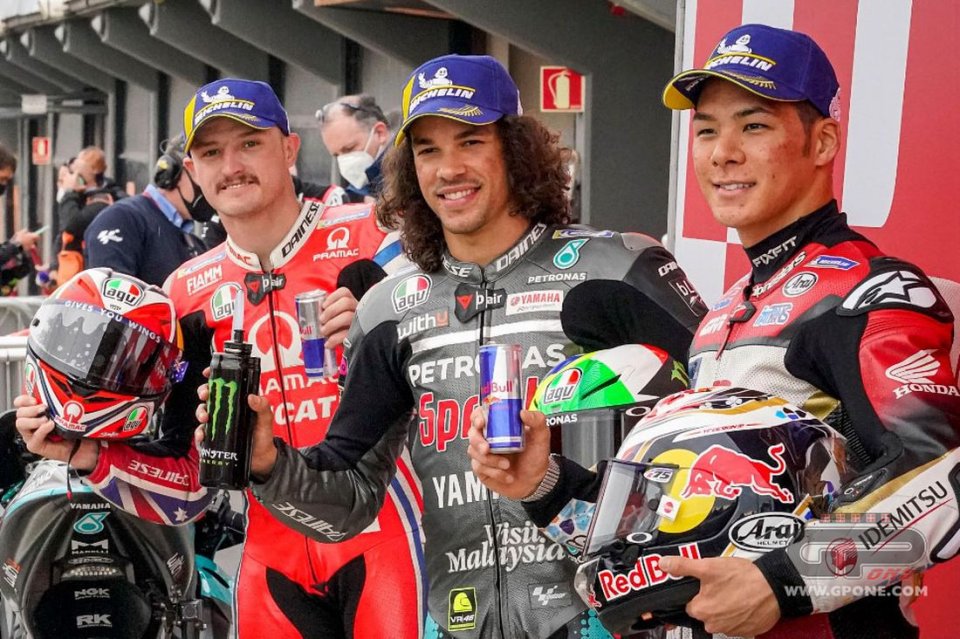 In MotoGP we are close to double figures if we are talking about the number of different winners during the season. Nine riders have taken turns on the top step of the podium in 13 races and the tenth could arrive tomorrow. The two contenders are Jack Miller and Takaaki Nakagami, who will start tomorrow from the front row alongside poleman Franco Morbidelli.

Ducati Pramac’s Australian rider has already tasted that emotion in 2016, when he achieved his (for now only) success in the Assen GP. The Japanese Honda LCR man, on the other hand, is still waiting to find out what it feels like to climb those steps, even though he has already gone close.

Both have nothing to lose in the standings and will be able to race with a clear mind.

"The front row is always important, but even more at Valencia - underlined Miller - On this track it is difficult to overtake, I realized that last Sunday".

Jack gave his all in qualifying with that in mind...

"When I got on the track I was amazed, because the asphalt wasn't as wet as I thought - he explained - I was able to push harder and improve a lot in the second exit. Now, for the race, I also have clearer ideas about the tyres. Last weekend I chose the hard to be safe, not having been able to ride in the dry, but now I'm oriented towards the medium. "

Also for Nakagami the last race was important to start off on the right foot in this Grand Prix, taking advantage of what he learned.

"I started with the bike I had used on Sunday and then we improved it, we’re just talking about details, nothing special - he said - To be honest, today I would not have expected to find such difficult conditions, I was a bit nervous before qualifying, but in the end I managed to do a good lap and I'm happy ”.

For Taka, the first opponent is the pressure, because at Aragon he started from pole but ruined everything with a crash after a few corners.

“That weekend I was very competitive, I was very excited and I couldn't control myself - he admitted - I made a big mistake, but at the same time it was an important lesson for me. Now I feel calmer ”.

Victory is no pipedream, but Nakagami wants to keep his feet firmly on the ground.

"Morbidelli and Miller are fast and the Ducati always overtakes me on the straight - he explained - Tomorrow the conditions will be different than last week, everyone will be more competitive but I know I have an opportunity to get on the podium. Logically I would be happy to win, but above all I will try to use intelligence ".