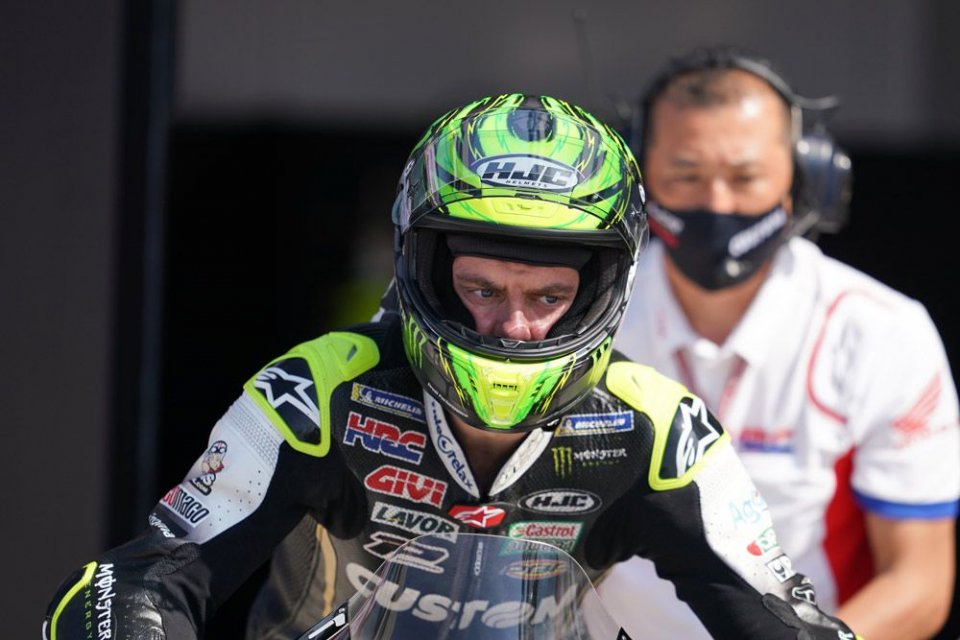 The last pieces of the rider’s market are falling into place, less than two weeks after the end of the world championship.
One of the prized pieces, although not particularly lucky this year, is undoubtedly Cal Crutchlow, left behind by Honda.

The British rider suffered an incredible series of negative events in 2020, almost all related to his  health conditions, but no one can say he isn’t fast, so that’s why,  after having abandoned the project with Jorge Lorenzo, Yamaha decided to take on Crutchlow, with whom they raced from 2011 to 2013, in the Tech 3 team, with a 5th place in the world championship in that last year.

“Now I’m fine. After the last weekend, I hope to be in better shape,” Cal explained and then immediately addressed the hot topic: “In the last week, I’ve spoken with Yamaha, and we’re close to an agreement that we are both satisfied with. I really like the project. It involves my knowledge of the MotoGP and also my speed. Of course, I already informed Aprilia that I have no intention of continuing with their project.”

Between a starting position in the MotoGP and one as a test rider, Cal chose the latter, which is strange, since he has repeatedly expressed his desire to continue racing.

"The reasons? Yes I have some, but it’s not the time to talk about them,” he cut it short, and then added: “I made the decision with my heart and, above all, I took a different path for the future.”

Who knows if this has to do with the continuing health problems he suffered in 2020. Obviously. the physical effort a test rider undergoes is less than that of a regular rider.

“Yes, I’m okay to keep racing, but with this current schedule of three races in a row, it’s very difficult. In another, more normal situation, I would have no problems. I’m still competitive, and I proved it in qualifying.”

There was talk that you would even get a proposal from Honda.

“From HRC? Essentially. yes. I should have looked at what was on the table but, like I said, I am happy with what Yamaha has offered me ”.

Is it sad to leave the role of starting rider?

“Of course, I'm a rider and I think I could continue to do well. If success is proving to be able to win, I would say that not many riders succeed. As for me, I've had ten positive years, during which I have exceeded my expectations. It's sad because I could have continued to be a full-time rider but, on the other hand, I can put my energy into another activity. And, of course, even in this one, I'll be motivated to do the job as well as possible, 100%. Or maybe 98%," he concluded jokingly.

Crutchlow, some time ago, asked the FIM for stricter controls on the doping front, suggesting that there was this type of problem, not only in cycling, his sport of choice, but also in the MotoGP. However, it's difficult to get something out of his mouth about the Iannone case.

“I don't know if the sentence in his case was too harsh. I don't think this is the time and place to talk about it. I don't want to add fuel to the fire. It's bad luck for him. My opinion is that the decision must be respected. Andrea is a rider with an incredibly smooth ride. His control of the gas, of the brakes, is incredible. It's such a pity! Regarding his disqualification, however, I’m not the one who has to comment on it.”

With his departure from the scene, the MotoGP loses the only British rider active in the premier class.

"Yes, I know. I’ve often talked to Carmelo about it, but bringing a British rider is difficult at the moment. For ten years, I was happy to be me.”