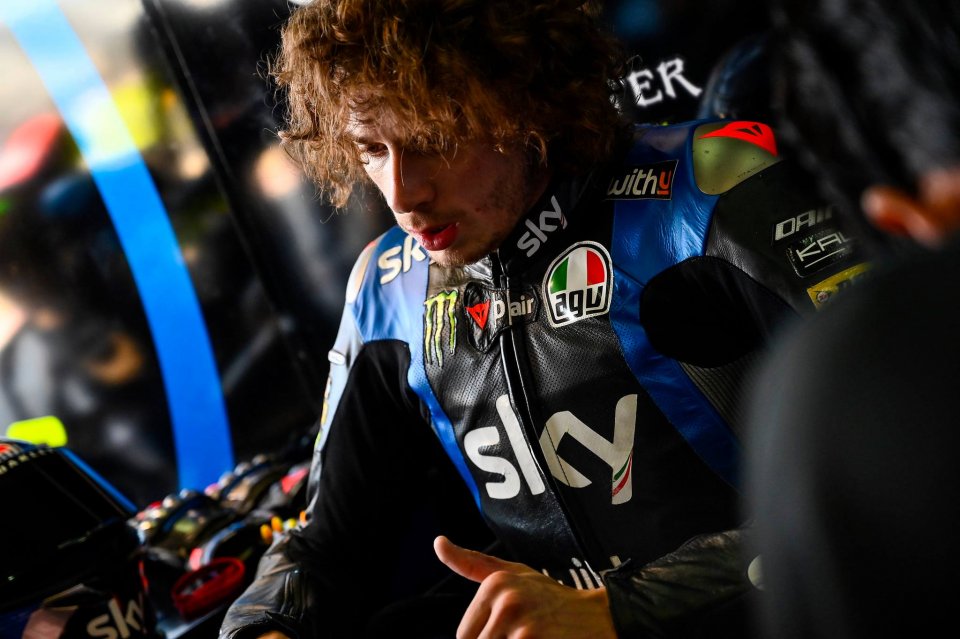 He exudes Romagna and it doesn’t take much to understand that, since he defines himself as Romagna DOC. Who are we talking about? Simple, Marco Bezzecchi, who is forced to spend these days locked up in the Valencia paddock.

It would have been nice for him to go home and spend a few days with his family, but the strict protocols forced the Sky Racing Team VR46 rider to stay at the Ricardo Tormo Circuit with his friends and teammates from the Academy. To kill time there is also space for a telephone interview, which came after his win on Sunday.

"Here in Valencia the days are so long that in the end you also find pleasure in doing interviews - said Marco jokingly - unfortunately we can't move, but at the same time I consider myself lucky, because we spend a lot of time together with all the guys from the Academy. This is good. We play at the PlayStation, we tease each other a bit, have dinner and in the evening there is always a film to watch together ".

In these cases, the Academy is a salvation…

"Exactly. As I said, the days pass slowly when you have to wait from one week to the next and being all together is a boon ".

"Absolutely! There is Migno who is really strong at FIFA and so I have to practice to beat him. But even Maro (Marini) is not bad. I try and do my best”.

“Cele is the one who’s all over me all the time (he jokes). Obviously I say this in a joking sense. The thing is, if I'm playing Call of Duty with Marini, he gets in the way, because he wants to play FIFA or PES. Apart from all that, I’m fond of him a lot and I'm happy to be in the team with him for 2021 ”.

You’ve brought up the subject of the track. On the spot question: do you think you can win the title?

“29 points are a lot, but I’m not giving up. I still believe in it, even if it will be very complicated, seeing as there are so many points to recover. However, until the maths condemn me, I’m going to try and I think it's right. Unfortunately Aragon weighed me down quite a bit ”.

What did you think after Aragon 1?

“About everything, even throwing myself off a bridge (smiles). I'm sorry because that was a heavy blow to take. I felt good with the bike for the whole race, I was able to be fast, but then that crash came. If I think about it, I still get angry now ”.

Let's change the subject then, perhaps talking about something more exciting. What if I said to you the words… Aprilia MotoGP?

“Cool (smiles). I heard these rumours, but I really don't know anything, also because I already have a signed contract with the Sky Racing Team VR46 and as a result I am staying here ”.

But I think MotoGP is your dream, right?

“Of course, as for all riders. It's one of those trains that passes once and has to be taken, but as I said I already have a contract in hand. Aprilia is certainly a manufacturer that doesn’t need much in the way of introduction, given that we all know its history well. I am very sorry for what happened with the Iannone affair, since I imagine it weighed a lot for them ”.

Marco, you share the box with Marini. What sort of riders are you?

“Luca thinks things out a lot, is an analytical person and I would also say reflective. He never gets pissed off. Or rather, when he gets angry he always has the same expression as when he is serene. On the other hand, I am a little more instinctive, sometimes I think I throw my heart beyond the obstacle and this aspect emerged especially in the past, when I had to take risks because I found myself racing with other realities where I was struggling. Let's say that if I get angry, you realize immediately (he jokes) You can ask Uccio ".

Who is your best friend in the Academy?

"I don't have a best friend, because we are a united and compact group and I think that's the beauty of it, that is, the fact that we feel good when we are together".

Soon you will go to live together with your fiancée. Does that scare you?

“No, it scares me more to ride a motorcycle (smiles). I have been engaged to Chiara for years now and we will soon take this step together. We have set up a house and now it is very close to being completed”.

How did you win over Chiara?

“She is a girl who loves rallies. One evening, while it was snowing, I was in San Marino going sideways in the car together with my friends. We met and then everything started from there ”.

You define yourself as a Romagna DOC. Do you know how to make piadina?

But if you weren't a rider, what would you be?

“Probably a mechanic, like my father. Mechanical things have always fascinated me, assembly and disassembly. With Chiari we are in fact preparing a car to do drifting ”.

Graziano Rossi could be an excellent teacher…

“He has a hundred cars, that level is unattainable for me. Anyway, Vale's dad is really great, because he is always going sideways in the car. He doesn't care about being fast, just about going sideways ”.

Final question: when will we see you in MotoGP?

“I hope soon, but without haste, because I have my path to follow. I am convinced that you need talent to go to MotoGP, but at the same time also the head. If you are missing one of the two, it is difficult to get there ”.