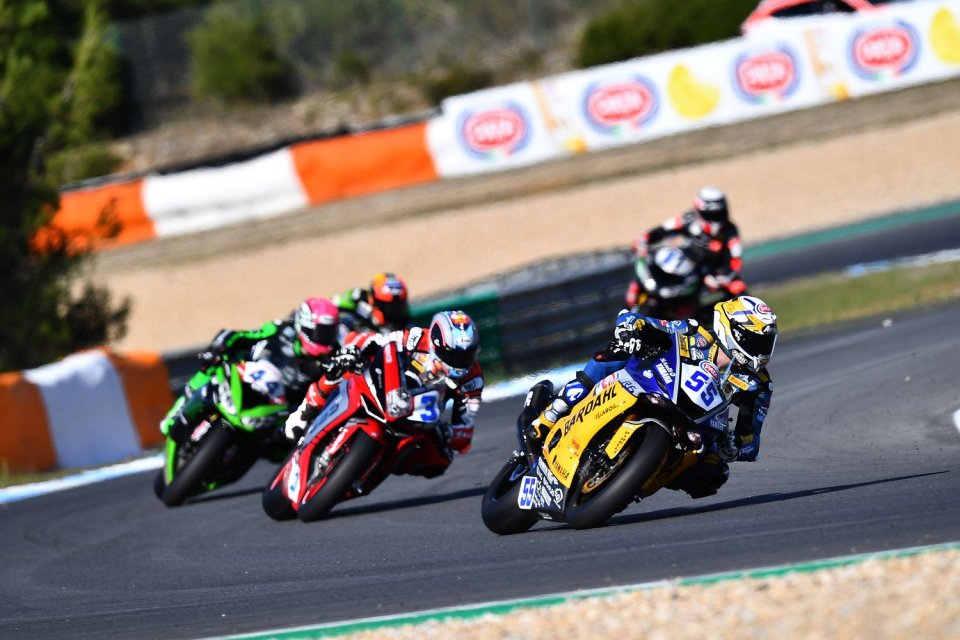 FIM, Dorna’s organizers of international competitions, and MSVR will collaborate in the evolution of the Supersport class. The intermediate class of derivatives has a long tradition – as we can read in a FIM press release – but as the motorcycle market evolves, it’s clear that changes are needed to allow for more motorcycle models to choose from.

The new rules that have been defined could allow bikes from different manufacturers that currently do not fall within the Supersport class to become  part of it, therefore, adding further value both for the teams and for the organizers of the world championship. MSVR, as organizer of the British Supersport Championship, will lead the evolution of the category in 2021 through the introduction of a three-cylinder Triumph 765 while, later in the season, a two-cylinder Ducati 959 will also be introduced to assess whether these new technical changes to the regulations can represent the basis for the 2022 FIM Supersport World Championship organized by DWO.

Stuart Higgs, MSVR BSB’s Championship Director, said: “The Supersport class is very important for all the teams that compete on an international and national level. Previously, many manufacturers and bikes with different configurations have competed together, but we’ve seen a decline in relation to the changes in the market. Resetting and redefining the category will provide a great stimulus and a great future for the intermediate class of derivatives. I’m very excited to be able to collaborate on this project by working closely with our friends from FIM and DWO.”

Gregorio LaVilla, WorldSBK Executive Director, said: “We’re always open to solutions that improve the world of motorsport, and I’m happy to see that our ideas coincide with those of many Organizers at a national level and of the FIM. MSVR’s support will help us develop this great idea, and we’ll work closely with all the parties involved so that this represents a great success, in order to have the same rules in both Championships in the future and perhaps also in other national competitions.”

Franck Vayssié, Director of the FIM Race Commission on the circuit, concluded: “Motor sports represent a big family at an international level. The FIM is more than happy to see that all stakeholders work together to improve competitions from a national to a world level. Since its inception, the Supersport class has always offered a great show on the track, with great challenges for the title. Due to the current market situation, in order to maintain this same level of interest and equity for all teams and riders, it’s imperative that the FIM updates the regulations. The whole FIM family supports this idea and will work closely with the promoters, the organizers, and the manufacturers to carry out this great project.”