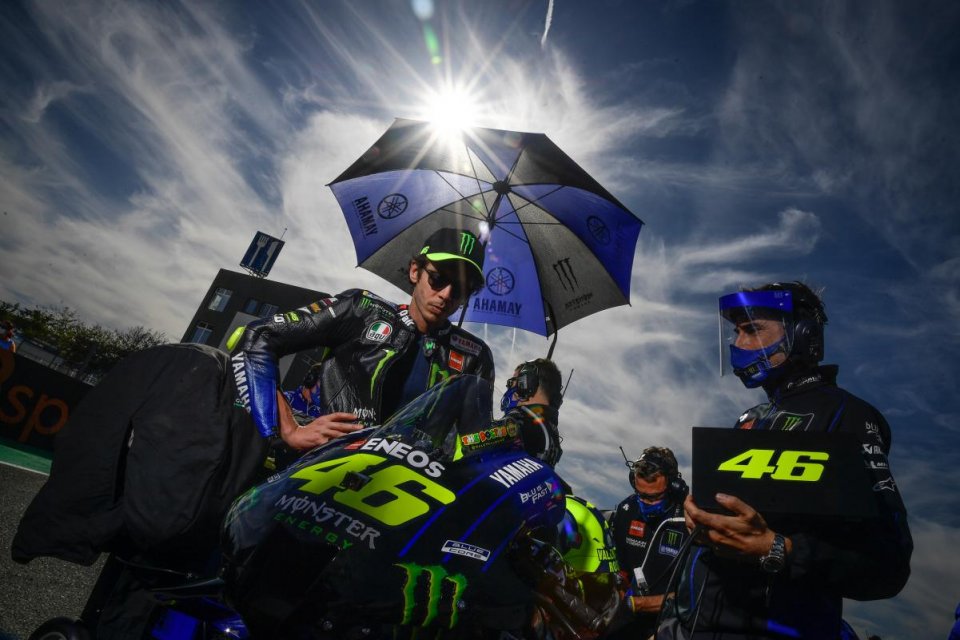 There is no getting around it: we are in the face of a generational change, something that in itself is inevitable. This is how it works in all sports, where one cycle comes to an end and another opens at the same time, bringing with it a mixture of emotions, nostalgia and regrets. Sport is full of those who leave and at the same time a new generation of those who arrive on the battlefield, ambitious to assert themselves and show their potential.

This is what has been happening in MotoGP in recent years. Two seasons ago we said goodbye to Dani Pedrosa, last year it was Jorge Lorenzo, while in two weekends’ time we will be saying goodbye to Cal Crutchlow and Andrea Dovizioso. The former will join Yamaha as a tester, while the latter will take a year off.

Valentino Rossi raises the average age, without him it’s younger by a year

In the midst of all these farewells and arrivals, however, there are those riders who remain. This is the case of Valentino Rossi. Despite him being repositioned in Petronas, also in 2021 we will find the Doctor at the starting blocks at the ripe old age of 42. The age of the rider from Tavullia obviously has an important impact, since he is twice as old as someone like Quartararo, who could almost be considered his son. In this regard, the 2021 MotoGP season without Rossi would see the average age drop from 27.18 to 26.47, gaining almost a year.

With all these changes in mind, we decided to have a look at how much the premier class grid will age next season compared to the last one. To do this, we compared the entry list of last year with that of next year, obviously considering the age of each individual rider. 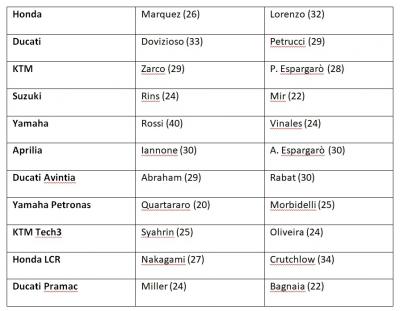 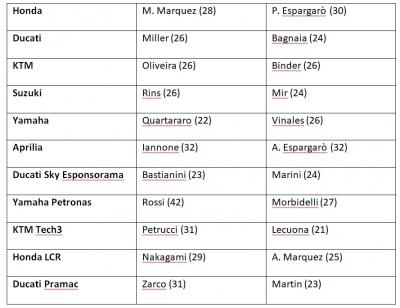 According to our calculations, in 2019 the average age of each rider was 27.59 years, while for 2021 it will be 27.18. A figure that all in all seems to remain fairly in line, despite Jorge Lorenzo, Andrea Dovizioso and Cal Crutchlow being absent. However, there is one aspect that affects this number and that is the age of the rookies. In 2019 Francesco Bagnaia and Joan Mir made their debut in the premier class at the age of only 22, while Fabio Quartararo was 20.

In 2021, however, we will find ourselves with riders like Bastianini and Martin who will come to the grid at the age of 23, as well as Luca Marini with 24. In short, compared to last season, the rookies will have a few more ‘spring chickens’ to deal with.

The factory teams become 'baby' and are rejuvenated by two years

One intriguing aspect is the age comparison for the factory teams. In this case, the analysis provides some particularly interesting data. In 2019 the average age of the factory teams was close to 29, in fact it was 28.91 years. In 2021 it will instead go down to 26.83, thus dropping below the 27 mark.

Above all thanks to the promotion of Bagnaia and Miller, accompanied by Fabio Quartararo, who together with Vinales will make up the youngest factory team in the paddock, while the youngest team outright will be made up of Bastianini and Marini.

MotoAmerica and AMA have given the green light to the RS 660 model to compete in the Twins Cup starting next season in compliance with the...
2 hours 19 min ago

For 2021, Herrera will take part in the WorldSSP Challenge, featuring at the European stages of the championship, which currently make up the first...
6 hours 32 min ago

Friday, February 27th, at 6 pm, live streaming on the team’s social media channels, but also on GPOne, Facebook, and YouTube: presentation of the...
1 day 5 hours ago

Moriwaki won the inaugural Moto2 world championship with Toni Elias: "Toni won riding the MD600, one of the best achievements in Moriwaki's history,...
2 days 5 hours ago

The 2018 Supersport 300 champion was injured last September after a crash in Estoril: "Five months seemed like five years"
3 days 2 hours ago