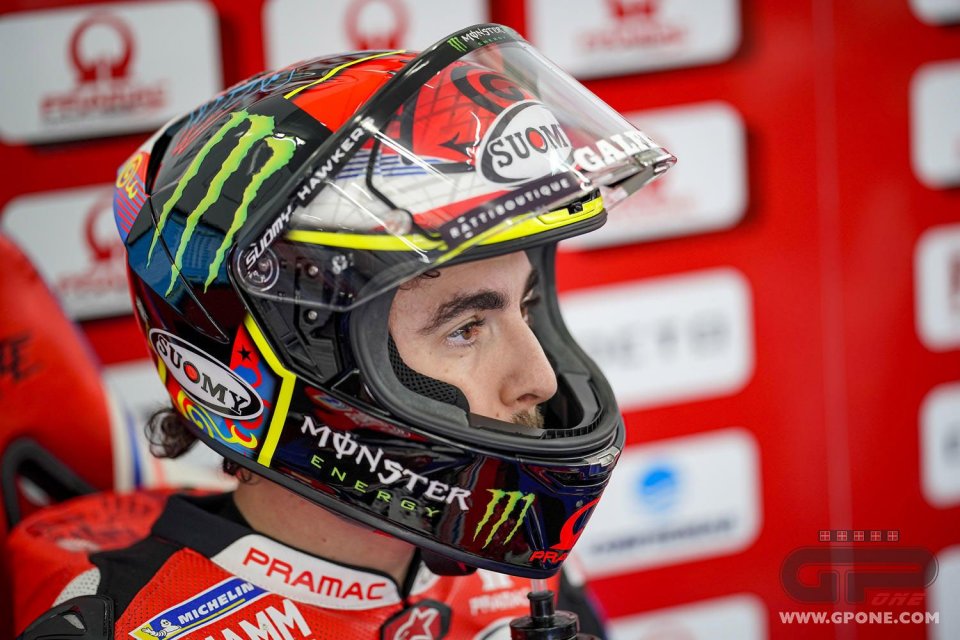 Pecco Bagnaia had said that Valencia could be the track where he shone once again on the Ducati and today that was the case in the race. The problem was that his race only lasted seven laps, those completed by Pecco before having a disastrous crash at turn 2. Starting from far back on the grid, the future Ducati factory rider was however pushing hard, replicating the pace being kept by the two Suzuki riders leading the race. In short, a wasted opportunity, which leaves Bagnaia with a great desire to make amends in the last two races of the season.

But before talking about today's race, Bagnaia commented on Luca Marini's arrival in MotoGP in 2021. Valentino Rossi's brother is the fourth VR46 Riders Academy rider to reach the top class, joining Rossi himself, Morbidelli and Bagnaia, who will share the Ducati colours with Marini.

"It is true that a new generation of riders is coming, but veterans are always strong too - commented Bagnaia - Marquez when he returns in my opinion will be at the same level as before, he has already amply demonstrated that he is a winner and will return to the top. But it’s clear that in all sports young guys emerge who always go a bit faster. The generational change is in everything, it will probably come here too. Moto2 was very preparatory for everyone and I am happy to have Luca Marini in Ducati next year, so we can talk a little bit about the bike between us. If I can help him, I'll give him a hand too. The Ducati is a complicated bike, if I can help him get on the right path to ride it, it will for sure be an advantage for him ".

But now let's talk about the present and an error that compromised a race in which you seemed to have a very high potential.

"It was my mistake, I didn't manage the potential of my bike well - admitted Bagnaia - today I was really strong and fast, but I started too far back on the grid. I had to push a lot, on lap 5 I was the fastest rider on the track with the two Suzukis and I was trying to make up all the gap. When you start from the back it goes like this, you have to push too hard. It was the first time I used those tyres for the race, it was difficult. I braked a little harder in turn 2 and I crashed, my mistake. A beginner’s mistake. At least I found the good feelings of Misano and that's okay. What I have to do now is learn to stay more focused in the first phase of the race. My potential today was to finish in the top six and instead I crashed. I hope to find dry conditions here next weekend to be able to work on it a bit ".

Did you take a gamble on the bike set-up after the warmup?

"Today the bike was different, we tried a set-up we had never experimented with before, a gamble after the warm-up. The bike was perfect, but I need to do more laps in this configuration. I think next weekend we will be as fast as today, but I absolutely need to finish a race. I haven’t finished in three races due to different problems, next time I want to be as fast as today and finish. It will be vitally important to start at least in the first two rows, starting from behind makes everything too complicated. I would like to do at least two top five finishes in the last two races. I think I have the potential to do it, that's my goal. I'll try, we're working hard to get back to the top. I have to realize my potential better. "

At least you got back the speed of Misano again...

"It's a pity that I only did seven laps, but that's the way it is. Today I really made a big mistake, but it was a difficult weekend. Starting with so many unknowns was not easy, I didn't know how I would have been with the front tyre, which also let me down me in the end. But it was the right choice, I just made the wrong way to approach the race. I went too fast right away, I was much faster than the riders in front and I wanted to make up too much time immediately. I came out very strong from turn 1, so I arrived a little stronger in the same braking point of the lap before turn 2. I insisted on the brakes for a moment and turn 2 was the most treacherous all weekend, I should have expected that and not made a beginner's mistake. We all know that you learn from your mistakes, I only have to do this now. I am confident for the sensations found here ".

Do you think these mistakes will affect you next weekend? Maybe you will want to finish the race without taking too many risks?

"Usually I don't let myself be conditioned, but next weekend at turn two I think I'll be a tenth slower. It's better! Above all I want to finish the race, at Aragon 1 I crashed stupidly. At Aragon 2 I broke the engine, here I crashed on lap 7. That's not good, we have a lot more potential, today I could have been the best Ducati rider. I have to learn, grow and accept that in MotoGP you must always be at the limit, but by using your head. Today was too early to push like this on lap 7 ".

The Noale manufacturer, currently testing in Qatar, has mounted sensors on the RS-GP that are mainly used in F1
4 hours 39 sec ago

“Is the Honda difficult? All MotoGPs are. It depends on the rider. Tonight my head will work a lot, and tomorrow it’ll be better.”
10 hours 37 min ago

"We tried some small new things and I'm confident". Martin: "I have pain in my neck after yesterday's crash, but I'm happy with today's improvements"
1 day 19 min ago

“The Formula 1 is a bigger organization. Everything happens faster, but the riders have the same attitude. Alonso returned here because he’s hungry...
3 days 47 min ago