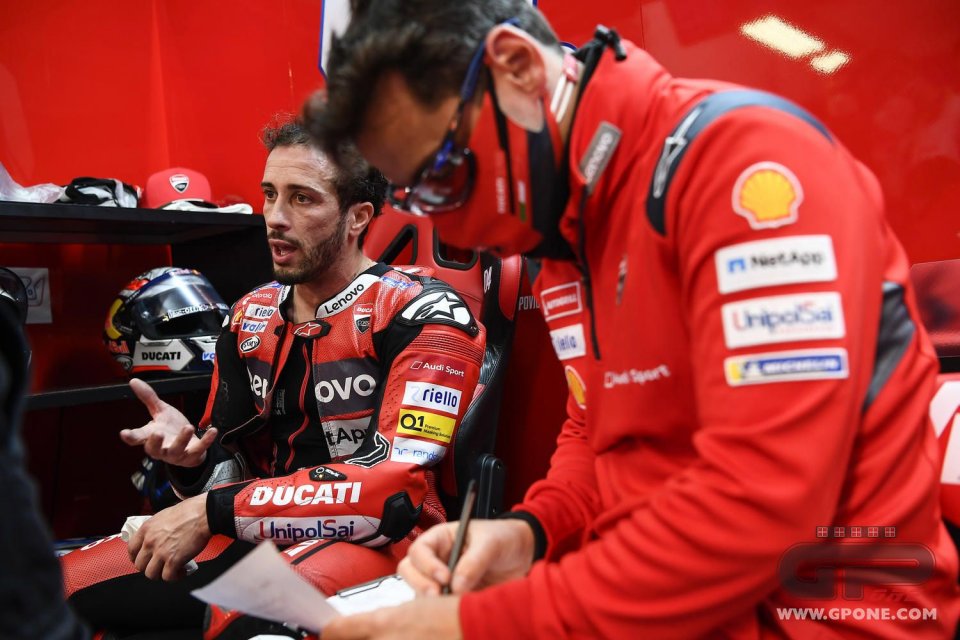 Andrea Dovizioso had one last chance to stay in the race for the title at Valencia, but now that the top of the standings is 45 points away with only two races to go, it is clear that the possibility of winning the title in his final season with Ducati has completely vanished. A real shame for Dovizioso, who from 2017 to 2019 was only beaten by his majesty Marc Marquez, that is the great absentee on the track in this ever so strange 2020 season.

Today Dovizioso finished the race in a dreary eighth position, a Grand Prix in which it was clear that he was undoubtedly suffering. Starting twelfth on the grid, the future ex-Ducati man managed to put together a decent comeback, which however came up against the wall represented by a chronic lack of confidence with the 2020 Michelins. It has been a major setback that made this season difficult for The Man Who – on paper and without any problems - Would Be King, taking the crown away from the absent Marquez.

"With the sensations I had this morning, all in all the race was not bad - commented Dovizioso - especially in the second part I went quite well. Luckily I feel good and I managed to be consistent, which makes me happy. We have to try to take these sensations to next weekend. At one point I tried to ride a little differently and was quicker right away. Then I had a drop in the tyre. My goal will be to learn to be fast with new tyres and go back to braking the way I know. To finish the race like this was not bad after all. Sure there was Binder who overtook me at the end, but he was really too fast. I think next weekend we will be much faster, we will have the chance to work as we have not been able to do this weekend. I hope we can take a step forward in speed and then we will see what we are fighting for. "

This season was supposed to be your big occasion without Marquez on the track. How do you feel now that the chance to become champion is fading away?

"It's not nice to be in this situation after fighting for three years with Marc. They are bad feelings, you feel you have no cards to play in any situation. You feel you have no energy to make use of, you feel a little helpless for the way you are working in the box. I didn't want to end up like this with Ducati, but there are a thousand reasons why we are in this situation. I tried, but things are the way they are. The championship was strange for many reasons. Of course Marc was missing, but it would have been strange anyway even with him on the track. Everyone did their best, regardless of his presence."

Has the Suzuki improved a lot or was it the tyres that changed everything on the track in your opinion?

"The Suzuki is the present. We cannot predict the future with these tyres, but we are seeing Suzuki's potential today, both of the bike and of the riders. They have always been competitive, they will be competitive in the future as well. These tyres change everything for everyone. For some for the better, for others for the worse, that's the truth. I think Suzuki didn't complain about the tyres because for them it was an advantage. You usually complain when things are worse, not when they are better ".

Today you almost had a big mix-up with Alex Marquez. Did you notice?

"Fortunately I didn't notice Marquez. It wasn't nice to be in that situation, we all had some tyre problems at that moment and he came in much faster than me in braking. Fortunately nothing happened."

The outcome of this race brings an end to your chances for the world championship, or do you think you can still fight for it?

"As I said this weekend, today's race doesn't change much. Today it didn't go so badly, but the point is that nothing has changed. We arrived here with little confidence on the bike and this Grand Prix didn't change these feelings. The maths keeps us in the running, but it changes little. Let's say that when you have so few cards you struggle to be euphoric. But in the end from second to sixth in the standings, we are all close. Let's play it out and if it is not possible to fight for the championship, I wouldn't sneeze at taking home a second or third place. I think it’s going to be complicated, but I’ll try until the end ".

You said you weren’t feeling very well. Should we worry?

"I have some particular symptoms, but light in reality. Today half an hour before the race I felt a little worse, in fact I was worried that it could end badly. Tomorrow I will take the test and we will see, even if the symptoms don’t seem to be Covid. I also did the anti-doping test, we'll see if anything comes out in those! I hope I don’t have anything ".