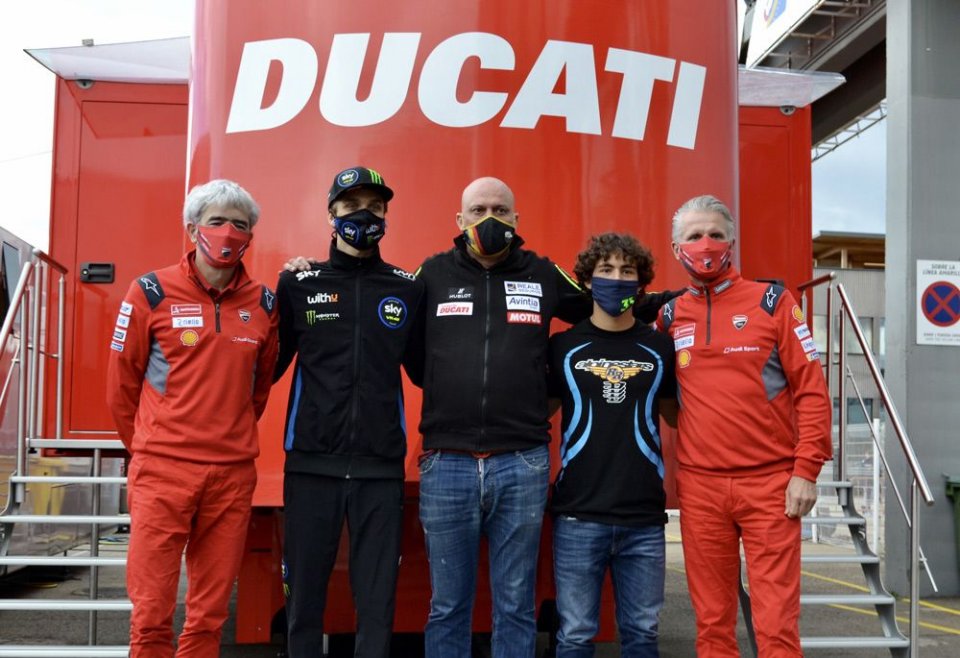 The announcement we had been expecting for some time has finally arrived: in 2021 Luca Marini and Enea Bastianini will race in MotoGP on Ducati bikes with the colours of the Avintia team.

The two rookies will have the Desmosedici GP19 at their disposal.

“Getting to MotoGP is the dream that every rider has had since childhood – declared Luca Marini –  Having this great opportunity and being able to share it with Sky Racing Team VR46, Esponsorama Racing and Ducati is even better. In these years with the team I have accumulated a lot of experience, I have grown, and I have achieved the first important results. We are in a crucial phase of the season; we will continue to work hard to reach the maximum goal before taking this big step together"

Enea Bastianini was also pleased: “I am very happy to get into MotoGP with Ducati and Esponsorama Racing. Now I have to concentrate on finishing the season, since I would like to go up as World Champion although I know it will not be easy. The following season, several riders made the leap to MotoGP, we started a new adventure together with the fastest riders in the world in which I think that together with the team I will be able to achieve good results"

Raul Romero, the team patron, commented: “Esponsorama Racing demonstrates once again the evolution carried out in recent years, going from being the tail of the category to fighting for front positions thanks to the technical and sporting restructuring of the team added to the arrival of Johann Zarco and the evolution of Tito Rabat in recent years. Time has shown that things well done pay off and we only have words of thanks to our partners such as Ducati, Öhlins or Brembo and all our sponsors. Having Luca Marini with us next year and the structure of the SKY VR46 is a source of pride since, to this day, it is one of the strongest structures in the championship in all categories. Next year we will make a leap in quality in which we have high expectations of continuing to show that we are a benchmark team in the MotoGP World Championship "

Alessio Salucci added: “Announcing the move to MotoGP by another of our riders and of the Sky Racing Team VR46 makes us proud. Together with Sky, with whom we started this extraordinary adventure in 2014, in recent years we have given a decisive boost in favour of Italian motorcycling. Today, thanks to the agreement with Esponsorama Racing and Ducati, Luca Marini and the Sky Racing Team VR46 will be able to experience the World Championship in the top class, which from next year will therefore be able to count on the talent of another Italian promise. It is a great opportunity for the whole team, but also a decisive moment for the rider's future and for our entire motorcycle movement. I'm sure we have a spectacular 2021 ahead of us ”.

Paolo Ciabatti, Ducati Corse Sporting Director: “We are very pleased to have reached this agreement with Esponsorama Racing and Sky Racing Team VR46 thanks to which Luca Marini will be able to make his MotoGP debut in 2021. Luca has proven to be one of the fastest and most competitive riders in Moto2 and Ducati will provide him with all the support necessary to accompany him in his first year as a rookie in the top category. With this decision Ducati intends to continue its strategy aimed at enhancing the young talents that has already led Pecco Bagnaia, who also grew up in the Sky Racing Team VR46, to make his debut in MotoGP with Pramac Racing in 2019 and to reach an important milestone for 2021: that of wearing the colours of the official Ducati team ”.

Luigi Dall'Igna, Ducati Corse General Manager: "We are very pleased to have reached this agreement thanks to which two young Italian talents will be able to make their debut in MotoGP next year on our Desmosedici GP bikes entrusted to the Esponsorama Racing team. This year Raul Romero's team has shown that it has reached an excellent level of professionalism. Thanks to the renewed technical support that we will provide to the Andorra team in 2021, we are sure that it will support Enea and Luca in the best possible way in their first rookie season. Both Bastianini and Marini have shown to be highly competitive in Moto2 this year, and we are sure that the time has come for them to move up to MotoGP. We will provide them with all the necessary support to accompany them on their way to the top category. With this decision, Ducati intends to continue with its strategy to enhance the young talents, that has already led Pecco Bagnaia to make his debut in MotoGP with Pramac Racing in 2019 and to reach an important goal for 2021: to wear the colours of the official Ducati team".