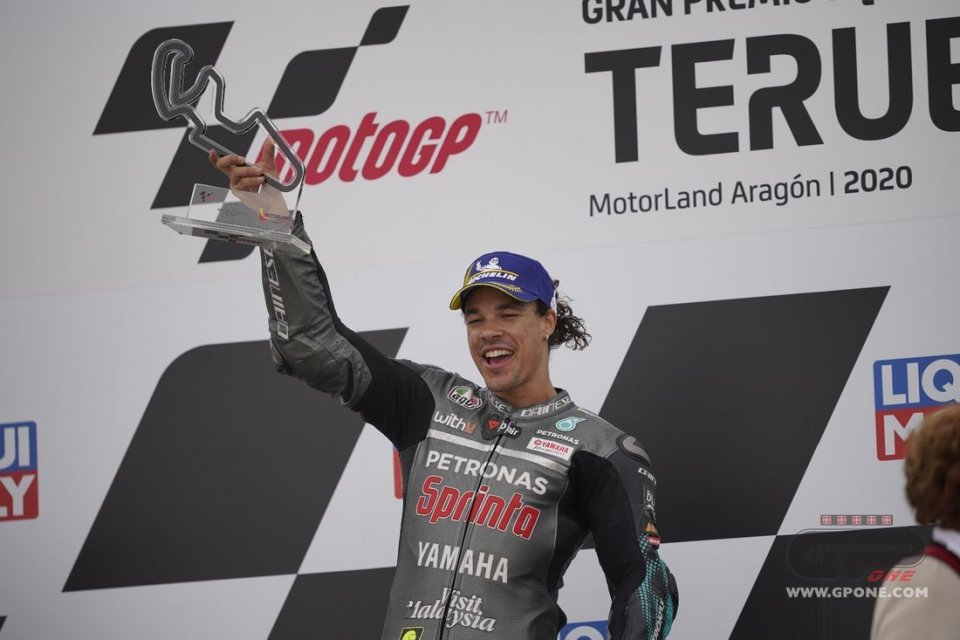 Between transcendence and hyper-rationality, Franco Morbidelli is enjoying the moment. Which is infinite and beautiful, a success as long as a dream.

“What I felt today was a different kind of concentration: Brazilian concentration, I call it. And when it is like that, it is above normal. One of my idols is Senna, you know. I have never believed in a higher level of concentration, different from the normal one you can have during a race. But today I began to believe in it more. The human being can do fantastic things if he is in an optimal mental condition like we were today, like I was today. And this condition of mine is due to the fact that we worked splendidly, my team put me in this condition: to think about riding the bike in the best possible way”.

He calls it a "trip", because there is something mystical in this great roundabout of Aragon, a track that was difficult and instead became an epiphany for Morbidelli…

Morbidelli: "Thinking of winning for a satellite team is irrational, but not impossible"

"Thinking of winning is irrational. There are two reasons: we are a customer team and I have a package from last year. But irrational does not mean impossible. We have to believe 100% in what we are doing and we will see where we will be at the end of this championship. Nothing is impossible in life, nothing. There are improbable, inconceivable things. But they happen. And they happen because whoever makes them believes in them one hundred percent. Especially in sport. We will keep pushing, and then we'll see at the end of the year ".

It is a journey that can become a method. Maybe yes, maybe not: today Franco doesn't care. Look to tomorrow, but enjoy the now. "It will be difficult to replicate everything, but these things will certainly be a reference for the next Grands Prix. I don't know if it will become a method. But they will be a reference." 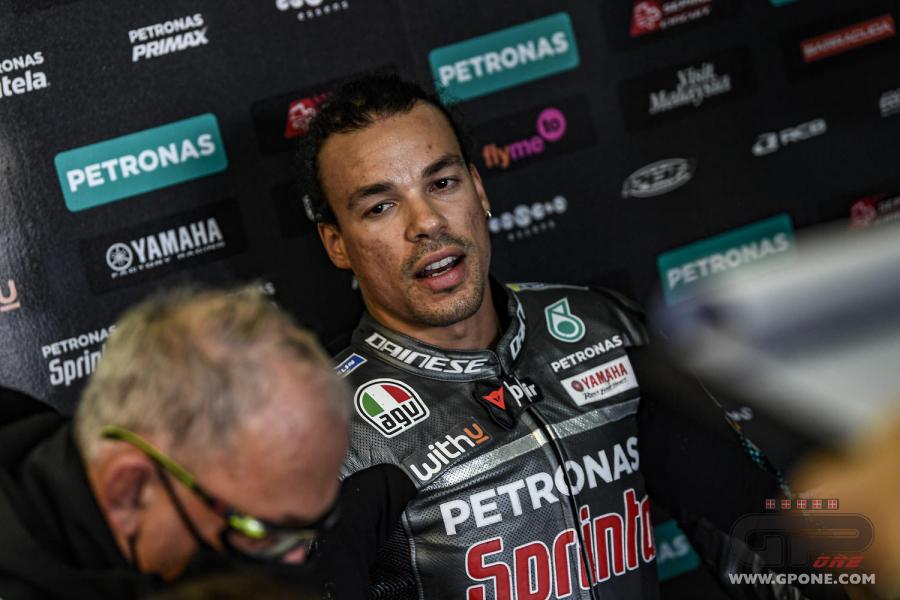 Franco’s greatness is blooming, it is his second success in this world championship of absurdities, surprises, incredible things. And he too is back in the fight for the championship: fifth place, the horizon is beautiful…

“I knew today was all or nothing, I also knew that my team had done a great job this weekend. They set up the bike perfectly and I knew, I was confident one hundred percent in what they had tried. I wanted to give everything in every lap, I had to give everything in every lap. I felt great throughout the entire race. Thanks to everyone and if I won today it is thanks to all of them. By doing this job in such a short time we were able to achieve a great result ”.

Morbidelli: "In the next three races we will have to attack, but without making a mistake"

Franco glitters with joy, even if he is so calm that he seems imperturbable…

“Apparently we're back in the game today. We have 25 points to make up and we are ready to face these three remaining races. We can’t even make one mistake. We have to work very hard and very well, and see where we will be in the end ”.

Franco was eleven seconds faster than last weekend. There were various reasons for this and Morbidelli found them

“Everything went very well this week, this was the key . We did some laps with used tyres, we set up the bike for new tyres and we also tried to prepare the bike for the tyre wear, and that paid off: eleven seconds faster. A different tyre choice which was better for me ”.

Being fourth in the standings "is a great thing" said Morbidelli. Something even more: "It is a great thing in itself. I am here where I dreamed of being as a child, and also last year and even two years ago. It's a great situation for me, but when you're in the game you always want more. "

When the going gets tough, what does Morbido do?

“I will push more and more. When they asked me to make any predictions, I didn't answer, I avoided answering ”.

There are no comparisons with Quartararo.

Morbidelli: "The factory Yamaha is better but I have to focus on what I have"

Now is Yamaha the favourite?

"It's funny, yesterday I was out of contention, today I'm the favourite. We just need to all focus on doing our job best. There are three contenders within Yamaha. All three of us are at the top, competing for the title, I have to concentrate on myself, to do my best, and Yamaha to push for all three ”.

"We all know that it is better to have the factory bike, the current year's bike is the best possible: it allows you to have a greater development from the technicians. But as I have been doing since the beginning of the championship, you have to focus on your own package and squeeze your own package, if not more".

There are already those who are wondering what advice has come from Valentino Rossi. As always, Franco shows a lot of wisdom…

"Morbidelli:" When you grow up with a legend like Rossi you ask yourself: what would he do now? "

"It's hard to find a single piece of advice because when you grow up with a great rider, with a legend, with such an experienced rider, when you live with him and you steal the things he tells you, you take what he says, what he does, how he faces the situations, when you spend so much time together sometimes you cover up, you mask your personality. I have taken so many things over time that I approach things in my life and the sport as he would. I often say: what would Vale do in this situation? Because he always knows what to do at the right time. But it's hard to find a piece of advice or two. Valentino for me is an inspiration, every day. I look at him, I observe him. I observe how he reacts to different situations. And I adapt, I learn ”.

A thought, which is a concern, also comes for the situation with Covid. It’s a delicate moment...

"I am very sorry that we are experiencing this situation, the whole world is experiencing it. It is very bad. As always, we must be super diligent and super respectful of the rules, not to allow this virus to ruin the championship after it has ruined our lives. We hope to beat it as quickly as possible. I will try to respect the rules, to stay at home as long as possible. I will have to train a bit, in the gym, for the next races. It is a very difficult, very bad situation in the world. We must respect the rules, and I will be the first to do so. Compatibly with my duties. I will do my utmost to attack this bastard virus"

A soft smile, but with elegance in words, Franco celebrated his feat…

Morbidelli: "It was the best race of my life, we're putting our heart into it"

"It was a race, the best race of my life. I knew I had to be aggressive. I started strong, at first there was an obstacle with Taka. But then he crashed and I had the green light in front of me. From that moment on, I gave everything until the end. During practice we did a great job. I pushed hard from start to finish. In the end I was a bit in trouble, but so were the others it seemed. I pushed a lot up to four laps from the end. The team members worked terribly hard. We worked until 10 in the evening to understand how to improve. We are putting our heart into it, we are doing well ".

It was his masterpiece: from the first lap to the end, always there to attack the glory. When he arrived at the finish he yelled with joy, blew kisses to his team. Everything was beautiful for Franco. He caressed the bike, polished it…

“It all worked out very well. The last race was our weak point, we worked a lot to improve the handling in the middle of the corner. And it showed today ”.

The hugs with Andrea Migno was wonderful, joy shared between the two friends. The Sky Racing Team VR46 rider grabbed the throttle and gave it a damn good revving...

"Mig - smiled Morbidelli - I don’t have many engines: you can't rev it like that. I tell you on TV, at least you’ll listen to me ”.

In short, it was the perfect day. Morbidelli also set his first fastest lap in the top class…

"Last year I saw a video of Celestino Vietti, and his crew chief said that Celestino was entering a magical area. I didn't believe it, at one point I even made fun of him. But today I understood what it meant. Today it all came naturally, but the level of concentration was really high. The race slid away like a glass of water. I didn’t even notice".

Morbidelli: “A Saturday like this gives me and Yamaha endorphins”

Morbidelli: “I tried to get Forcada, but Primmer is the best choice”