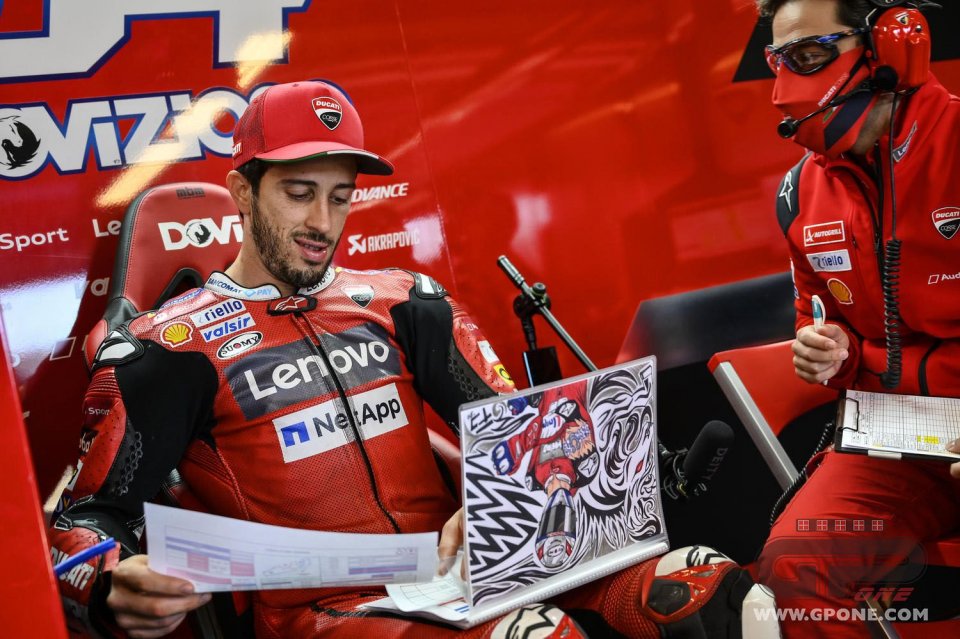 The double-header races at Aragon certainly did not give Andrea Dovizioso the results he was hoping for. Twelve points in two races represent the decidedly depressing balance sheet of what the Ducati rider has picked up in the championship, relegating him now to -28 points from the top of the standings headed by Joan Mir.

The Dovizioso who introduces himself to the journalists after the race is not disappointed, but rather resigned. He is aware of now having very few chances of remaining in the fight for the title, without, among other things, having any certainty about his future, other than not having a contract yet. His analysis, however, remains as lucid as ever, almost cold in talking about a race that has distanced him even further from a world championship dream that he came close to several times during the season only to abruptly return to a reality described in a few simple words: "The truth is that we don't have the speed to fight for the world championship."

A difficult race, yet you tried until the end. Did you make any changes to the bike this morning?

"This morning we tried something, but in the end I was slightly faster in the warm-up only because I put on a new medium tyre. In the race I wasn't slow at the beginning, but the tyre was too soft and there was a big drop for everyone. Then when you are slow you also have to squeeze the bike more and so this is what happened in the race, and I found myself completely without tyres. In the end, everything is a consequence of not riding well".

You are at -28, the world championship is not over for you yet. With what spirit do you go to Valencia?

Yet today Zarco was fast with the 2019 bike…

"This has been happening all season. I don't think there is a technical reason, but rather that some riders manage to have better sensations than others in certain situations and go faster. But in the end all you need to do is look at the championship. Bagnaia has gone very well, Zarco did too and so did Danilo and Jack. And in the end where are they? A lot of ups and downs, all the Ducati riders are where they are. And all you need to do is look at the classification to understand that. Everyone is studying, but I think that no one has found the solution yet. I think that because if someone had really found the solution, he would now be much further ahead of me in the championship. I think the situation is very similar for all the Ducati riders."

Can we say that you can't wait to get to Portimao?

"I don't like racing like this, racing for these positions. I don't like that, so in a way I have answered. It's hard to be positive thinking about Valencia right now."

World championship leader Mir has not yet won a race. Do you think this puts more pressure on him?

"I don't think the fact that he hasn’t won a race puts Mir in a particular condition, especially in a particular season like this one. The championship has been strange for many different reasons and in the end the really important thing is the points. Everyone wants to win but not everyone can do it. I don't think this is a problem for Mir. "

Do you think you have to completely give up now after this disappointing double race?

"In the end, on the one hand, it’s a bad situation because you feel you have no cards to play and you have to clash with these feelings. I'm not someone who plays games, I don't like that. But in the end you don't know what can happen in Valencia, you can’t imagine the weather conditions. For now we go to Valencia without saying that we will try to the end with optimism, because this is not the situation. But we have to try and be calm, honestly staying at home one week is only positive, we have to get away from these bad sensations and then we'll see. In November we will be on two tracks where anything can happen, even in terms of the weather".

Morbidelli has overtaken you in the standings. Do you think he has a chance of fighting for the world championship title?

"Morbidelli can fight for the title, above all because he always works very well for the race and in a season like this, where there are continuous ups and downs, anything can happen. Not that I don't think Morbidelli is up to winning the championship, absolutely not. He has a good bike, a good team and has the opportunity to fight for it, absolutely".

You always say that Motocross gives you peace of mind. Are you going to do a lot these days? And above all, have you heard from Chaz Davies?

"I'll do a lot of Motocross these days! Among other things, these days you can't even go around too much, so .... I also heard from Chaz Davies, he wrote me with the story that he wants to come and water my motocross track. He made me die laughing, he also sent me the photomontage while he was watering the track. I told him that next year we will race in motocross together, but he told me that he is pretty scarce so he just wants to work for me!".