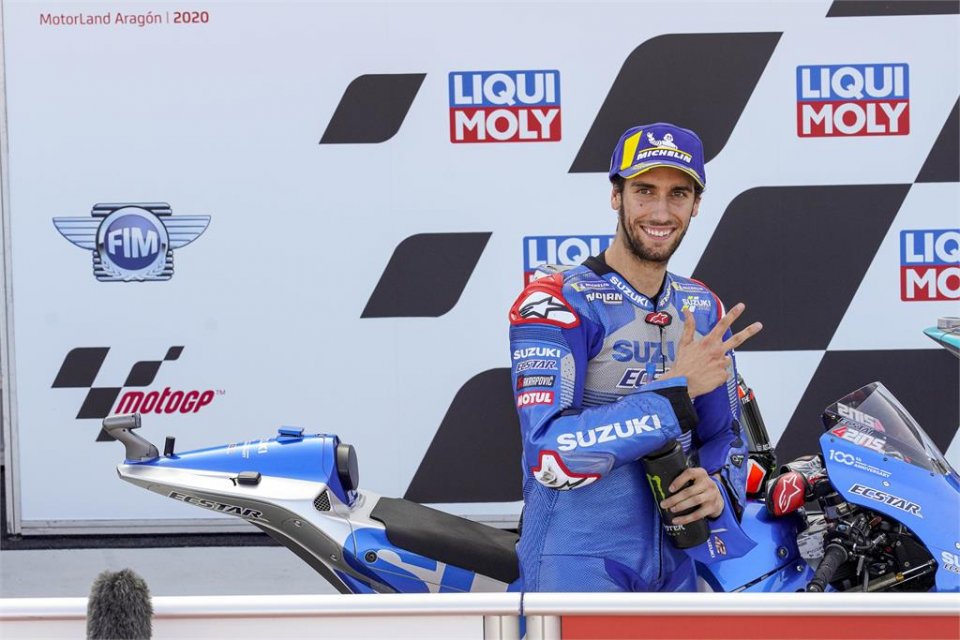 There’s a Suzuki in the front row at Aragon: Alex Rins’, and he’ll be starting third, preceded by Nakagami’s Honda and Franco Morbidelli’s Yamaha. A positive performance for the Spanish rider who gained a lot of confidence at Motorland.

“I’m happy with this Saturday, since I wanted this front row and, in the end, I managed to get it,” Alex began. “The moment I left the pit box, I ended uip n front of Quartararo. So I decided to follow him and,  if I’m in the front row, it’s also thanks to him. Besides that, I have to say that we’re more competitive compared to the last race, since we’ve worked a lot on the set-up, improving the bike. Given our performances, I’m confident for tomorrow’s race, where we can aim for a good result.”

Obviously, poleman Nakagami will be among his rivals.

“Taka has rhythm, but I hope to get off to a good start and then try to break away. We’ll have to be smart and try to get to the checkered flag with unworn tires, since that’ll be the key aspect. Compared to last Sunday, I feel more traction at the rear, and that could help us, although I prefer not to end up in front of a Ducati, since overtaking them is very complicated. The problem is that Nakagami is also difficult to overtake,” he said smiling.

Then he talked about the World Championship challenge.

“It’s a pity that this is an unusual season, without the need to be able to compete in all the races. Since the winter tests, I’ve been able to be strong with the Suzuki. In fact, we’ve always been in the top positions. Then came my shoulder injury, which particularly affected my season, making me lose important points from a World Championship perspective. But I don’t feel left out for the title, since the arithmetic still keeps me in the game. So we have to be positive, because we’re seeing the light.”