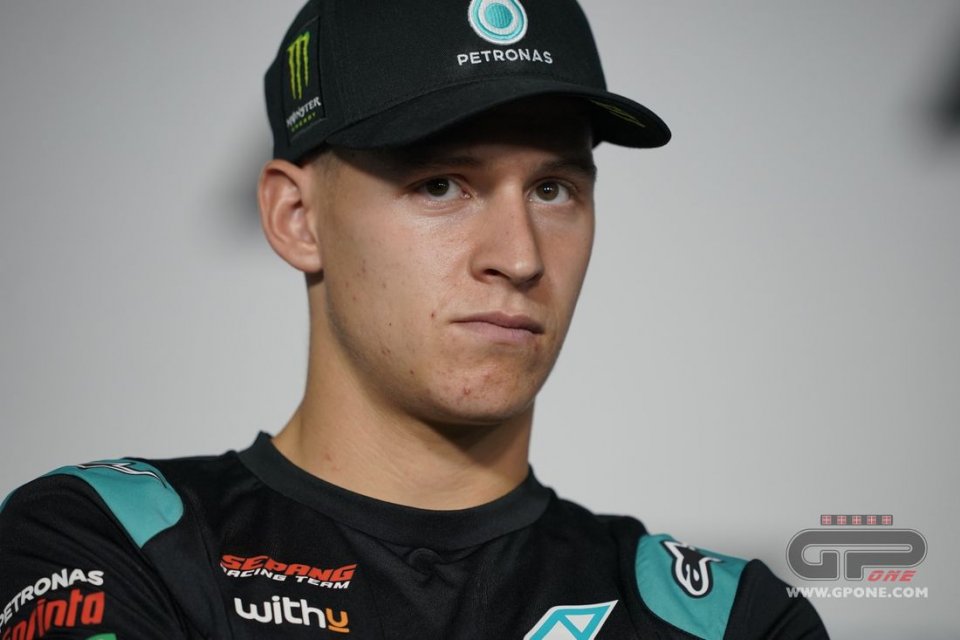 Fabio Quartararo had arrived in Aragon last week as the leader of the World Championship, now he is getting ready to start the second consecutive Grand Prix on the same track in pursuit of Joan Mir. There aren't many points to recover, just 6, but the last race was a disaster, with the Frenchman out of the points zone.

“Last weekend I had a lot of ups and downs - recalled the Petronas rider - For example, on Saturday I crashed and then I took pole position. In the race, I had a problem with the pressure of the front tyre, I had a good pace, but not enough to fight for the podium or the victory, I could have aimed for the top 5 positions. However, together with the team, we have found something positive for this new weekend ”.

Not having to be the hare in the standings anymore could help him, now the pressure is on Mir…

"The pressure is not that much, it wasn't even when I was leading the World Championship, there are still a lot of races left - underlined Fabio - Now I am 2nd in the standings and I’m fighting with three other riders racing for official teams, so I don't think that the pressure is really on me. Now I feel a little more relaxed but also confident, I'm in an excellent position. "

All that remains is to see what will happen at Aragon. So far there have been 8 different winners in 10 races, some observers are wondering who could be the ninth…

Quartararo replies with a joke: “I'd say Joan, but I don't want him to do it, so Miller,”  he said laughing.

Anything can happen and many think that Marc Marquez's absence has contributed to this climate of uncertainty. Quartararo, however, disagrees.

“When Marc Marquez is on the track you certainly have a benchmark, but now there are many riders - he specified - I don't think we are going slower than a year ago, indeed I believe that a lot of riders are going very fast. The fact is that there has been a change in the tyres and this has led to a stranger championship, the reason is not Marc's absence."

Finally, the Frenchman spoke about the fear of Covid, because coming into contact with a positive case (as happened to Arbolino on his return from Le Mans) could compromise the entire season.

"Even if between one race and the next you stay at home, until you get the negative test result you are not calm - he explained - Before Valencia I will train without going out, but this is a difficult moment for everyone".