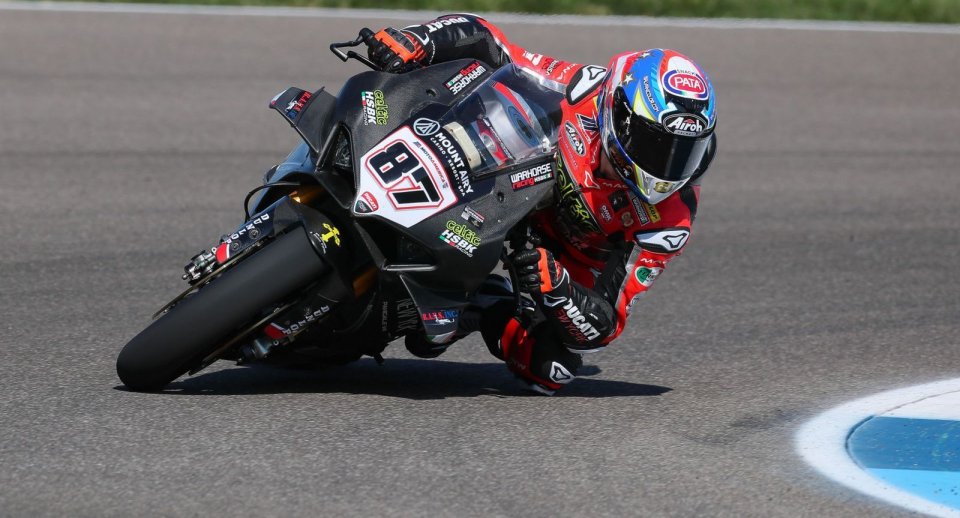 Lorenzo Zanetti has written a piece of Italian history, only not in our country, but overseas. The 33-year-old climbed to the top of the podium in Race 2 of the Honos Superbike category of MotoAmerica, with further placings in the other two races. A success that has brought Ducati back to the top of the United States after many years of absence. The last Italian to succeed was Alessandro Gramigni back in 1996, riding the 916 of the team headed by Eraldo Ferracci. Zanetti, on the other hand, took to victory the Panigale V4R of the HSBK Celtic Racing Team, a permanent presence on the US scene.

Now the man from Brescia is enjoying some well-deserved rest (or almost ..) along the beautiful warm coast of California, waiting for the next round at Laguna Seca. It’s a totally unknown circuit for him, but he will be able to get to know it these days thanks to a track day organized by the riding school of the facility, thus missing the CIV finale at Vallelunga with the Broncos Racing Team.

"After the round at Indianapolis, I should have gone to the headquarters of the HSBK Celtic Racing Team in Oklahoma. In the end I preferred to move to San Francisco, near the Ducati New York company - said Zanetti - In addition to enjoying the days relaxing, I'm taking advantage of the opportunity to do some running-in laps at Laguna Seca with a road bike in view of the next weekend. I'm sorry not to be able to race in Vallelunga, being a man of my word I feel compelled to respect all the commitments. Unfortunately my visa arrived late, it would not have been possible to return to Italy in time. As a result I decided to stay in the United States and spend some time on my own, but I feel the distance from my family a lot.”

The USA, at the same time, is one of the countries most affected by the health emergency linked to COVID-19. During the last event of the season, however, the doors were opened with good feedback from fans.

"When I raced at The Ridge, located in Washington state, the situation was quite calm - he continued - in Indy they even opened up to the public. In California, however, the number of infections is higher, but everyone uses a mask. I'm doing well. The situation is complicated and we are making big sacrifices ".

It was a victory that confirmed the current excellent personal health condition of Lorenzo Zanetti, often branded too hastily as a "second tier" rider. Instead, the 33-year-old is proving to be able to perform in any type of scenario and championship.

"Over the years I have become quite flexible, I manage to be competitive in all the championships where I race – said "Zorro"- in the ARRC (Asia Road Racing Championship) I used a V4-R, similar to CIV, finishing just off the podium in Sepang. In the Italian Championship I come from two third places at Imola, at Barcelona in World Superbike I finished in the points after having only been on the track since Saturday morning. My role as test rider has certainly influenced this aspect.”

After making his debut on the new track of The Ridge Motorsports Park, not without difficulty, the spark was immediately lit between Zanetti and HSBK Celtic Racing, both from a working point of view and in terms of support from the parent company.

"At The Ridge I raced with a completely Stock Panigale V4R, with free ECU, in the Superbike class. For the first time it was not easy, a very 'old style' track where I took home the best result I could. After this round, the team understood what my requirements were and, thanks to my impetus, they put me in a position to compete in the three Indianapolis races with a Superbike version of the V4R. We implemented some small technical measures and, with the arrival of technicians of experience such as Paolo Betti and Simone Toso (excellent connoisseurs of Lorenzo and the bike), we were able to achieve impressive performances ".

With five races disputed in the American top class up to now, Zanetti is in a position to compare the progressively improving MotoAmerica championship with those on of the Old Continent.

"Compared to the European championships, you experience MotoAmerica with less pressure. Used to other scenarios, I created expectations for myself. In terms of marketing they are really good, they insist a lot and are really careful. At the same time, they have to improve in their racing management decisions. This aspect, however, has improved dramatically in recent seasons with the arrival of Wayne Rainey. "

Despite the low number of participants, the American top class boasts riders of the highest level, also confirming itself as an excellent pool from which to draw from for the World Championship teams.

"Lately several international riders are returning to the national championships, just look at the CIV, BSB and ARRC. The level of Honos Superbike is very high: Cameron Beaubier has been winning the title for five years now, Toni Elias is a former Moto2 World Champion and, in addition, Garrett Gerloff (great protagonist in the 2019 American SBK championship) has taken his first podium in the World Championship. Yamaha and Suzuki are present in an official capacity, it was not easy to win last Sunday. Unfortunately the gap between the top and bottom teams is huge, some of the middle teams are private or amateur level. They are professional, but they lack experience, in Europe it would be considered almost like a minor championship. Compared to ten or fifteen years ago it has totally changed, once here you earned twice as much as in the World Championship, now they are working to bring it to a higher level in the future ".

By virtue of the excellent results achieved on the Brickyard, it is natural to ask whether or not MotoAmerica can become the new landing point of Lorenzo Zanetti's long career next season.

"For 2021 I have not yet made a decision, at the moment I am only thinking about making the best of this opportunity, even if Indy's results could have a positive effect in this regard. I would like to race in the United States, if I return to Italy, we will see how the situation will evolve. At Laguna Seca I hope to fight again for the top positions, I will have to learn the track quickly hoping to keep the Borgo Panigale flag high", he concluded.