Seeing his own brother Alex take the first podium of his MotoGP career from the sofa at home was certainly not Marc Marquez's plan, who would have preferred to be there on the track, fighting to perhaps even be beaten by his brother rather than watching him helplessly from home. But that's the situation and Marc at least sent a very nice message to Alex at the end of the French Grand Prix, which ended with Alex's second position giving a smile in a rookie season certainly not an easy one.

"There's always a reward for all the work! Everyone fights for their goals with their method, their style and their philosophy. The most important thing is to follow your dreams. Congratulations brother, first podium in MotoGP with this great team". 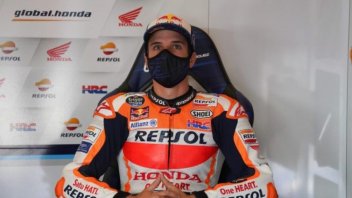