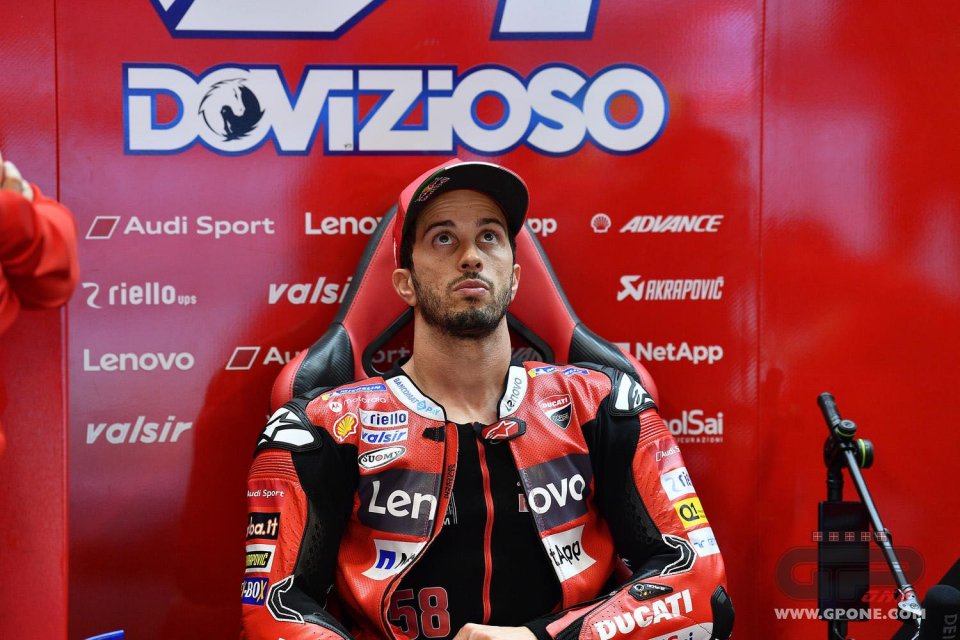 It was a bad Friday for Andrea Dovizioso at the start of the French GP weekend. The Ducati rider hadn't actually started badly at all, taking a promising fifth position in FP1. But while the first session took place on completely wet asphalt, FP2 offered a completely different scenario with dry asphalt only in patches. These were difficult conditions for Dovizioso, who was not able to interpret this situation as well as Miller, Zarco and Petrucci, and he also had a crash - luckily without consequences - which took him out of action for much of the session.

The result was a 19th position in the combined standings, but that does not mean that the rest of the weekend is compromised. The rain could in fact avoid Le Mans tomorrow and Sunday, allowing the MotoGP riders to race in a dry Grand Prix. Something that Dovizioso obviously hopes for, because the Ducati seems to be particularly competitive on the French track and the rain could represent an unknown factor for everyone.

"I crashed at that moment because I slowed down for the yellow flag, I think I let the tyre cool down - explained Dovizioso - It was difficult to ride today, the temperature was very low, the grip was very little but all in all the bike was okay. In the afternoon, the conditions were a bit more treacherous, I had some small electronic problems so I couldn't build up a pace and then I crashed. A stupid crash. I think the weekend will really start tomorrow morning. I don't think that what happened today can become a real problem, tomorrow it will be completely dry. Our base is good, I'm sure the bike will go well ".

"In reality, the track has never been completely dry. The lines were also not the normal ones, you could not follow the classic trajectories that are made here. This is why I think the weekend will really start tomorrow. We can be about two seconds faster here, so in my opinion we didn't really lose much time. "

Tomorrow it might not rain, do you think you have a very high potential in the dry?

"I think tomorrow the real problem could be the temperature because I know that tomorrow morning it might be 9 degrees and it could be difficult to get the left side of the tyre up to temperature. But in the end it will be the same situation for everyone. I don't think that the fact of having lost today can somehow benefit or disadvantage someone. In my opinion basically you will have to see who is better immediately. Those who have the ability to be fast immediately will certainly have help, they are those riders who never do a lot of work on the bike and are able to be fast right away. We will only be able to see this after FP3. "

This is a stop & go track, yet you think it is very suitable for your Ducati while this season you have often complained about new tyres and braking…

"The type of braking done here is more suitable and less problematic for my style. But I'm not sure yet. There are a lot of straight-line braking areas and this should help me even though I don't like the new tyre. We will have to wait for tomorrow to see how far it will be possible to push ".

At least this morning in the wet you were among the best again. It won't help much, but at least it's good for morale…

"It was nice to have some good feelings in the wet, but only that. The performance this morning has got nothing to do with the dry. What we saw is not the true situation. The only really positive thing in my opinion is that when there was a lot of water this morning, we all went fast with the Ducati. Already on the second exit the situation changed, but I think we confirmed to be the best with little grip and a lot of water on the track ".