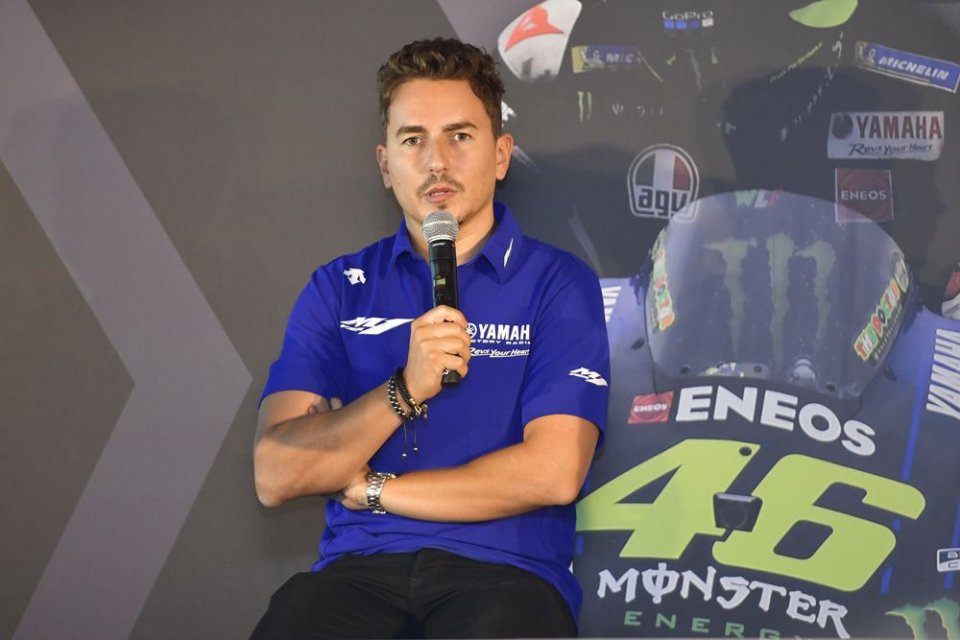 Jorge Lorenzo and Dani Pedrosa had not seen each other in a press conference for some time. It happened today, on the eve of the tests in Portimao, in which the two former racers will participate in the role of test riders, respectively for Yamaha and KTM. Tomorrow will be a very special day, in which the testers will be on MotoGP bikes while the MotoGP riders will be on road bikes.

It will certainly be interesting to see how Dani and Jorge go.

“It's nice that Lorenzo is there too - said Pedrosa - We raced together for 15 years and now we will do it again. It's more fun to test when you're not alone, and Jorge was a great rival of mine, I like that he's there”.

For Lorenzo it will be a return to the M1 after a long break.

"I’m really excited to come back again to ride the Yamaha M1, because it's been nine months, almost a year without riding and I’ve never been so long without riding, so for sure it will be quite difficult to adapt again to these speeds and bikes! But we have two days on a new track, that’s also important because it’s not only new but also especially with the up and down here, it’ll be important not to make silly mistakes at the beginning, do kilometres and try to give maximum information to Yamaha for the official riders.”

Jorge will not ride the 2020 Yamaha, though.

"A few weeks ago I spoke to Meregalli and he told me that I would have the new bike, but I went into the pits a few hours ago and saw that I will have the 2019 - he revealed - I think they did their best, but there wasn’t enough time to prepare a new M1 ”.

The Majorcan also talked about his new life as a tester.

“My life is even better than you see on social media - he joked - I'm happy, I have a lot of free time and I can decide to do what I want. For those who love motorbikes like me, if being a test rider isn't the perfect job, it comes close. I don't have the pressure of racing; it involves me about fifteen days a year and I don't have many obligations. Of course, you lose the feeling you have when you win, now my rival is the stopwatch. In the end you can't have everything in life, you have to choose and right now it's the best compromise for me ”.

Lorenzo also spoke about the championship.

“This season all the bikes can win a race, apart from Aprilia, but they are not that far away. But there is no Marquez, who has an incredible talent, he has been winning since his MotoGP debut and then continued to improve . They asked me, before his injury, if Marc would dominate again this season and I said that it would depend on Honda's improvements and those of his rivals. We saw how fast Marc was at Jerez, but we can't know what would have happened in the other circuits, his results could have been influenced by the Honda, a bike only he can win with. With Marquez out of action, many riders have realized that they can fight for the World Championship, we are facing a championship that is more uncertain than ever ”.

“Certainly without Marquez there are more opportunities to win - he said - Marc would have always been on the podium, but there would have been two more places anyway. With him it would have been more difficult to win, but the level of competition is very high even in his absence ”.

While the two Spaniards were focussing on the present, Michele Pirro spoke of the future, obviously of Ducati, which has inaugurated a new course with Bagnaia and Miller in the factory team.

"Dovizioso is a great loss for Ducati - he admitted - But, as Dall’Igna said, marriages are made in two and unfortunately someone said 'no' at the altar. Together with Andrea we did great things, but there were not the conditions to continue. There was no other rider of his experience to replace him and it was decided to focus on young riders. Pecco and Jack are the future, I think it was right to give them space ”.

Guintoli and Bradl, on the other hand, revealed some secrets about Portimao, a track they know well for their past in SBK.

“I think the riders will have a lot of fun here, it’s like a rollercoaster. - said Sylvain - It’s really nice to ride, lots of blind spots, fast, very interesting track; very technical. I think it will be an interesting challenge for the engineers, because they will have to manage the power and above all the wheelies. You don’t need much horsepower so it is a favourable circuit for the inline 4s. Manufacturers that have the SBK database will benefit from the work on electronics ".

While the Frenchman said that he doesn't think Portimao is a track that demands too much physical effort, Stefan is of another opinion.

“On this track you can never relax, even on the straight you have to fight not to make the bike wheelie - his opinion - I remember that already in SBK it was physically very demanding, but also a lot of fun ”.