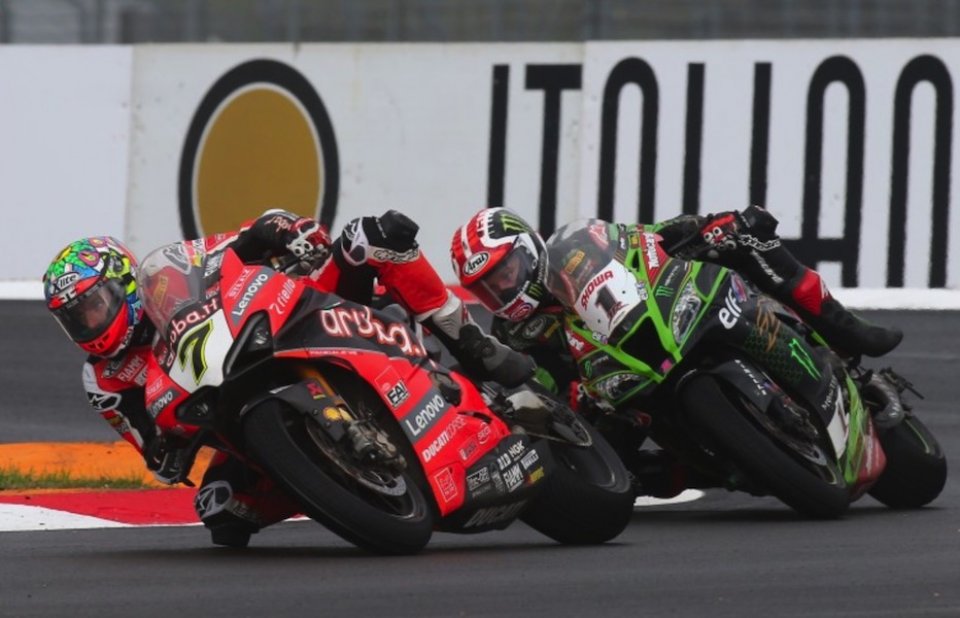 A podium to try to keep this championship “alive”. That's how Chaz Davies could have summed up his afternoon at Magny Cours, but it would have been an understatement, given the numerous topics at stake and given that, in the second race of the French weekend, the Ducati rider had to fight and defend himself from Jonathan Rea, who needed that podium to close the championship one round early.

“I tried to keep this championship alive. I closed the door when Rea tried to pass me at Turn 8, and then on the last lap, I think he made a mistake behind me. On the last lap, I was under a lot of pressure, and I would have expected a move on his part, also because the championship victory was at stake today. I knew that the points from the podium would be useful.”

Rea will win his sixth consecutive world championship. How is it racing in the same era as the most successful rider in the history of the category?

“I think about how to beat him and, to do so, you have to be perfect, everything has to be right. The effort Kawasaki makes in the SBK is incredible because they have no interest in the MotoGP, all their attention is here in SBK. To beat them, you have to do something better, and I think we can. We’re close, but something has to change.”

Do you think Ducati also thinks so?

“I’m not sure, and I’m not saying it in a negative way. I’m not saying that there’s an underlying problem. I’m just saying that, to take the next step and to beat Rea and the Kawasaki, you have to strive to be better. I think it’s possible, but everyone has to do a little better. At these levels, it’s all a matter of details. I don’t mean that you have to change this or that, but it’s the details in all areas that change a second place in the championship into a win.”

Besides the postponement of Rea’s and Kawasaki’s celebration for a victory in the riders championship, they’re really only waiting for a mathematical confirmation. With today’s podium, Chaz Davies has reopened the games for the team rankings, with Ducati now chasing at -16 and hoping to make the kill in Estoril. Could this podium also be important for the continuation of your experience in Ducati?

Another important aspect of today, and another crucial point for the Estoril race, will be the fight for third place in the riders standings. Yesterday, you had an advantage on Van der Mark while, in the Superpole Race this morning, you lost some important points. This third podium takes you to the final round with a 19-point lead.

“Reaching the podium today surprised me a bit, to be honest. The important thing for me was to secure a third place in the world championship and, this morning, I had lost some points with Van der Mark and, to do this, pushing all the laps to try to win wasn’t necessary. However, the bike seemed really good today.”

"To see everyone's level we will have to wait for the races in Europe". Mir: "the new frame improves the driveability, but we lost something under...
9 hours 59 min ago

The Noale manufacturer, currently testing in Qatar, has mounted sensors on the RS-GP that are mainly used in F1
16 hours 14 min ago

“Is the Honda difficult? All MotoGPs are. It depends on the rider. Tonight my head will work a lot, and tomorrow it’ll be better.”
22 hours 51 min ago