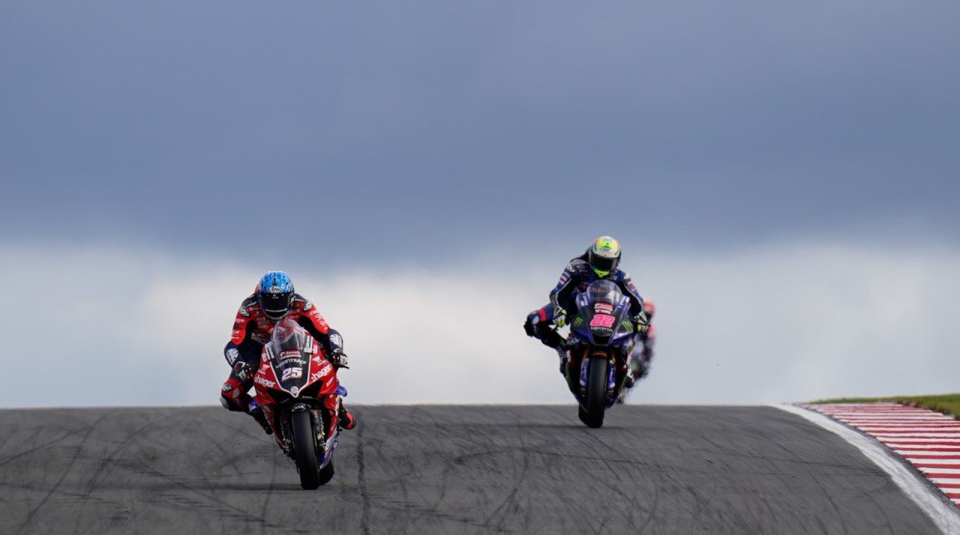 With three races condensed into a single day, the fun was guaranteed on Sunday at Donington Park. In pure BSB British Superbike style, there were some very tight races in which excitement and surprises were the name of the game. If this was meant to be weekend of redemption, for Glenn Irwin it was certainly not. His clamorous mistake during Race 1 completely reshuffled the battle for the championship, effectively leaving the doors wide open for Race 2 winner Josh Brookes. With Andrew Irwin's return to success in the first encounter, Tarran Mackenzie won in the last. Here's what happened.

Glenn Irwin on the ground, his brother Andrew gets the better of the two VisionTrack PBM Ducatis in Race 1

Despite the race being postponed to today due to the heavy rain on Saturday afternoon, the BSB challengers again found the track in rather particular conditions and difficult to interpret. With the asphalt still slightly wet from the rain that fell yesterday and last night, everyone opted to start with rain tyres.

After the lights went out, the first of the three scheduled races started with a sensational twist: a crash by Glenn Irwin. Starting perfectly from the second grid slot, the 30-year-old from Carrickfergus set a good pace right from the first corners. At the end of the first lap, in an attempt to break away from the chasing group, Irwin crashed at the entrance to Goddards when he lost the front end of his Honda . 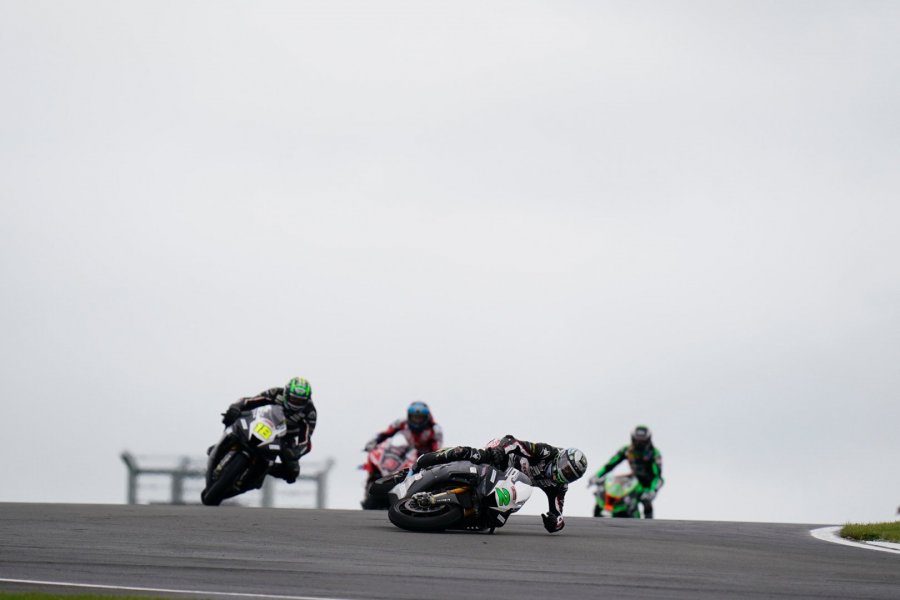 Irwin’s big mistake further reopened the championship after his retirement two weeks ago at Oulton Park, and his crash allowed his brother Andrew Irwin to take over at the front.

With an increasingly drier line as the laps went by, the 26-year-old from Carrickfergus perfectly managed the deterioration of his rain tyres, responding to the challenge of the two VisionTrack PBM Panigale V4Rs of Christian Iddon and Josh Brookes. The two riders of Paul Bird's team tried in every way to attack the first position, but the Honda Racing UK man was able to defend his advantage.

For Andrew Irwin, it was the third win of the season, all obtained at Donington Park (two on the 'National' circuit and one on the 'Grand Prix' layout), a great way to silence all the criticism that has come his way in recent weeks.

The brothers were the protagonists of Race 1, from every point of view: Andrew's happiness was contrasted by Glenn's frustration and disappointment for his first real mistake of 2020.

Christian Iddon and Josh Brookes completed the podium. Both were satisfied with their results, without taking any unnecessary risks and collecting vital points for the championship. 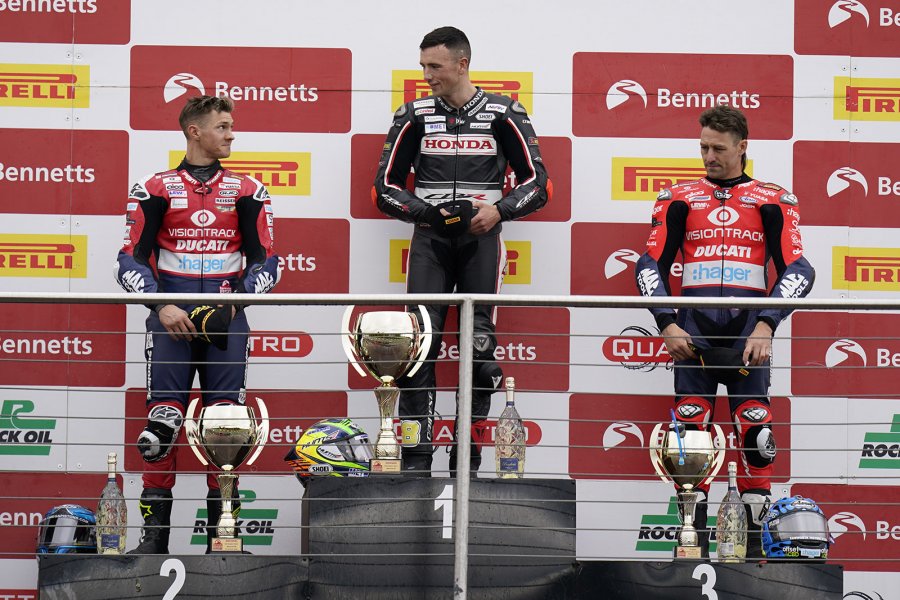 Fourth position for Tarran Mackenzie (McAMS Yamaha), who finished ahead of youngster Ryan Vickers (RAF Regular and Reserves Kawasaki) and Gino Rea (Buildbase Suzuki) at the finish line, recovering after being one of the few (together with Kyle Ryde and Jack Kennedy ) to risk mounting an intermediate tyre at the rear. 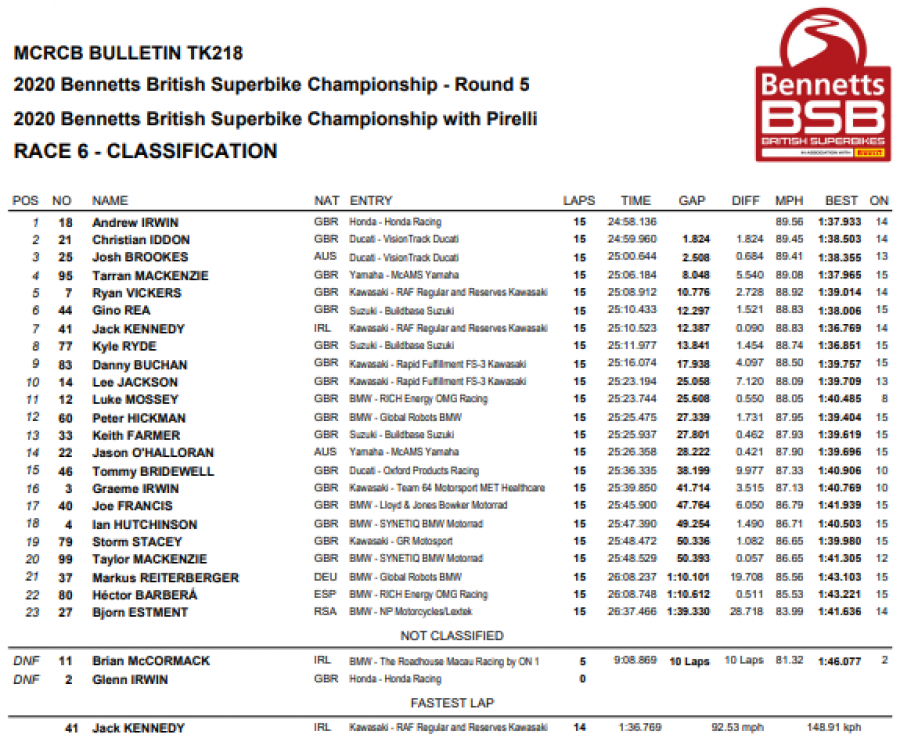 In Race 2 Josh Brookes takes the victory and championship lead

With the climatic conditions gradually improving, the remaining races (finally) took place on a completely dry asphalt, starting from Race 2. If Sunday had opened in an exciting way, the second race was not far behind. At the end of a very long battle, Josh Brookes took home a hard-fought win, leaping to the top of the riders’ standings in the process. 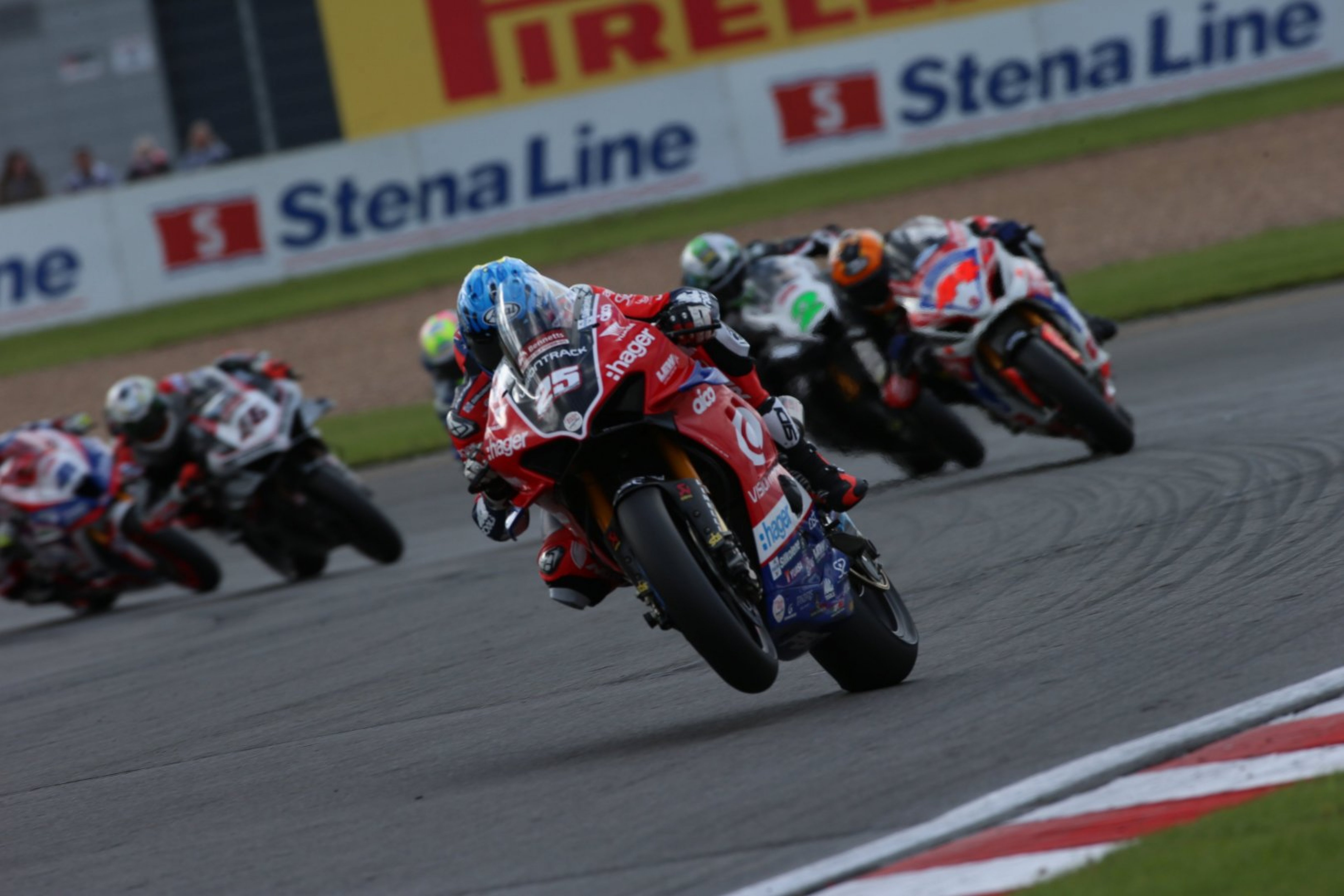 When the lights went out, the VisionTrack PBM Ducati rider immediately slotted into the top positions, letting his direct opponents let off steam in the early laps. After a brief study and tyre management phase, the 2015 Champion proved to everyone that a BSB title is not won by chance.

Thanks to a surgical overtaking move on the surprising Gino Rea, for the first time in the lead of a BSB championship race, Brookes started to push hard building up a considerable lead of about two seconds.

Behind him, there was a terrific scrap for second place, which rewarded Jason O'Halloran. The McAMS Yamaha rider, fresh from a disastrous Race 1 in which he finished in 14th place, showed impressive pace that allowed him to recover in the final stages: with a series of fast laps he took the chequered flag just half-a-second away from Brookes. Also on the podium was the second YZF-R1 of Steve Rodgers' line-up, in the hands of Tarran Mackenzie. 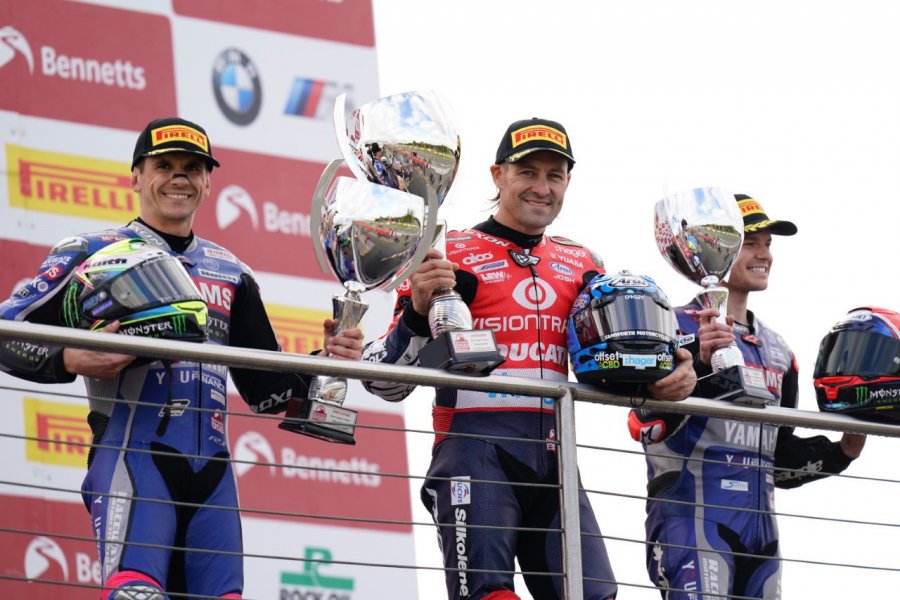 It was another race to forget for Glenn Irwin, who started in a determined way from the eighth slot on the grid. Although he fought for the podium for a long time, Irwin had several problems with the tyres in the final laps and finished in seventh position.

A worse outcome befell his brother Andrew, who crashed due to a contact with Ryan Vickers at the Melbourne hairpin during the opening lap. Something similar happened it Peter Hickman (Global Robots BMW) and Danny Buchan (Rapid Fulfillment FS-3 Kawasaki), who crashed at the same time a few metres later. 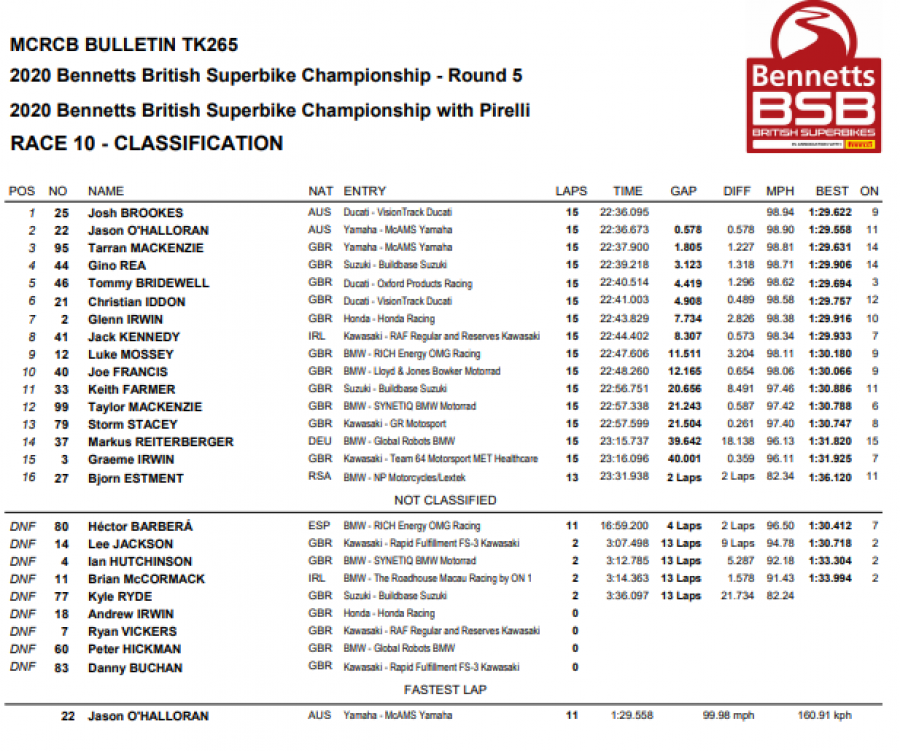 The final British Superbike race at the East Midlands track saw Tarran Mackenzie back on top form again for the first time since Race 1 at the Silverstone 'National' circuit. The McAMS Yamaha rider edged out Glenn Irwin and Josh Brookes in the end, as a result slotting himself perfectly into the championship battle. 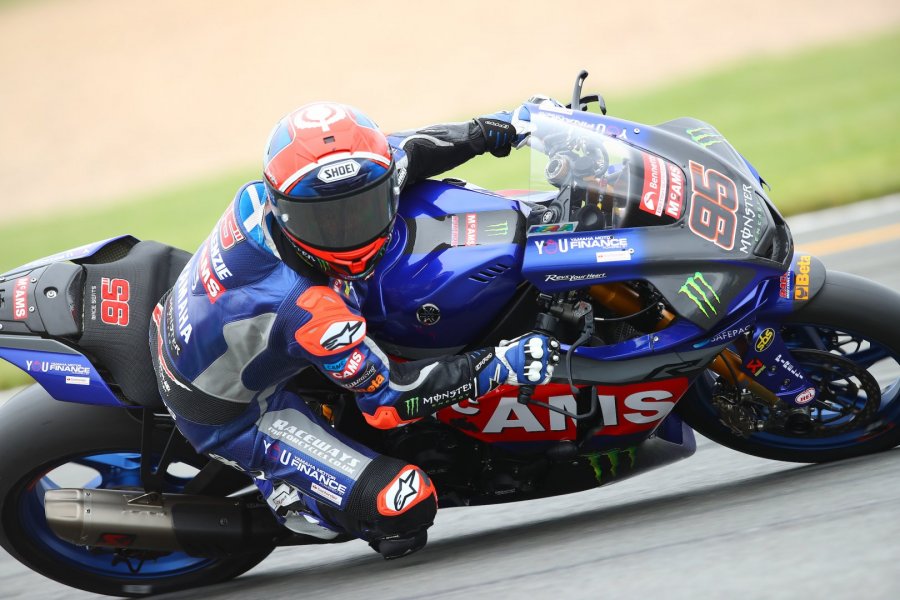 The son of Niall Mackenzie made the most of his start from the front row, putting himself behind his much more experienced rivals. Despite a quiet first few laps, the fight for victory soon narrowed down to three riders.

Starting from lap 12 of the scheduled 15, "Taz" literally cut loose, overtaking first Josh Brookes and then Glenn Irwin at the entrance to Coppice.

It was a superb attacking move that allowed Tarran to head for his second win of the season, his third in BSB.

At the flag he was ahead of Glenn Irwin by more than a second, a runner-up position that saved the weekend for the now ex-championship leader.

Race 2 winner Josh Brookes looked as if he might take a double win, but, in the final laps, he had to give up the chase and settled for another third position, and 16 crucial points in view of the last round of the season. 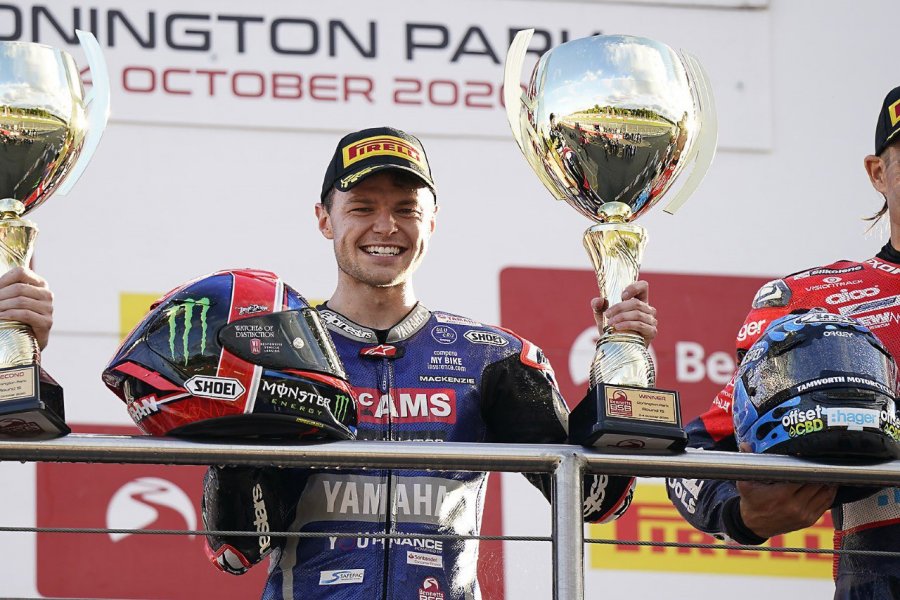 Fourth position went to teammate Christian Iddon, but some way away from the fight for the podium. Behind him, another encouraging race for Gino Rea, by far the best Suzuki on the grid, and Lee Jackson (Rapid Fulfillment FS-3 Kawasaki).

It was an uphill struggle for Jason O'Halloran, involved in a contact with Iddon that bent the left handlebar of the bike. For the Yamaha rider an eighth position that left him with a lot of disappointment. The outcome was even worse for Tommy Bridewell, who retired due to a technical problem on his Ducati while he was fighting for the win.

After this chaotic weekend at Donington Park, BSB British Superbike will be back in action in two weeks’ time (16-17-18 October) for the Brands Hatch grand finale. Josh Brookes leads with 226 points, 16 points ahead of Iddon, 18 over O'Halloran, 19 over Glenn Irwin and 46 over Tarran Mackenzie, the rest of the riders out of the battle. It's difficult to predict, but with only three races to go and 75 points up for grabs, anything can still happen. 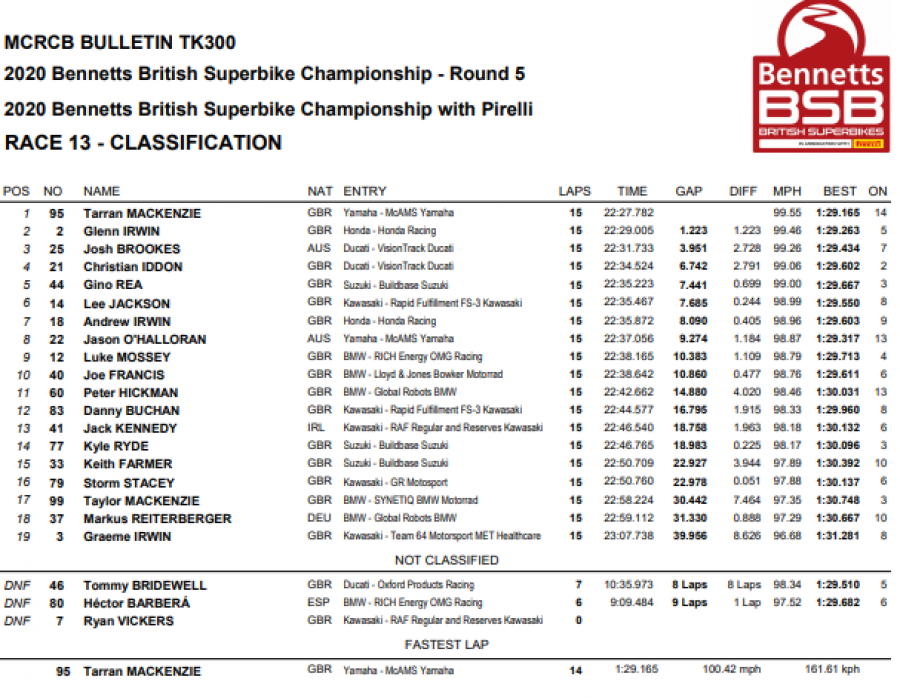 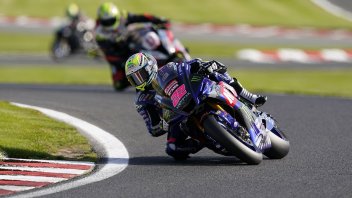 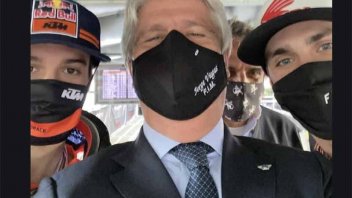