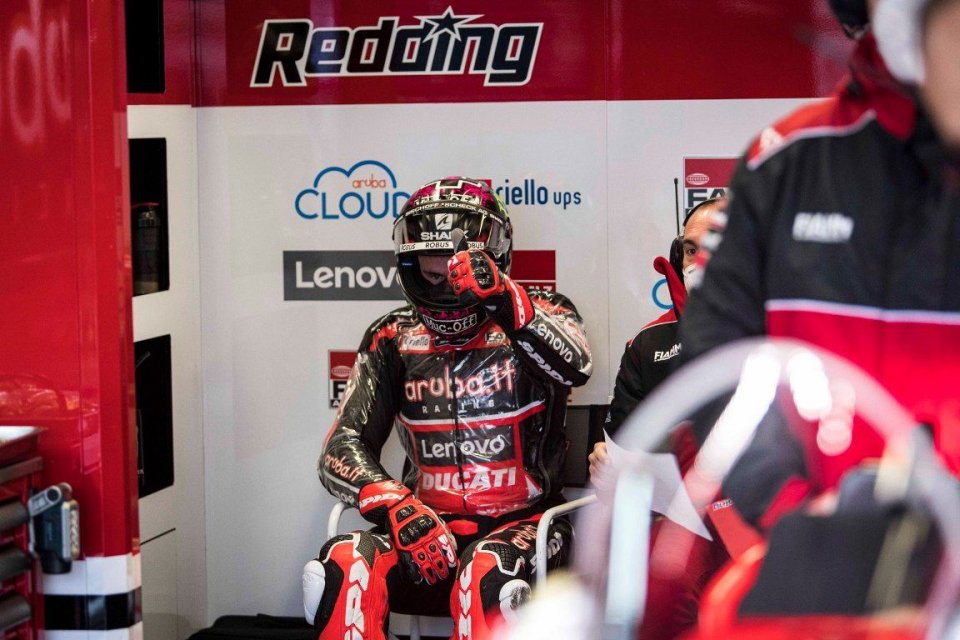 Scott Redding was called to the chase on Friday at Magny-Cours. The wet track and the Pirellis put the Aruba rider to the test as he had to deal with conditions never before seen. It had also rained in  Barcelona, but temperatures in France are much lower than in Spain, as was the intensity of the rain.

At the end of the day, #45 had to console himself with a 7th time, one second from the top.

“Unfortunately, I don’t have much experience with the Pirellis when it’s wet,” Scott began. “Rea, on the other hand, showed he’s confident in these conditions, given the experience he’s accumulated over the years. Personally, I have to say that I improved in the afternoon, trying to be more aggressive in the long corners, even if I’m a bit far from the fastest.”

Scott then talks about the work that was done.

“We worked on the electronics and some components during the free practice sessions. The fact is, I know the Michelins and the Bridgestones but not the Pirellis enough. When it's wet, if you work in a certain way, you can have great grip and confidence wit the Michelins. But I have less confidence at the moment with the Pirellis and, consequently, I have to figure how they react.”

As we mentioned this morning, Redding had ridden at Magny-Cours lately.

“I tested here with the road bike, and it was also raining. On that occasion, I was able to learn the track, trying to get to know it for this weekend. Obviously, the road bike is very different from the one I ride on the race weekend. I was curious to see what Magny-Cours was like and, in the end, I have to say that it’s nothing shocking.”

“We’ll see what happens based on the weather conditions. Saturday will probably be my first race when it’s wet, so I’ll have to stay calm. In these conditions, I have everything to lose and gain in the challenge with Rea. He's proven to be very fast in these conditions like no other.”

But Scott doesn’t want to surrender his weapons ahead of time.

“Today, I tried to understand how strong I can be with these tires, trying to find the limit. I’m fast when it’s wet. The fact is that I don’t know the limit of these tires. Unfortunately, I don’t have much time to get to know the bike and the tires. The other riders have more experience.”

“My goal at Magny-Cours is to try to be fast, aiming to gather information for the future and understand what can happen. For sure, anything can happen in the race. But now I have to understand what the limit is, trying to have everything under control for next season.”

It was definitely worse for Chaz Davies in Ducati, since he was left out of the top ten.

“It wasn’t an easy day because of the weather,” he stated. "In the end, however, I managed to take a step forward with the new rear tire. More than on the time, I worked to understand the tires today and the sensations on the bike, so tomorrow I’ll try to open the throttle to be with the best.”

Fast By Prosecco Valencia, Pernat: "They could have called it Valentino...