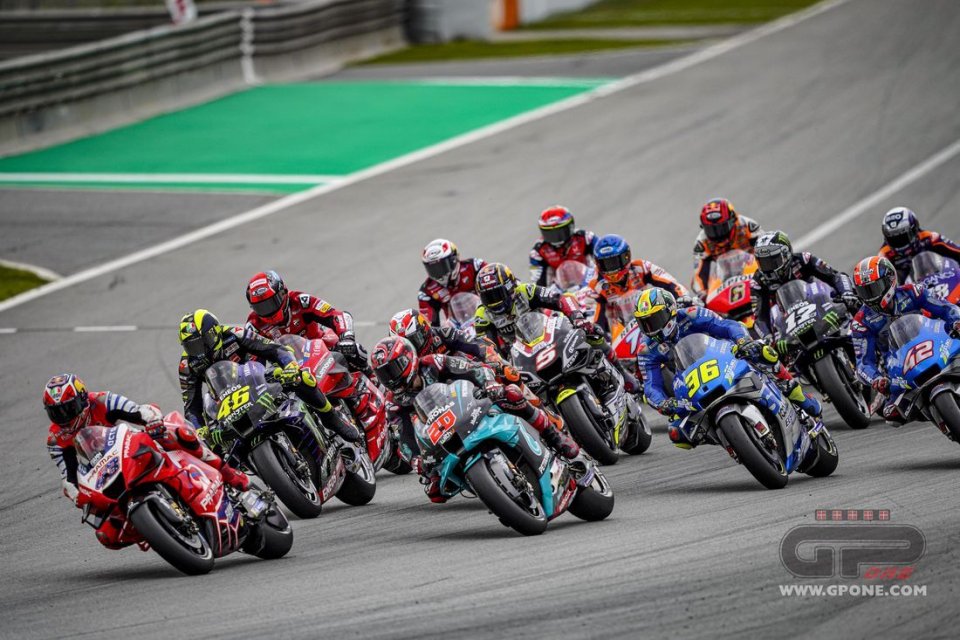 The strangest championship in recent years is heading towards the final rush with 6 races in 7 weeks and uncertainty that still reigns supreme after the first eight GPs. At Barcelona, the classification is starting to take shape, but talking about real favourites is still complicated, even if Quartararo and Mir seem to have a few more cards to play.

Fabio is the only rider to have won more than one race in 2020, in fact he has taken home 3, while all his rivals have not gone beyond one. Joan, on the other hand, is the one with the most podiums: 4, against the 3 of the Frenchman, who this year has climbed those steps just to celebrate the victory.

Below we have graphically rendered the progress of the championship to date and those coloured lines show exactly how the balance in the standings has continually changed race after race. 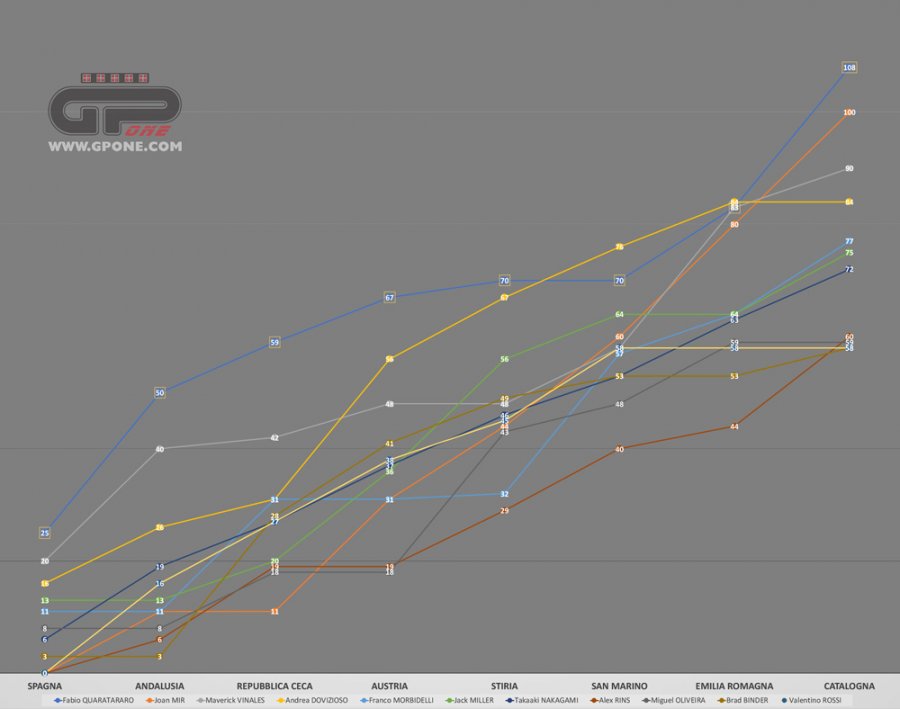 At the highest point of the graph, now, is Fabio Quartararo, who seems to have recovered after a few below-par races (from Brno to the crash at Misano). His breakaway win at Barcelona allowed him to get ahead in the championship too, but Mir is only 8 points away.

Many observers (starting with Dovizioso) see Joan as the most concrete rider at the moment and indeed, from the first race in Austria onwards, his line is the one that has gone up most rapidly and steadily. If we analyse the last 5 Grands Prix, his points average is 17.8 per race, while Quartararo's is 9.8. The average for Vinales (3rd in the standings) with 9.6 points per GP is very similar to the Frenchman, while Dovizioso has done better, with 10.6 despite coming away empty-handed in the last GP.

Pure speed therefore rewards Fabio, but Mir is the rider who has found the best balance between performance and consistency of results. Not throwing away points is in fact even more important than usual this year, proof of which is the 7th place in the standings of Nakagami, the only one to never have reached the podium of the top 13 riders in the championship standings, but also the only one to have scored points in all races. ‘Slow and steady wins the race’ one could comment with more than a hint of irony…

So let's go back to the two most accredited contenders for the title and discover another difference between them, this time in qualifying. As you know, for the fastest rider on Saturday at the end of the year there is a free BMW and for this reason an award classification is drawn up, using the same score as the race. Vinales has been the best so far, with 147 points against Quartararo's 144. Mir, on the other hand, is only 8th, also behind Valentino Rossi, a rider who has never had a ‘hell-for-leather’ lap as one of his best qualities.

Logically, it cannot be argued that Mir is 'slower' than Quartararo, but only that they have different characteristics, as do their bikes. Making the most of them will be the key to winning, even if it is difficult to exclude other riders from the battle. Vinales is 18 points behind his brand mate, Dovizioso 24, even Miller and Morbidelli, at 31 and 33, cannot be ruled out. With two double races in Aragon and Valencia and the unknown factor of Portimao as the grand finale, anything can still happen.

It will be a war on a knife-edge, but also one of nerves. Quartararo in this sense has shown some limits, suffering pressure after the double win at Jerez. In Barcelona he seemed to have managed to chase away his demons, but the Frenchman has never fought in the world championship for a title, unlike Joan, who won it 3 years ago in Moto3.

The lines in the graph are bound to cross again…