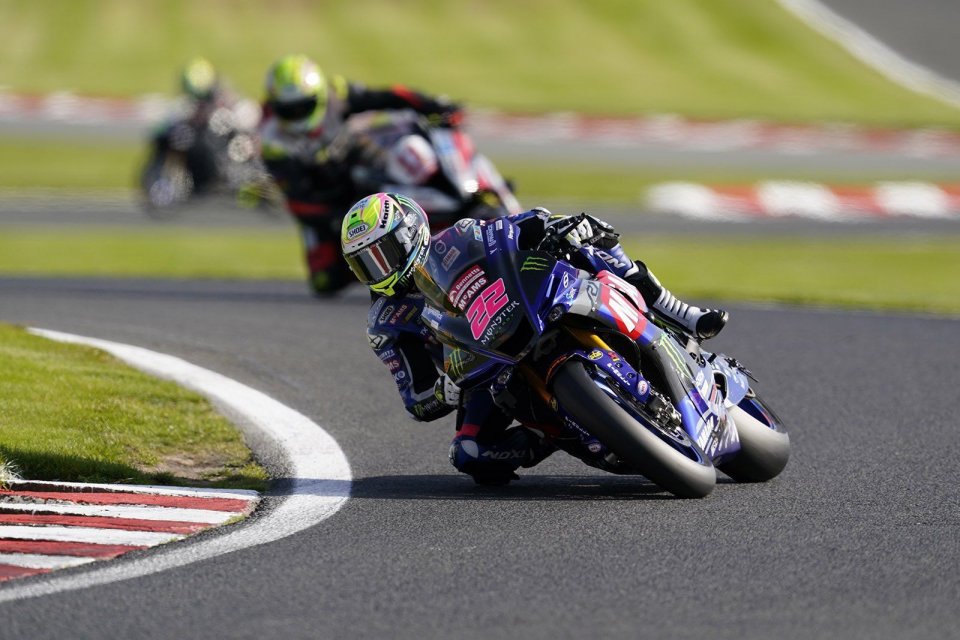 The BSB British Superbike has once again confirmed itself as the most spectacular and hard-fought national championship on the planet. With the last two races staged on the ups and downs of Oulton Park, the protagonists of the British top class are preparing to experience a season finale marked by uncertainty. With today's victories going to Jason O'Halloran and the ‘revenant’ Josh Brookes, thanks to the retirement of championship leader Glenn Irwin in Race 2, the classification now sees four riders in just 12 points. Here's what happened.

After taking the victory in Race 1 yesterday afternoon, Jason O'Halloran (McAMS Yamaha) was not satisfied and in Race 2 he conceded an encore continuing his unstoppable performance this weekend. Although the podium perfectly replicated that of the first heat, this one proposed four riders a step above the others: O'Halloran, Iddon, Buchan and Brookes.

With O'Halloran in the lead from the first corner, behind him both the VisionTrack PBM Ducati's two V4Rs were competitive again. Josh Brookes, after a first race to forget with eighth place, in the morning warm-up finally found the right technical compromise to better tackle the ups and downs of Oulton Park.

The pace kept by the leading peleton was impressive throughout the race, just think that they finished more than ten seconds ahead of the rest of the group.

O'Halloran then defended himself well from the final attacks of Christian Iddon, Danny Buchan (Rapid Fulfillment FS-3 Kawasaki) and Josh Brookes, with the latter struggling with the tyres in the final laps.

On the finish line ‘O'Show’ preceded Christian Iddon by just 214 thousandths and by a second, Danny Buchan, with Brookes more distant. For Jason O'Halloran, it was his third career victory in the UK top class, the second for Steve Rodgers' team, strongly relaunching his own chances of taking the title.

The Australian's happiness was offset by disappointment for Glenn Irwin (Honda Racing UK). In fact, in a race with few passing moves, it was the retirement (the first of the season) of the points leader on lap 13 of the race which held sway. Seventh up to that point, the eldest of the Irwin brothers sensationally returned to the pit lane due to a technical problem on his CBR 1000RR-R. For the 30-year-old from Carrickfergus it was a big zero, which has reopened the battle for the conquest of the riders’ title.

VisionTrack PBM Ducati 1-2 with Brookes and Iddon in Race 3, Jackson edges out O'Halloran

On the eve of this round, many experts had defined the Oulton Park track as "pro Ducati" and, instead, until Race 2 the superiority of the Panigale V4R was nowhere to be seen. The introduction of the new Pirelli 200/65 specification is creating several problems for the riders of the Borgo Panigale bikes, but, in Race 3, they came back in fine style.

Making the most of his start from pole position, Josh Brookes climbed back to the top step of the podium after his victory in Race 2 at Snetterton. Despite the glaring difficulties in adapting to the new larger tyre, even in the last race the Ducati riders were able to salvage the weekend.

With the 2015 category champion in command, teammate Christian Iddon soon found his way behind him, rocketing away from fifth on the grid.

Faced with 18 tough laps, Iddon was on top form and on lap 8, he tried to overtake Brookes at Lodge without success.

It was a very important victory for the Australian from a moral point of view for the rest of the season, career win number 51 in British Superbike, which came at the end of a day that saw him completely revolutionize the set-up of his bike during the morning warm up.

With Christian Iddon completing the 1-2 for VisionTrack PBM Ducati, second for the third time in a row, a great battle for third place raged between Lee Jackson (Rapid Fulfillment FS-3 Kawasaki) and Jason O'Halloran (McAMS Yamaha).

The youngster, returning to the UK top class, defeated the winner of the first two races of the weekend by just 96 thousandths, taking his first podium of 2020.

Fifth position went to Danny Buchan (Rapid Fulfillment FS-3 Kawasaki), over ten seconds behind the leading group, ahead of the championship leader Glenn Irwin (Honda Racing UK). The 30-year-old from Carrickfergus preferred not to take unnecessary risks following his DNF in the previous race, taking home 10 useful points for the championship.

The riders’ standings sees Glenn Irwin still in command with 178 points, 2 points ahead of O'Halloran (overtaking Jackson), 10 over Brookes and 12 over Iddon. With six races left to go, the battle for the title promises to be more exciting than ever. Next appointment at Donington Park (this time on the Grand Prix layout) on 2-3-4 October.

Quartararo: “I won the title in Misano, I have to focus on the championship”