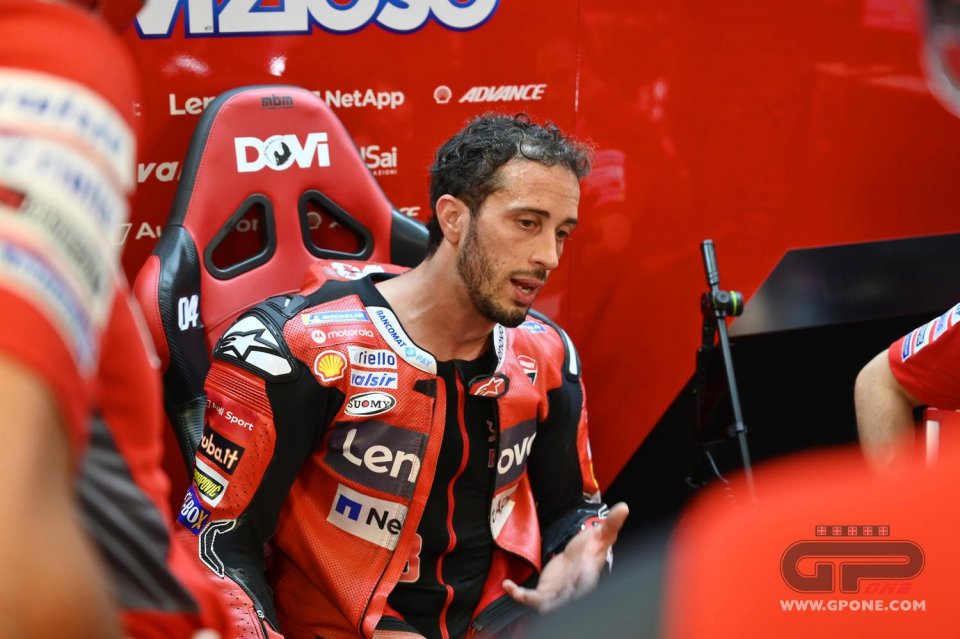 Andrea Dovizioso goes away from Misano as leader in the world championship standings. Reading this brings to mind two triumphal weekends on Ducati’s home track, perhaps topped off with podiums and victories, inflicting heavy defeats on their opponents in the fight for the title. But the reality that emerges is very different…

The reality sees Dovizioso as world championship leader without ever being in the hunt at Misano, with a seventh and an eighth place to his credit that would have been two disappointing results to say the least in 2019 and in previous seasons. In this strange 2020, however, these results are enough for him to take and then maintain the leadership of the ranking. Andrea continues to point the finger at the 2020 Michelin tyre, claiming it distorts the values ​​on track. But at the same time, as he is an intellectually honest person, he admits that at this moment Pecco Bagnaia is the only one able to make the most of the Ducati GP20-Michelin.

Speaking with journalists at the end of the race, Dovi appears to be split down the middle: a rider who knows full well that he is in his current position more due to the demerits of others than for his own merits. Marquez's absence on the track has undoubtedly given him the clearest chance to win the title before saying goodbye to Ducati. But is Andrea really making the most of it? The rider from Forlì is probably asking himself the same question over and over again, continuing to invoke the need to go against his instincts to ride this bike and especially these tyres to the limit. Destiny is strangely ironic, because in the past Dovizioso's innate ability to manage the tyres had allowed him to score a lot of victories. Today, precisely at the moment that had to be his and his alone, the tyres are the main rival to beat on the track rather than an ally in which he can trust to launch his title attack.

You look at the standings and you’re first. It might almost be funny seeing how things are going in the race…

"Looking at the classification today makes me laugh - confirms Dovizioso - because it is difficult to be first in the standings by going slowly. But this is what is happening, it is funny but we have been good in some races to bring home the points. We continue to work to improve and learn to adapt where we are not yet succeeding".

But being first halfway through the championship must mean something…

"We are halfway through the championship, but it would be better to fight for the podium in the next races than to stay in front without really having the speed to lead the world championship. It is frustrating because we are working so hard to adapt to the new braking style we need. On the data it is clear what it takes, but in fact it is difficult to apply everything. I was a bit more consistent than in Misano 1, but I still don't have the speed to improve the situation. We are not in the situation to really fight for the championship. We are certainly in the right position to do it and we will not give up, because I know that on each track there can be a different story. In Barcelona everything will be different from today, we must always be ready.”

Dovizioso: "It’s wrong to call this championship a low level, only the riders know the reality"

Some observers think that this classification reflects the low level of the championship without Marquez. What do you think about it?

"It's wrong to say that this championship is at a low level . Just look at how close all the riders are, this can mean two things: either all the riders in MotoGP are poor, or they are particularly strong. We are always close, both in qualifying and on race pace. There is a difference of a few tenths from the first to the fifteenth. How can you say that the level is low, also because we are talking about the same riders who have won in previous seasons? So even then the level was low? In my opinion, only the riders can talk about low or high level, because you don’t know all the details if you are not on the bike, so you should focus on other details and not talk about these things.

But what do you think Marquez would have done in this championship? Would he have dominated, or suffered like everyone else?

"I would be curious to see Marquez with these tyres. In Jerez he showed domination, but in reality it means little or nothing because nobody will find out about him this year, so it's pointless to make any considerations. Of course he was very fast at Jerez, but if we analyse things logically, how did his tests in Qatar go? Very bad. Then in the first race he was eight tenths faster than everyone else while recovering? Jerez may not have given us a real idea of his potential, but the point is that it is these tyres that have created this situation. From testing to the first race. For me it is logical, everyone can have their own ideas but these are objective data".

Have the 2020 Michelins upset things ​​so much?

"I've been saying this for a long time, these tyres don't work the way I've ridden for the last three years. The set-up of the bike we've been using up to now also doesn't work, so everything is different. You have to have a different set-up and you also have to ride differently. You really have to ride against instinct, it's not an easy thing to do when you're riding a MotoGP bike. I try, but I end up not feeling good in the saddle. It happens to all the Ducati riders who were strong under braking until 2019 ".

Dovizioso: "I study Bagnaia's data, he's the only one to ride the Ducati as it should be ridden with these tyres"

"I keep studying the data from Bagnaia, who rides this bike with these tyres in a different way than the others. He brakes less and later, applies less pressure and enters the corners fast. It's a different thing from what we did before. He is doing it very well and is making a difference. "

Looking at your rivals, the growth of Mir and the Suzuki is somewhat impressive. Is he a real candidate for the title?

"The Suzuki is very balanced, from what you can see it is an easier bike for the riders, it allows them to be very consistent and also to preserve the tyres to be very fast at the end of the race. This is why they manage to be so fast at the end of the race. At least it seems that way from the outside. Then Mir is a great talent, I have already said that in the past. At this moment he is the most dangerous of all for the title, we have seen that for a few races now. At Misano he stood out even more, let's see how he will go at Barcelona ".

After the tests it seemed that you had found the key to solving the problems. What happened?

"A rider must always tell it in a certain way. When you get kicked around and then throw yourself on the ground, you can't be a rider. You have to keep pushing even when things are not going well and maybe even tell a few stories. We are not just passing the time; we are working hard but it is difficult. For me, all this is happening because of the tyres. In recent years we didn’t have these tyres and there has never been a championship like this. As a result, it’s these tyres that are creating the ups and downs. Vinales struggled at Misano 1 and then won Misano 2, what does this mean? Then it must be said that this is the situation for us as it is for everyone, so we must continue to work and try to improve it. Of course, I am first in the standings having made few important results, but this is the situation. It is not over; I have to continue to believe. I can’t put myself down by being too realistic and analytical, that’s not what we need at this moment.”

BSB: Iddon before the rain on day 2 at Snetterton, BMW impressive