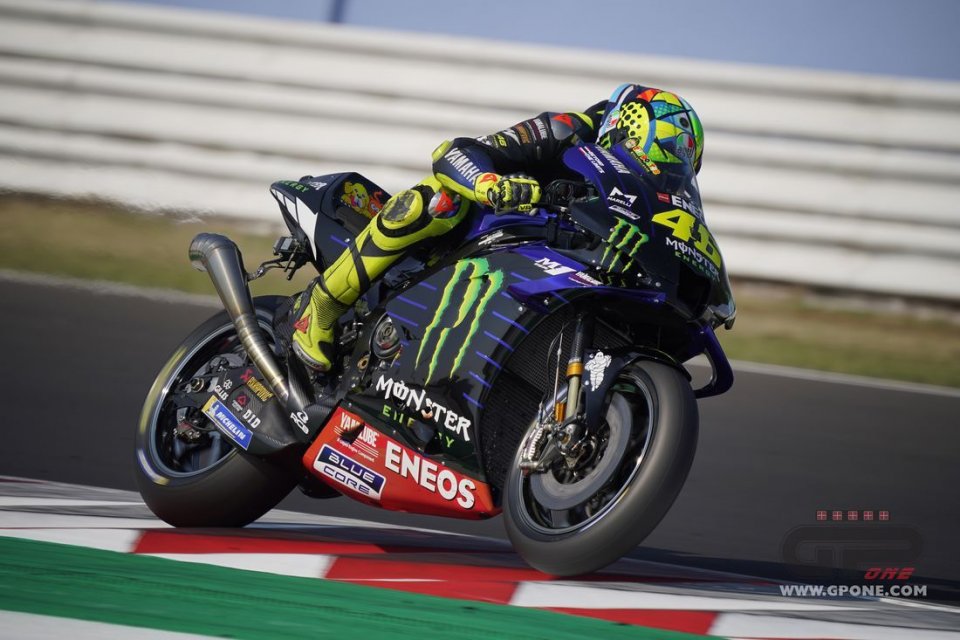 On social networks, the new muffler brought by Yamaha sparked off a lot of irony, often with it being compared to a stovepipe. Credit must be given however to the Iwata technicians for having worked to try to improve the M1's weak points, especially the top speed, which is not easy with the development of the engines frozen until next year.

In the Yamaha garage, however, the exhaust system was not the only novelty, with also updates to the chassis and swingarm.

Looking at the classification, one might be surprised by the results however, with Vinales 1st and Rossi 17th, but Valentino Rossi never thinks about outright performance during the test days.

“We did a lot of hard work today, I did many laps, because we had a lot of different stuff to try,” he said at the end of the day. “The test was not so bad. We worked on the bike. As always, out of all the things we tried, some were an improvement, others weren‘t. But overall it was a good test. We found something that was positive, so we will try to be stronger for the upcoming weekend.”

Maverick Vinales was busy trying a lot of things, besides the frame and swingarm, even the index finger rear brake.

“I‘m still a bit disappointed about what happened on Sunday, because also today we were strong,” admitted the Spaniard. “Even after I crashed, I immediately did a fast lap afterwards, I was able to ride a 1‘31-medium. I rode that best lap time with the new parts, and it feels like it can maybe help me gain something for the race. Already last week the bike was really good, and it‘s difficult to improve it. With the new part I can ride the same lap times, but much more relaxed. This is a positive sign. It means that if I need to push, maybe I can ride a little bit faster. During this test we solved the problem with the graining that I had with the medium tyre, so for sure we will try to ride more with the medium tyre this weekend, but also the soft worked really well. I could do many laps and I finished the session with some 1‘32-low laps, which is really good for us. We just need to understand why I lose grip during the race and feel like I‘m riding on ice, because if that‘s fixed, I can ride very fast and hit really good lap times without being on the limit.”

“Overall, it was a productive day,” he said. “We had a long list of components to try here, including the chassis, rear arm, muffler, finger rear brake, and some setting tweaks. Both riders did a lot of laps, which was necessary for us to be able to check all the items. We also used this test to try a tyre combination that we might consider for the next race – hard front, medium rear – that unfortunately we weren‘t able to try last weekend. The new chassis didn‘t bring to the table what we expected, and we decided to use the current chassis for the remainder of the season. We will use the next few days to study today‘s data. If we confirm the riders‘ feelings in the data, Maverick and Valentino will already start FP1 with some of the other new items that we tried today.”