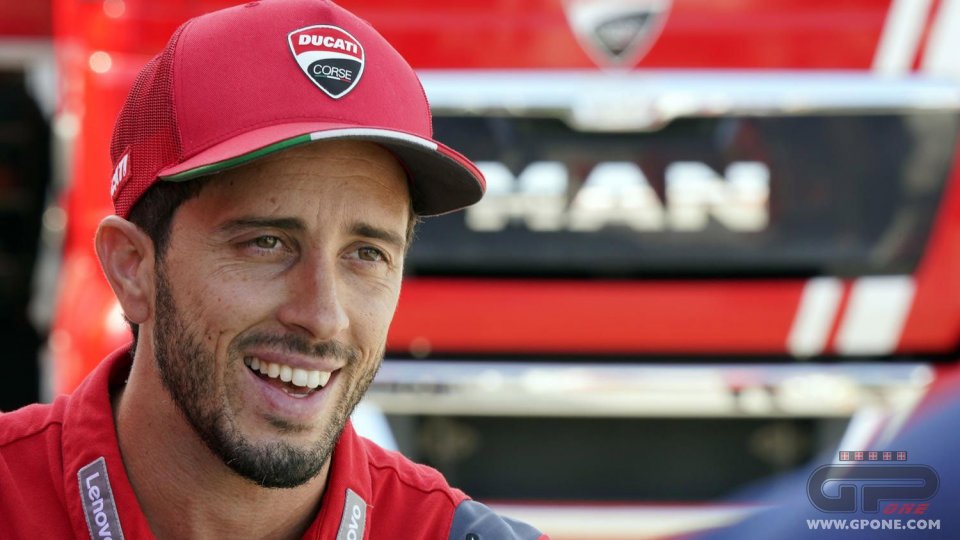 Yesterday Andrea Dovizioso probably did not imagine he would be leading the world championship at the end of the first GP at Misano. It’s a situation that is almost a gift from Fabio Quartararo, who made a mistake and was unable to exploit the full potential of his M1, which on the contrary was amply demonstrated by Morbidelli and Rossi. To add to Dovizioso's weekend, there is also the fact that Pecco Bagnaia conquered the second podium slot, demonstrating that with the same bike it was possible today to fight for the top.

However, Dovizioso is still unable to interpret the 2020 Michelin at its best, a tyre that has shuffled the cards so much that this championship is proving to be decidedly strange. However, on Tuesday Ducati will carry out tests at Misano and these tests could be the time to find the right direction and perhaps come good on the chance to win the world championship that has perhaps never been so within reach for the Dovizioso-Ducati pairing.

"In motorsport we all have to adapt to what we have - said Dovizioso - the fact is that this tyre is creating a really strange championship, it is changing everything and this is a fact. This applies to everyone, but we have to adapt and not it's not easy at all. It's strange to be the points leader, but for me it confirms that everything depends on these tyres. Look at my championship so far, how many times have I been really fast and competitive this season? Very few. I’m first with a six-point advantage, for me that’s confirmation that everything depends on the tyres. "

"When you are slow at doing what you like doing ... you tend to swear. The championship will remain crazy, there are a lot of fast riders, and many of them can win. A lot of riders are now able to get on the podium, a lot have grown compared to the past. Everything will change quickly from track to track; it will be a crazy championship until the end. "

Dovizioso: "The KTMs were slow here, this shows that it all depends on the Michelins"

"Absolutely. On all tracks, things can change radically. Just look at the KTMs, they weren't fast here. This depends on the tyres, in every race you can find yourself being very fast or very slow, it depends on the balance of the tyre on the bike on each track. The characteristics of the tyres are also another story, the way you have to ride to be fast is different than in the past. Before with the Ducati you had to brake hard by sliding the rear, entering tight and opening up early. Now you have more grip at the rear and this leads to fast cornering and a lot of lean and this is a difficult style to keep with this bike. Then when you open the throttle it is difficult because when you are leaning a lot, it is easy to lose the rear of the bike, so it's tough to try to gain speed out of the curves ".

But Bagnaia has perfectly learned how to make the GP20 work with these Michelins. Can’t you learn from him, from his data?

"When there is a rider who achieves a better result than yours, you have the data of what is happening. So you look at them and you can understand what happens. There are some ideas. There are two aspects: the first is that as far as you can copy another rider, you will never be able to do things as well as he does. Second, changing the approach and the way of riding is not easy. I have always questioned myself; I have always studied the data but in the end, you only go really well when you can express your way of riding a motorcycle to the limit. The way you have to ride with these tyres doesn't work in my usual way and so even if I know I have to do certain things, maybe I can't. It needs a change which is not immediate, it is not natural ".

Dovizioso: "Bagnaia says it's not due to the tyres? Everyone has his own ideas"

"I don't want to go into too much detail about what Pecco says, because everyone has their own opinion. I can comment on what concerns me, and maybe I think differently to him. In my opinion, Pecco struggled in 2019, he only did a few races well. It was his first year, he had an approach to braking that was not great for the tyres that we had and he simply couldn't be as competitive in the race. This year in my opinion, he has found a tyre that is more suited to his way of riding. With this I don’t want to justify my results. I am not this type of person and I’m not interested, but it is clear to me that what I am doing is not good enough for the tyres we have. The way I ride and ride fast this year simply doesn't work. Learning and adapting to opening the throttle in a different way is one thing. Getting used to doing different trajectories, using the brake in a different way is another thing and that's what's happening. I have to stay calm though, take advantage of the fact that I’m leading the world championship and above all we have to do a great job in Tuesday's tests. After racing here, we know many aspects of the bike and the tyres on this track and we will have time to calmly test and experiment. "

Did you realize during the Grand Prix that you would find yourself leader of the world championship at the end of the race?

You have always been consistent. Will that be enough to win a championship with a lot of ups and downs?

"The problem I have is with my speed. I've always been a very consistent rider all my career, so in a situation like this with ups and downs for all the bikes it wouldn't bother me if we were fast when we should be. That's the point, the instability of this championship interests me very little. I know I am a consistent rider, but I am not succeeding and this bothers me. It is not so much that there is no Marquez who has dominated in recent years while now many riders are winning. On the contrary, this should be one of my strengths because when many riders win, I'm usually always there. But it's not happening and we need to improve, otherwise it will be difficult to have the chance to fight for this world championship. Having this pace won't be enough until the end of the year to win the championship. It’s something that can help, but it's not enough. "