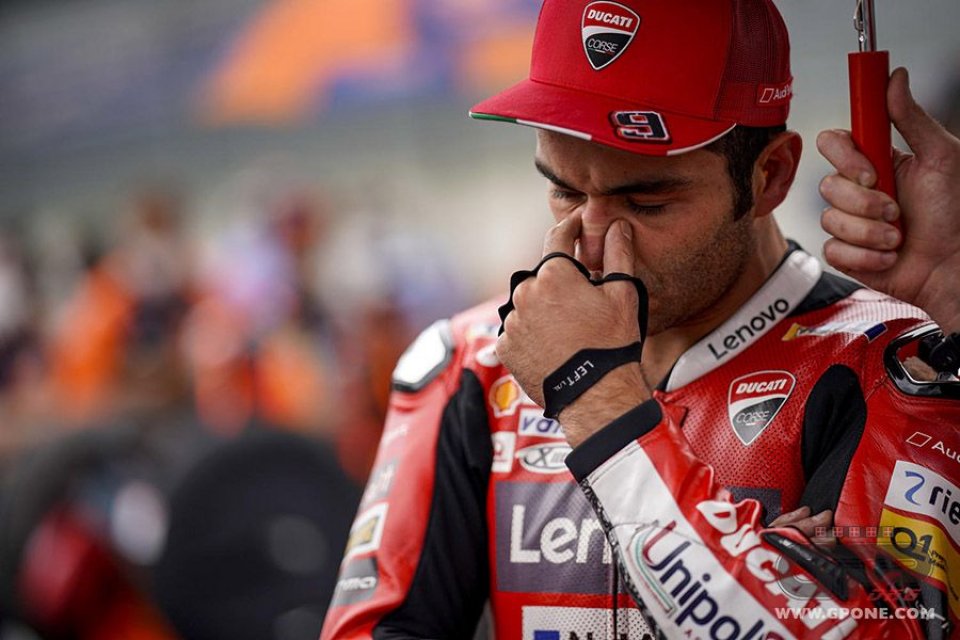 His image appears on the PC screen for the meeting with journalists, which unfortunately remains virtual for the moment, and it is clear that there is something wrong. Danilo Petrucci has a tired, heavy face and we did not expect to find him like this after a two-week stop that was intended to allow the riders and teams to recharge their batteries in view of a gruelling sequence of nine races in eleven weeks. But it’s Danilo himself who clarifies the reason for his mood and after not being able to say too many words of comfort during the interview, at least from GPOne we send him a (also unfortunately virtual for the moment) big hug.

"Unfortunately, my grandfather died this morning. The dark circles are a bit for that reason. It's not a very easy day, I hope to get rid of this soon. I want to get on the bike and have fun, maybe do a good race for him."

Are you still motivated after all that?

"I have a lot of incentives to do well, I'm not satisfied with what I've done so far. The situation is difficult and I have never been in such a position before, perhaps living in a house divided at Ducati has put pressure on me. In these last two weeks I realized that the thing I really miss is having fun on the bike and I want this at Misano, I want to have fun again. The situation must change, I want to do it both for the present and for the future. "

At least the Grand Prix takes place at Misano, which should be a home track for Ducati…

"We know this track very well, but it certainly doesn't change things much. We did some tests here with Michele Pirro, I saw the data and I know there is a completely new asphalt. There should be more traction than in 2019 and my goal is to find good sensations on the bike and have fun, which are two things that I really missed in the first part of this season. I'm pretty positive, I used these two weeks off to try to understand what I was really missing and I think I having succeeded ".

Do you think you have a chance to rectify the situation?

"In the last three races I have had too many difficulties, but at least in the last race in Austria my pace was not bad at all. I realized that I am on the right track to get back to the positions where I should be. I had lost too much confidence and that is the thing that I missed the most. "

How are you getting on this season with the double rounds on the same track?

"Honestly, I don't like to race twice in a row on the same track, but this year it is virtually mandatory and we ought to be happy to be able to race with this format. Now the hardest part of the championship begins, here I haven't been fast for the last two years. I hope that the new asphalt will help me, let's see how it goes tomorrow. I'm certainly not satisfied with what I've done so far, for one reason or another I've never been where I wanted. Here at Misano I absolutely want to go back to where I think I should be".

2020 is proving to be nothing to smile about for you…

"At Jerez everything started badly, from the crash in the test that affected both weekends in Andalusia to the behaviour of the new Michelin tyres on that track. I suffered too much from the type of braking it requires, but I also think that in Austria I may have found something that I had been missing for a long time on the bike, that is to have fun. The first goal for this weekend is to have fun on the bike as I have not done for a long time. "

After the first race in Misano you will do a test. Could that be a turning point?

"It will be an important test; I don't know if there will be anything new to try or we'll just do a test to work on the set-up of the bike. We need to see how this weekend goes, there will be a lot of work on braking in my opinion but it's difficult to talk about it now. We have to study first the new asphalt and understand how the bike reacts, because usually a new asphalt has a big influence ".

Today Martin and another member of the Ajo Team were confirmed positive for Covid-19. A complex situation for you riders...

"You have to be careful, it's an unusual year. We can’t do the things we did before, neither on nor off the track. We’re missing the public a lot and I'm happy that there will be some people here. In the paddock it's easier to live because there are only people who work. We are calm, but the affection of the fans is lacking. I'm sorry for Martin, I hope he is well but it is an important indication that we must be very careful. He is fighting for the Moto2 world championship. Obviously, I hope that he’s OK and will come back soon, but it's a big blow for his championship hopes. "