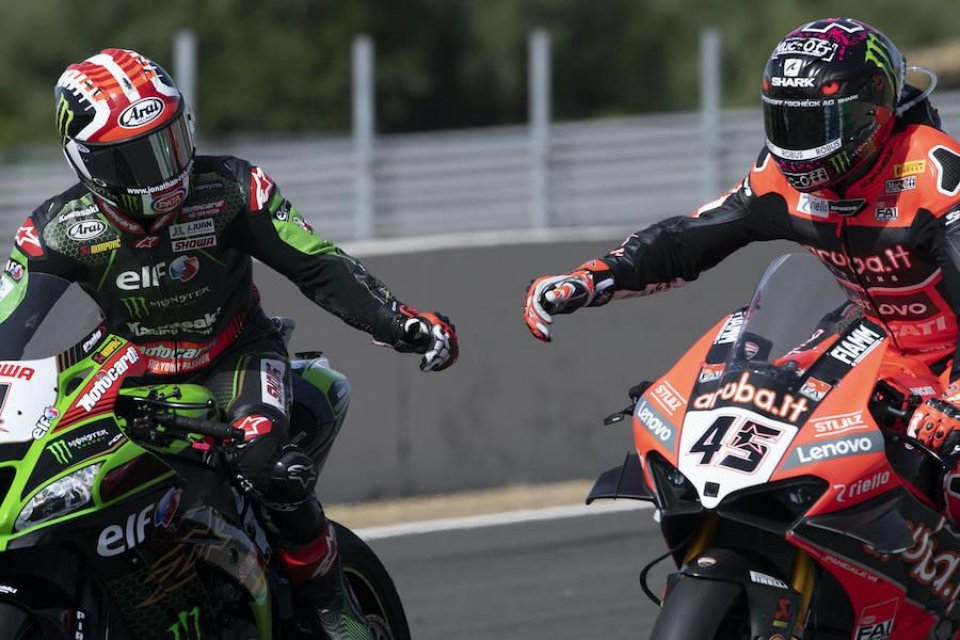 The first Superbike round at the MotorLand Aragon circuit was a really intense weekend, full of food for thought and twists and turns. In the end, in the chaos of the three races and the Superpole, the winner was undoubtedly Jonathan Rea who, despite having lost Race 1 on Saturday, surrendering to the Ducati duo, came out of the Spanish weekend with a ten-point lead in the world standings over Scott Redding. A success for the five-time world champion as we know that Aragon is supposed to be a favourable track for Borgo Panigale's V4R due to the long straight before the last two corners.

THE GOOD: It would be too easy to award Jonathan Rea the prize of "The Good" this weekend, so let's try to complicate our lives and go for Chaz Davies, who finished second in Race 1 and Race 2 and above all fifth at the finish of the Superpole Race, a success for a man who doesn't like sprint races. The Ducati rider was the best over race pace but having to always recover from further down due to a poor qualifying performance that penalized him, and it's a shame because he would have had the potential to win both on Saturday, against his teammate, than on Sunday. The Briton is still undecided as to his future, Ducati is reported to have sent him a renewal offer for a single season for 200,000 euros, a big step backwards for a rider who two years ago had signed a two-year deal of (approximately) a million and a half. From what we were able to see from Chaz's looks and behaviour, however, the problem may not be exclusively economic, the 2011 SSP world champion is an intelligent rider and he knows that the manufacturers can afford less than before. it's about whether or not he's Scott Redding's shadow on the team. At Aragon he proved he can have his say and that he has the speed to compete with both Scott and Rea. 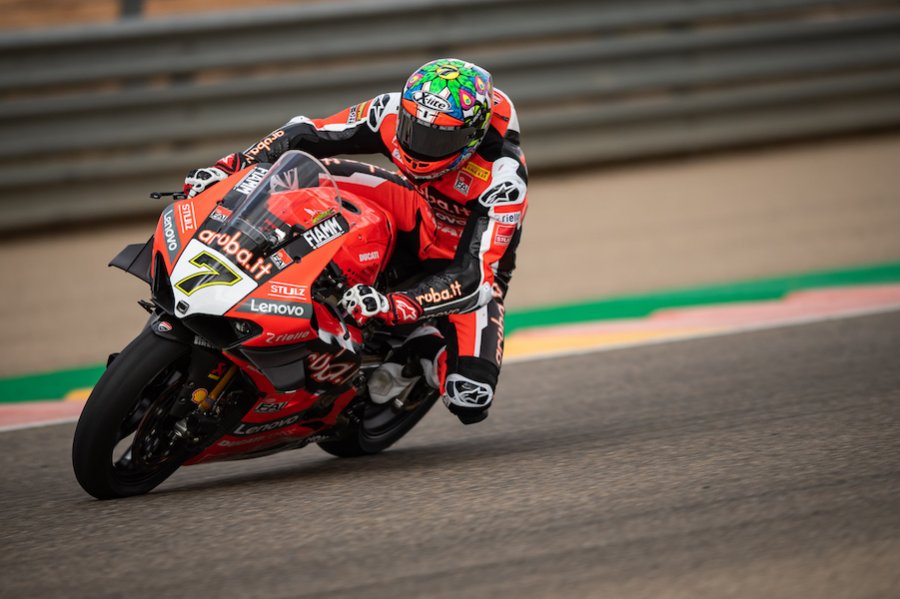 THE BAD: Tom Sykes was one of the protagonists of the weekend as early as Wednesday when the formalization of his stay in BMW also for 2021 eliminated Laverty from the team with only 3 races behind him. Anyway, the Brit told us that he believes a lot in this project and that the Aragon weekend could have been the right one… well it wasn't. From the breakage and oil leak in Race 1 to his colourless performance in Race 2, as well as the accident that knocked Mercado out of the Superpole Race. More is expected of BMW, but Sykes is making his own contribution.

THE UGLY: We told you about it in this article and seeing a team leave the paddock is never good news. Genesio Bevilacqua and Althea, therefore, will no longer be alongside Midori Moriwaki in the SBK world championship. Gabellini returns home as well as his Honda and the entire service and hospitality service. Whether the motivations are design, sporting or economic, it doesn't matter, the images of the mechanics clearing away the garage while all the others remain left us with a bitter taste in our mouth

THE DISAPPOINTMENT: Andrea Locatelli is certainly one of the "Good" guys of this SBK weekend, the Bardahl Evan Bros rider making it 7 out of 7 "and counting" as English speakers say. ‘Loka’ is certainly a "superior" rider to the category in which he finds himself, he has the best bike in his hands, prepared by the most complete team in the Supersport paddock, but the opponents leave a lot to be desired. Cluzel and Mahias seem totally helpless in the face of the Locatelli-Evangelista partnership, will they be able to grab a few points from him before the end of the season?

THE CONFIRMATION: Rinaldi is strong with the V4R, and he is the confirmation of this SBK weekend. Something is still missing for the podium: “I don't have the 2020 bike”. Maybe next year he’ll get his hands on a 2021 bike? We'll see, the rumours are abounding...

THE MISTAKE: Jonathan Rea dominated on Sunday but he could have done the same on Saturday too if he hadn't made a mistake in Turn 12 while battling against Scott Redding. Too bad, the five-time world champion could have ended the weekend with top marks, so he had to settle for a 9 and a half.

THE SURPRISE: On Saturday during BAR SPORT live on the social channels of GPOne.com, Carlo “the Divine” Pernat had invoked the name of Honda HRC. Perhaps somewhere in Tokyo someone must have been listening to us even with the time difference. The CBR 1000 RR-R Fireblade took a podium in the fourth round of the weekend with Alvaro Bautista who confessed to us: “with more work this bike can win the world championship”. Bautista's third place therefore takes Honda back to the podium after 4 years of fasting, the last time it was Van der Mark at Magny-Cours in Race 1. 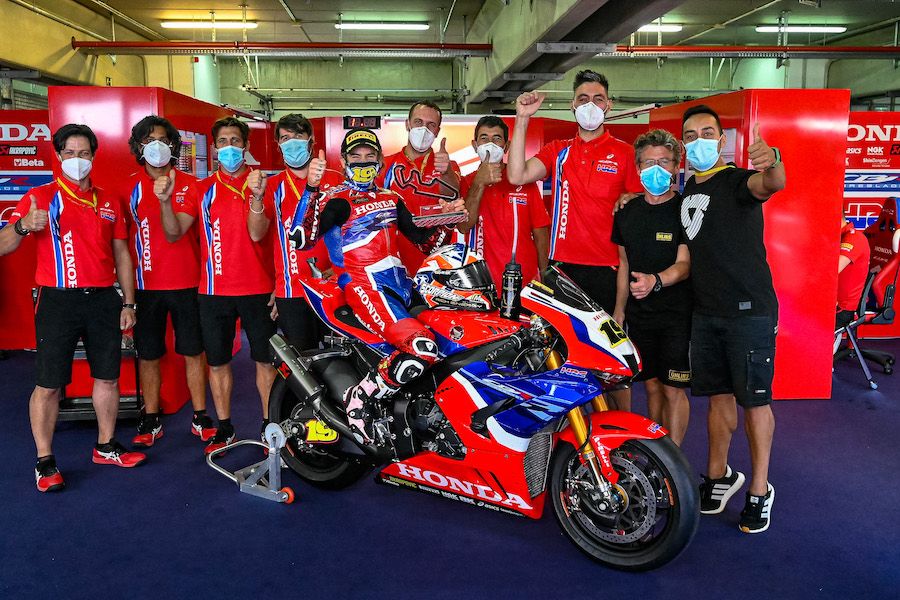 THE PASS: Rea made a mistake in downshifting, thought he was going to crash and lost first place in a race 2 dominated from start to finish in favour of Chaz Davies. But the Welshman’s dream on the Panigale V4R did not last long. The response from the Northern Irishman was that of a world champion and his pace in the next two laps made it clear why Rea is still the undisputed leader of Superbike.

THE CURIOSITY: In this first SBK weekend at the MotorLand circuit in Aragon the track record in the race was broken in all categories: in SP300 with Ana Carrasco, in SSP600, needless to say, with Andrea Locatelli and in the senior class with Jonathan Rea who also improved the track's all-time record in Saturday's Superpole. Great job by Pirelli, which is also developing new constructions for next season, having them tested even on race weekends.