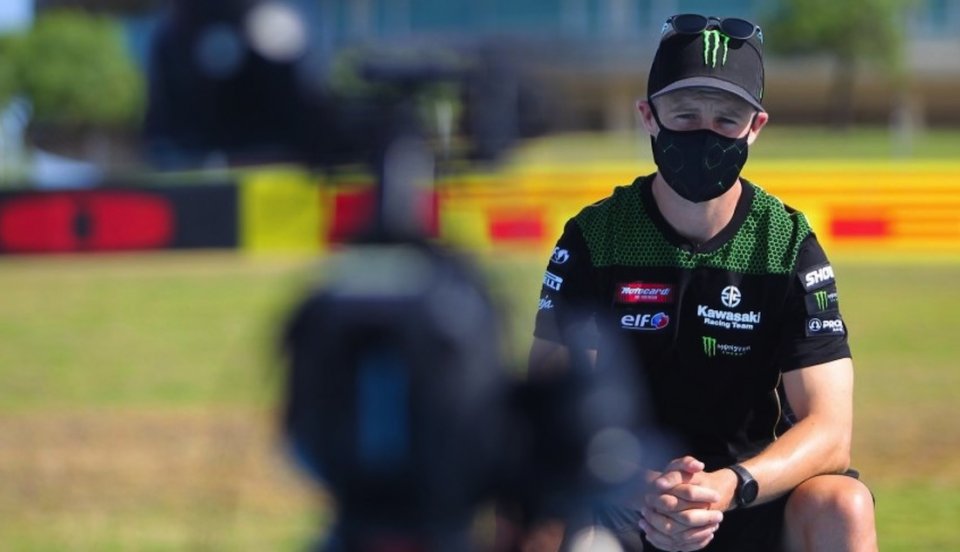 The SBK world championship has changed top rider again. After Phillip Island, Alex Lowes was first in Jerez; at the end of the first post-Covid weekend, the winner as best in the class was Scott Redding while, in Portimao, after a practically perfect weekend, the leading role player ascended on the throne. We’re obviously speak of Jonathan Rea, five-time world champion and now also leader in this championship with a four-point advantage over Redding’s Ducati.

One wonders how he feels now, while he’s relaxing these days, after the exertion in Jerez and Portugal.

"I’m really good. I was able to recover and relax because Jerez and Portimao were two very demanding races, and then we immediately tested here in Aragon, so I was away from home and away from my family for a long time. This season was strange because we race every other week and, on top of that, after the longest period we’ve ever been without bikes, so we have to continue to train and it’s what I did after disconnecting for a couple of days. It was great to be able to do homework with the kids and spend time with my wife.

You mentioned your family. During the lockdown, and in the last few weeks, we’ve seen a different Johnny Rea on social networks. We’re all used to seeing you during the race weekend, always very focused and determined to achieve your goals. How important is it for you to spend time with your family and share some of it with your fans?

The great thing is I can choose what to share and what not. I want to share my real life because people normally see me on the track where everything is all very intense and where everything is focused on winning but, off the track, I’m a normal person, and I like to show this part of me too. I also really like my life outside of racing but, from social media, it all seems incredible when, instead, there are also difficult times. During the lockdown, as it was for the rest of the world, it was hard for me too, especially mentally, because I had no goals to achieve. So I tried to find something to do with my wife and children every day, and it was nice to be all together.

How’s traveling during this period? We know that you all are swab tested before and after the weekend, but traveling from your country and coming to Spain, where the situation is not the rosiest, must still be complicated.

"lt’s definitely not easy, even only because of the logistical reasons, since flights are limited. I don’t fly private flights, and many companies are canceling flights. I’m very proud of my team because we have a very strict in-house protocol, and all those who enter the garge have a swab with a negative result that was taken no more than 48 hours before their arrival on the circuit."

Rea: “These will be two crucial races for the championship”

We’re now in Aragon, where you’ve won three times. Last year, you got three second places behind Alvaro Bautista, suffering a lot in the straights. Do the victories in Portimao, where there are some important straights, give you more certainty, in view of this weekend? You also did some tests here two weeks ago.

"We lost a lot in the first sector in Portimao and here we'll lose in the fourth, as is clearly seen in the tests. Power is the area in which we suffer most. We're pushing for more, but our bike is very balanced ,and I think it's one of the best on every track and in every condition. We suffer on the straight against Ducati and Honda,  but we're at Yamaha's level, more or less, and we can balance with braking and consistency even with the heat. Everyone says that this is a Ducati track, but I think the weekend will be more open compared to that of 2019."

As we said before, you have four points ov erScott Redding in the standings. Can these two weekends be crucial for awarding the championship?

"They'll be definitely crucial  to see how  the season will go. Doing two races on the same track is new for SBK, and it depends a lot on the results. If we had had two weekends  in Portimao, it would have been perfect for me, but we'll see how the rankings on Sunday after the second race will be. My goal is to win. Anything can happen in six races and, after this one-two, there will still be nime races left, which will take place on circuits where we are strong, but it's important to leave here with the maximum possible points."

Rea: "That was a scary accident between Zarco and Morbidelli, but motorsports are dangerous"

In these two weeks, the engines have not stopped, and we've seen two MotoGP races at the Red Bull Ring where there has been lots of controversy regarding safety. What do you think about that?

"I saw the accident in the first race, and it was really scary. This type of accident can happen on every track,  and even if we're trying to make the races as safe as possible, motorsporta are still dangerous. It's written on the back of each pass. Turn 3 of that track is  a typical curve that can give problems because the bike can completely cross the track. We have a similar curve at Magny Cours but with less speed compared to the Red Bull Ring and, in wet conditions, it would have been even more dangerous because it's easy to lock the front and fall. The track is great but, at that point, it should be slowed down for motorcycles."