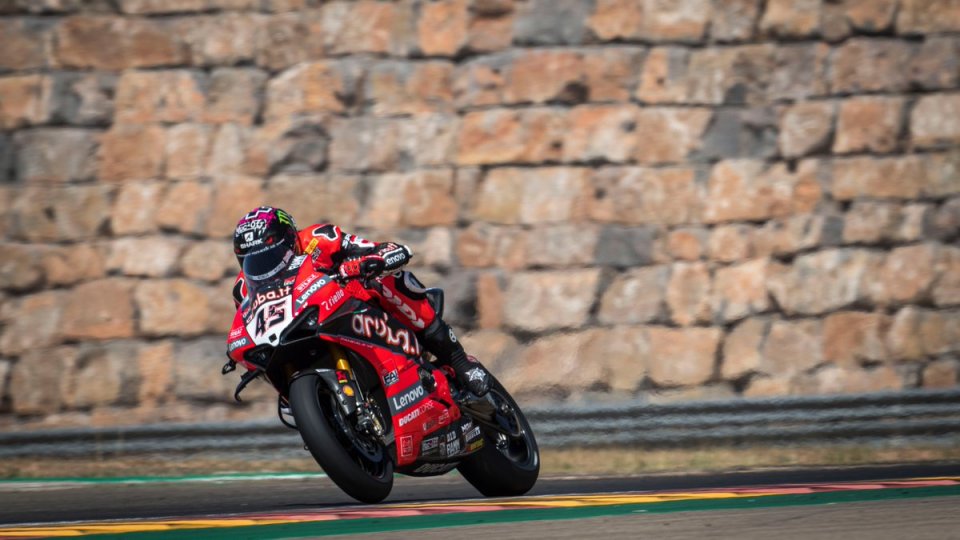 A victory worth highlighting. And if Ducati and Scott Redding remember this day at the end of the season, it will only be for one reason: The World Championship. In fact, today's 25 points, combined with Jonathan Rea's third place, allowed Redding to return to the top of the standings and move to +5 on the reigning world champion. Now that there are five races left to run at MotorLand plus another nine on other circuits, it goes without a shadow of doubt to say that this and the next weekend are crucial for the championship.

"I believe I can maintain this pace for the next five races here - Scott told us after the podium ceremony - so I hope that when we see the data we will understand where we gain and where we lose in order to face tomorrow and next weekend in the best possible way. The most important thing, however, is the confidence I have now: before the race I didn’t think I could win, I hoped I could try, during the race, however, I knew I could win. Now I have the right confidence to win, I believe in myself and in my bike and this is the most important thing I have gained today ”.

When did you realize you were going to have a chance to win the race?

“On the sighting lap the tyres were sliding a lot and I thought that it was over for me. Then when I was alone on the grid, I thought I could do it; I could fight for the win and I did it. I put my head down and rode well, according to my pace and when I found myself behind Rea and he slowed a bit I said to myself “go, this is your moment”.

After passing him there was a moment when it seemed that you could even break away, then Johnny made a mistake and you had to fight off Chaz.

"Honestly, I didn't think I could create a gap from him because in the last few rounds with the wind I hadn't been able to get away and then I was trying things that slowed me down a bit. The tyre was almost finished, especially on the front and I didn't think it would be easy to finish the race in front of everyone. Winning today is important and it gives me a lot of confidence for the next races also because the team is doing a really fantastic job ”.

Scott, you finished FP3 in 11th position this morning and yesterday was not entirely convincing. Were you hiding your cards?

“No, both yesterday and this morning things didn't go well. I was risking a lot on the bike and I really didn't understand what was wrong. I was pushing but the time wasn’t coming. It was as if the bike were different and this happens when there are a lot of races close together, however we were calm in the garage and in qualifying it was already better. Maybe the qualifying tyres helped me to regain some confidence and I thought that if the bike had worked at those speeds it could also have worked just as well, in the race. I felt good and I got on the first row and then I won ”.

The problems persist in free practice, but Jonathan seems to be good in all conditions, does that worry you?

“Kawasaki has been strong all weekend and we need to understand why we are losing so much in practice. In the end, however, the race is what counts because in practice you don’t win anything, but it is still important to prepare for the race ”.

What are your feelings for tomorrow's Superpole Race?

“I had a good feeling with the SCX and this could be a nice change for us. Rea is usually very strong in the Superpole Race but every time I go on the track for that race, I learn something. It is new for me to have a race with so few laps and I am learning to approach it better. It will be important to get a good start and then it will only be 10 laps ”.