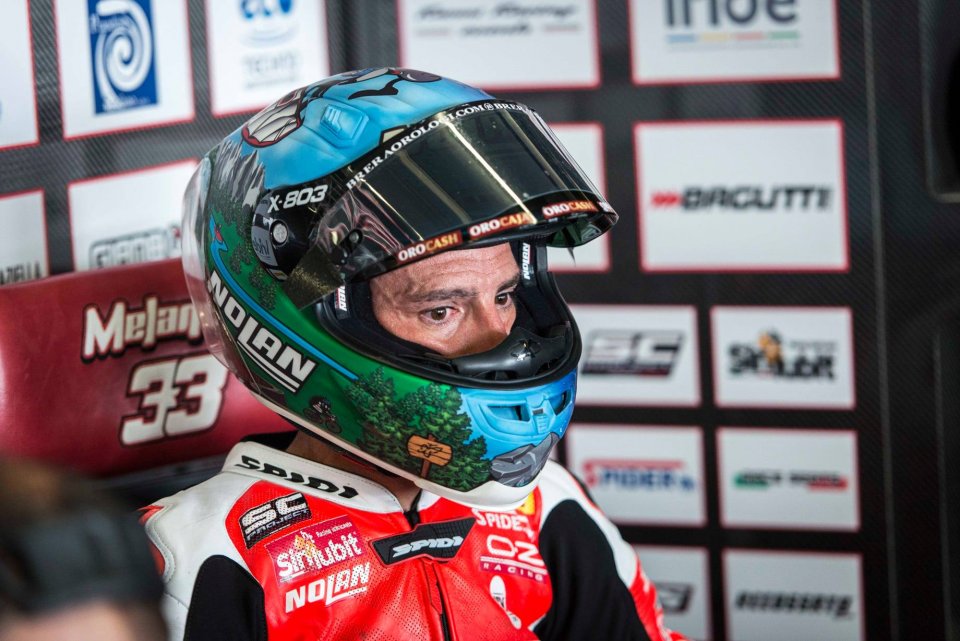 Superbike is back on track and does so in Aragon with a historic double-header event at MotorLand. The most interesting battle will certainly be the between Jonathan Rea (Kawasaki) and Scott Redding (Ducati), who are divided by only 4 points, in favour of the world champion, in the standings. Behind them, literally anything could happen and one of the special observers will be Marco Melandri on the V4R prepared by the Barni team. Marco in Portimao did not do well after his good debut in Jerez and now he is talking about a revolutionized bike to try to reverse the trend.

“I expect a completely different weekend compared to Portimao where things did not go very well - Marco told us - It was anticipated that we would encounter some difficulties in the first two races because getting into the fray without having done any tests is really difficult. In the early races I worked a lot on the position in the saddle and on the geometry of the bike, but doing everything together makes it difficult to see what is good and what is not, but I was so far behind that I didn't have time to take one step at a time. After Portimao we analysed the data and, starting from scratch, with predefined points, we changed to solve the main problems ”.

In these weeks off, however, you have not abandoned the sound of engines as you returned to the commentary booth at DAZN for MotoGP. How is this experience going?

“DAZN is a good group, made up of young guys and motorcycle enthusiasts. We are giving a different cut than what the public was used to and a lot of people are enjoying it. As a technical voice, I try to make an impression on a human level because I can't know what they are doing in the garage, I can imagine it, but I don't know 100%. I want to convey to the people at home what the rider thinks and what he is about to do, many have told me that I have made them understand many things they had never noticed and this makes me very happy ”.

Melandri: "The collision between Zarco and Morbidelli was a racing incident"

The big controversy in MotoGP was the question of safety. With the accidents of Bastianini and Zarco-Morbidelli in the first weekend and the various penalties in the second race. What do you think about that?

“In my opinion, MotoGP has gotten out of control in these two weeks. Before the races I had said that Turn 1 and Turn 3 would be a problem in rainy conditions, but they were also a problem in dry conditions. Zarco and Morbidelli's was a racing incident because at that point on the track the lines cross, it's easy not to see each other and I challenge anyone not to try to overtake using engine power on that straight. It is simply not possible that in a championship like MotoGP, the race is decided by someone sitting in an armchair with air conditioning who has never ridden a motorcycle. Human error happens, you have to find a way to ensure that there is no room for mistakes. It would be enough to put grass, as it always has been. Now the riders take the white line between the curb and the green asphalt as a reference, with grass they would base themselves on the line between the track and the curb, you don't risk more, you just have to be more careful ".

Another thorny and debated issue was the separation between Andrea Dovizioso and Ducati. In your opinion, was that a marriage that could have gone on or in any case ended in a better way?

"There had been a crisis for a long time, it was an economic tug of war. Dovi deserved a salary adequate to his worth, on Friday he understood that he could win and went all out for it. If he had scored a double win, they would have reached a point where Ducati would not have been able to try any sort of rapprochement, while now there is some gap and it is hard for Dovi to find another ride. Aprilia and KTM do not have the money that Andrea asks for and should he go to these teams it would be for less money than what he would have got in Ducati”.

Do you see the championship title a two-way battle between him and Quartararo?

"I wouldn't be so sure because anything can happen this year. Quartararo has had three very negative races and Misano will be the litmus test for him. I wouldn't even rule out KTM because the championship is short but there are still a lot of races left and if Dovizioso is still up and down they could get back into the race. "