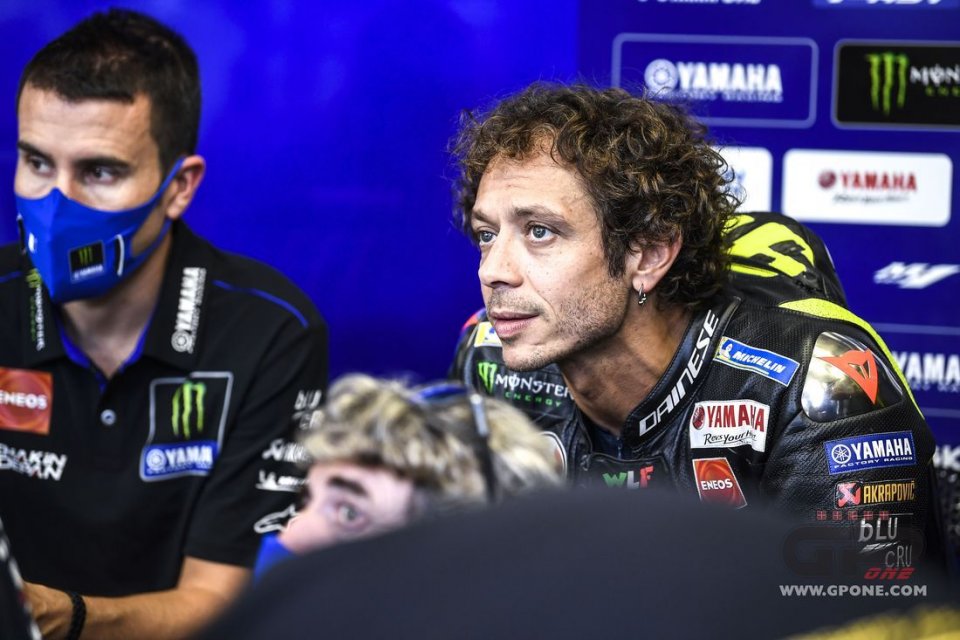 Valentino Rossi was the first Yamaha rider to cross the finish line in the Styrian Grand Prix… but the problem is that he finished in 9th position. A bit of a disaster, it could be said, because the M1 was the last one of the manufacturers fighting for the championship. The Red Bull Ring was not the track of choice for the Yamaha, but it was hard to expect such a devastating failure.

“We knew that on this track we would have to suffer, because the top speed is important here and the difference with the other bikes is now enormous, difficult to manage - explains the Doctor - I pushed hard to improve this point, but also this year the situation is similar to last. On this circuit there are long straights and we suffer ”.

“From 5th to 9th in a week? Today nobody crashed "

But last Sunday it went much better.

"I finished 5th because there were so many crashes, but for today everyone had sorted out their problems, they were able to put the horsepower down on the ground and made no mistakes. I was the first Yamaha rider, but in 9th position. The problems are more or less the same as last season, but we did well in Jerez, we had a hat-trick. I think that on the next tracks we can be more competitive, also because going on like this is difficult ”.

The Suzuki shares the same engine architecture as you, but it was faster…

“They have worked a lot and well, they were impressive. It means that the problem of maximum speed is not related to having the 4 cylinder in line. They certainly have more traction, but today I was behind Rins and clearly their engine is faster than ours ”.

Vinales had brake problems and risked big. Did you have any signs?

“I had some problems last weekend but I worked hard with Brembo to solve them and they disappeared. This is a very severe track for the braking systems and everyone suffers, in fact all the bikes have air intakes to cool them. The Yamaha suffers even more, because we have to force the braking to recover what we lose on the straight and the stress on the systems is very great ”.

"The medium tyre didn't work; a small difference is enough to change the result of a race"

Dovizioso complained about the quality of the tyres…

“The situation has improved lately, Michelin is more careful, for example they don't give us tyres that are heated several times anymore. However, in MotoGP the level is very high and a small difference, like one tyre better than another, is enough to change the result of the race. Today I was happy with the track conditions, it was 33 degrees on the asphalt, perfect for a motorcycle race. I thought I was more competitive, but the medium tyre didn't work, it had no grip and I found myself in trouble. The range of use is very small ".

This remains a difficult championship to interpret, what’s your idea about that?

“I think that now the bikes that were second tier, like the Suzuki and especially KTM, have improved a lot, there are four brands that can fight for the victory, so the cards are mixed. The riders are all strong and that makes things interesting, plus you can only be fast if you work well with the tyres. Sometimes it's all easy, then the next week you're slow. This is the biggest problem, but no one knows why ”.

Quartararo was reckoned to be the favourite, now he seems to be lost. Is he suffering from the pressure?

“Who will win this championship? (laughs) All the riders thought to be favourites have come up short. I don't know if Fabio feels the pressure, in my opinion he is suffering from the technical problems of our bike. At Jerez he was always strong, the M1 worked well and in fact he won. In my opinion it is a technical question ”.

You are 25 points behind him in the standings, are you thinking about the championship?

“We are all close, I'm not far from him. I hope that the Yamaha will do better on the next tracks ”.

"The Stewards are under pressure, but we have to raise the bar"

Now let's talk about the Stewards, there was controversy because they did not penalize Pol Espargarò for going onto the green at the last corner…

“We talked a lot about this in the Safety Commission and the situation seems out of control to me. In my opinion you should never go on the green painted part, instead it is allowed to do it 3 or 4 times and everyone makes the most of this rule. For me, every time that happens, you should be forced to drop back one position or get a time penalty. With that part painted green the tracks are safer, but one should think that there would be gravel in that point or the grass. I know the Stewards are under pressure after Zarco's accident, but they need to be more uniform in their judgment. Their work is not easy, but we need to raise the level ”.

In Moto2 Martin was penalized for that…

“Ducati interested in Marini? I advise Luca to focus on this championship "

In Moto2, Bezzecchi won and Vietti in Moto3. From that point of view, it was a good day for you…

“I am so happy; it is our team's first double. When Celestino was on the podium and the Italian anthem began to play, I saw that he was moved and I shed a tear as well. It was a great satisfaction with Bez too, but I was already too focused on my race to cry (laughs). It was a great team effort; Luca is still leading the championship and can fight for it ”.

Speaking of your brother, Ducati has made no secret of an interest in him…

“We are honoured, but I advise Luca to focus on this season, because it is the most important thing. He has the chance to win the title and many riders have never had it. "