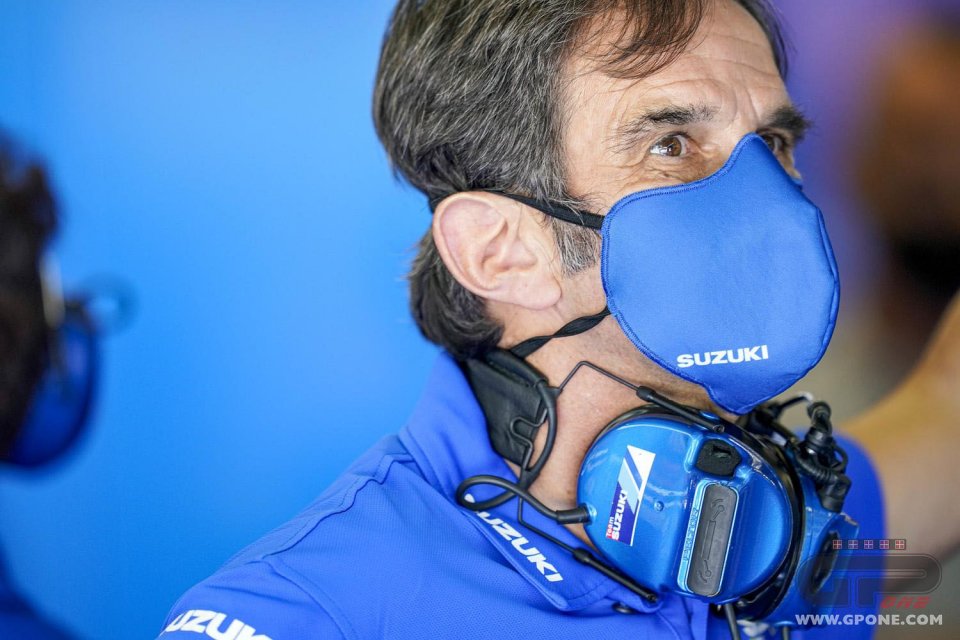 Davide Brivio is a very nervous man at the end of the Styrian Grand Prix when commenting on the outcome of the race to the microphones of Sky Sport MotoGP. After seeing his protégé Joan Mir dominate the first part of the race, Brivio first had to accept the red flag and then had to digest a missed penalty for Pol Espargarò that would have at least allowed Mir to get on the podium for the second time in a row.

In the last corner, the KTM rider went over the track limit with both tyres of his RC16 and according to the regulations he should have been relegated one position to the advantage of Mir, which did not happen.

"I can't understand what the race direction is up to - declared Brivio – they have already been in the eye of the storm for a few days. There is a regulation that is very clear, which says that if a rider exits in the last lap off the track he is penalized, one position is taken away. It happened in Moto3, it happened in Moto2. Who knows why today, just today that we are in Austria at Red Bull's home, there is a KTM that has gone over the limit and… I don't know, I'm in a bit of difficulty in reaching a conclusion. Unjustly we didn't get on the podium, because if there are rules, they have to be applied. "

Did you go to point out the situation in the Race Direction?

"Due to this Covid situation it is not possible to go to the Race Direction in person, you can only communicate via email and obviously I have reported the matter. I am waiting for an answer from them, but just see what happened between Martin and Bezzecchi, or Vietti last week. Things like this happen and several things have happened and usually the decision is made immediately. This delay worries me here and makes me wonder. I would like to understand why the rule is applied sometimes and sometimes it isn’t " .

Do you think they will find a valid answer to your protests, a correct justification?

"They will certainly find an excuse not to penalize Pol Espargarò, but the rule is clear. Anyone who goes outside the limit of the track with both wheels is penalized. Mir was penalized at the first start because he went wide at turn 1 and had to give up a position. He did it, it's a rule and we applied it. I don't like this track limit rule, but it exists. This is why I speak of objectivity or subjectivity, if there is a rule everyone must respect it, period. I would look for a different solution, but for now there is no such rule ".

Maybe Pol Espargarò didn't have room to stay inside the track because Miller was there. Is this an acceptable interpretation?

"It has happened a few times, certainly they will hide behind the interpretation of the rules and we cannot carry on with interpretations. The problem is that when the rule is interpretable, we will never stop arguing. If we talk about a rule, it is a rule".

Will you make an official complaint?

"We have not yet made a complaint, for now we have only made a report to the Race Direction. In addition to the injury, the insult. We were leading a race that perhaps we would have won. Then the red flag arrived, and that's fine. But then also the insult, no. We don't want to accept that ".