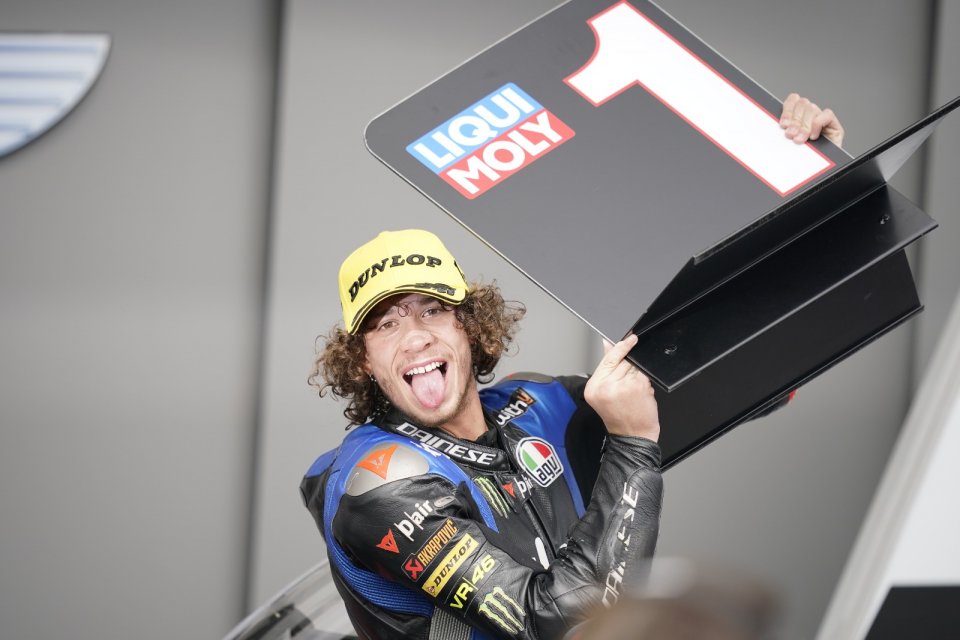 Usually, to win a race, you have to pass under the chequered flag first. For Marco Bezzecchi it was different, because the rider from Romagna found out that he had won at the Red Bull Ring only when he reached parc fermé.

At that moment, his team informed him of the penalty inflicted on Jorge Martin, which handed the rider of the Sky Racing Team VR46 his first success in Moto2. A day to remember therefore for the Italian team, which scored a double with the paring of Vietti-Bezzecchi.

“What can I say, I am very happy - began Bezzecchi - when I arrived at parc fermé and they informed me of the penalty inflicted on Jorge I was surprised. I was already happy to have obtained second place, but it was all unexpected. Obviously, I've always dreamed of winning in Moto2 and in the end I managed to make one of my dreams come true. Maybe it wasn't like passing under the chequered flag first, but a victory is always special "

In the race, the Romagna rider emerged over the long distance, revealing himself in some ways a ‘diesel’...

“It was a great challenge with Martin. I tried to stay calm at the start of the race, aware that I had a good pace. Then I got closer and closer to him, but I was getting fed up with staying behind him without being able to attack. From the garage they put the board out for me, but I didn't want to look at it. I tried to find an opening, but there was no space. I also tried to follow his line and take his slipstream, but I struggled in braking. In the end, however, everything went well all the same ".

What happened behind the scenes once the race was over…?

“I hugged Jorge and told him: “It was like in the old days”, recalling the Moto3 races, where we duelled so many times for the win!

There will now be a big party at Sky, thanks also to the success of Celestino Vietti…

"I told him on Friday he was ready to win. I had seen the fire inside him and all this fired me up as well. As I said, I'm happy, because I dreamed of this result and I thank the whole team. For me, the last few months have not been easy, especially after the crash with the dirt bike. Unfortunately, the lockdown slowed my recovery, also because I was having more trouble walking than getting on the bike. That story is now a thing of the past and I can't wait to race at Misano. Two races await us on the same track and we will have to be ready ”.

Rossi: “I wasn’t challenging myself by staying on the track with the slicks”