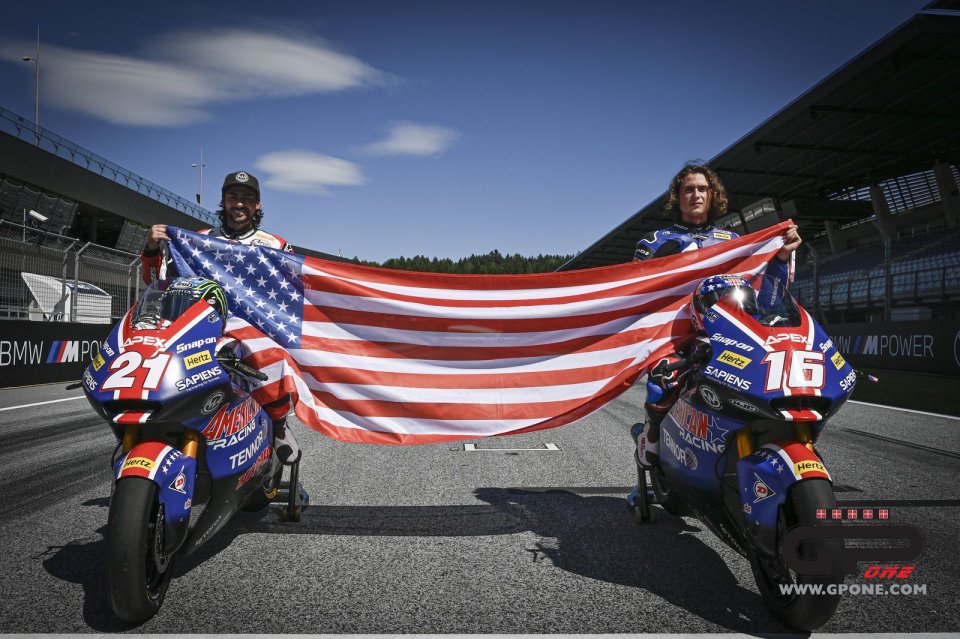 It’s 20 years since John Hopkins crossed the pond to come and race in Europe, and 20 years since he first rode the Red Bull Yamaha that he would later go on to compete with in the 2002 MotoGP season. Now, 'Hopper' is the Rider Coach and a mentor to Tennor American Racing, and the team celebrated the milestone in Styria.

Tennor American Racing's Joe Roberts, who took his first podium at Brno not so long ago, joined Hopper for two laps of the Red Bull Ring on Moto2 machinery on Thursday - ending in a classic stand up wheelie for both. The two also had a photo opportunity with the very Red Bull Yamaha Hopkins rode in 2002, which is on display at the track!

"It was 20 years ago I first rode the bike, the MotoGP bike, as a 16 year old kid on the Red Bull Yamaha!  - said Hopkins - I've got a lot of experience, in this paddock and other Championships for the last 20+ years so I'm just trying to pass on all my knowledge and experience to a young talented American I know can be a World Champion one day. Being able to pass on that knowledge is extremely rewarding, seeing Joe going out and getting on the podium in Brno and having the success he's having this year is almost more rewarding than I ever had in any of my racing career. It's good to pass that on!"

"It's like John said, for me it's incredible to have him on board, he's been a huge hero of mine ever since I was a kid - said Roberts -  I remember he came out to a go kart track to watch one of the mini Championships I grew up riding, and he grew up riding! He's always been a person I looked up to, and seeing that Red Bull Yamaha brought back a lot of memories for me as well! It was inspiring to see what he did back then. I watched the movie Faster and they showed that whole process for him. It's something I wanted to do! To have him here, he's so vital and I'm excited for our future relationship and what we'll bring to the sport."

Lowes: "I controlled my emotions a lot better, I must be fighting for the...