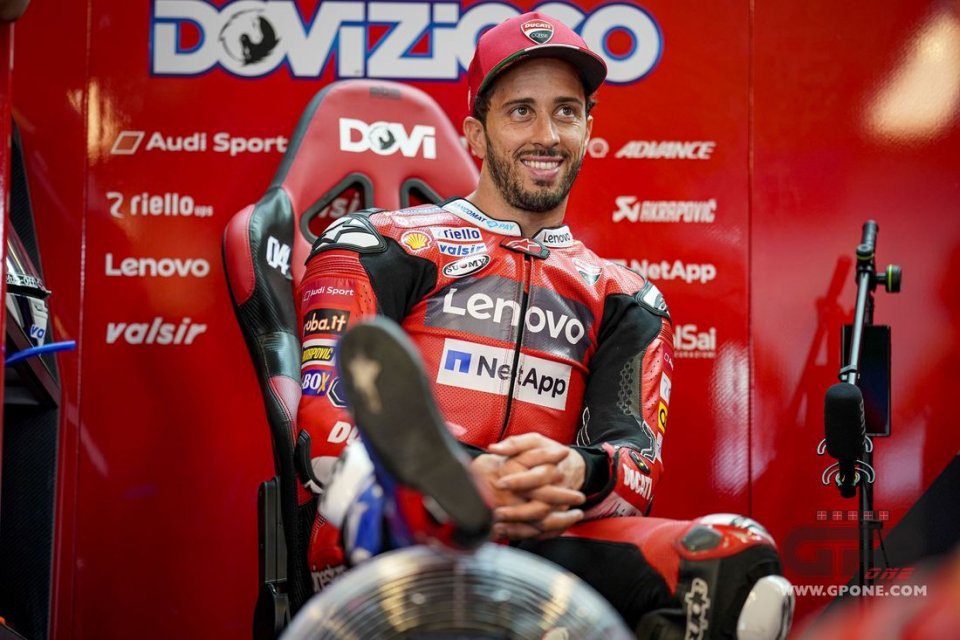 The first impression speaking with Dovizioso after his decision to leave Ducati at the end of the year is that he has taken a weight off his shoulders. He seems relaxed, almost content, as if he had taken a step he had been meditating for some time and now the tension is gone.

“I know that you will ask me a lot of questions about my decision, but it's not the time to go into too much detail - Andrea said - I can only say that the best thing for me was to decide today so that I can focus only on the races. I don't want to go into details now, there will be time to do that, because I don't want to create tension in the garage, that's not what we need ”.

How did you feel when you communicated your choice?

“It was a mix of different sensations; I think it's normal. We were lucky enough to experience memorable and fantastic moments, you have to look at the whole story, even if you often quickly forget what has been done. There were a lot of arguments, but also a lot of joy and satisfaction. I met so many wonderful people, there were so many positive aspects ”.

Are you already thinking about the future?

“This is not a retirement; I want to race. But certain decisions are made based on the situation in front of you ”.

To continue you need a motorcycle ...

"There is this little problem (laughs) But this was the best decision for me, regardless of the options I may have. I don't have a plan B, I know that right now there is nowhere to go, but things in our sport can change quickly. "

Are you considering taking a year off or continuing in another role, such as test rider?

“At the moment I have no idea. As I said, my decision is not connected to my future, it is simply the right one for me. When you find yourself in certain situations, it makes no sense to continue in that way, it was right for me to make this choice because there is still a season to complete and the championship is open. I don't know what will happen but I'm not worried ”.

Haven't you ever thought about quitting?

“I have the same desire to race as in the last few years and if an interesting proposal comes up, I will evaluate it. After the excellent results of the last few years I know what I want and can do, and luckily, I don't have to find a job at all costs for next year. I am relaxed because I know what I want, otherwise I would have accepted a proposal that was not very good from Ducati, but that was not my intention. I'm not interested in racing just for racing’s sake, I want to find myself in a certain situation. I don't have to ride a motorcycle at all costs, I have many other passions and things I would like to do. I know what I can do in MotoGP and what I want ”.

Let's say you win the title, could you go back on your steps with Ducati?

“If I managed to win it would be great, but I wouldn't take a step back anyway. This I can exclude ”.

Will this early farewell affect this season?

"There will be no problem, I will only be able to focus on the races and not on relations with the engineers and bosses".

Have you talked to Dall’Igna?

“Of course, we work as professionals. We are not disrespectful to each other; we work to get the best possible result ".

But yesterday you said he would decide your future…

"Maybe I didn’t make myself clear, I meant that Gigi decides the future of Ducati, I decide mine".

Has Domenicali called you?

“No, but on the race weekend I am out of this world. There will be time for that ”.

When did you decide to leave?

"In these things there isn't a precise moment, it's like when you leave a girl (laughs). A lot of things have happened in 8 years, some positive and some negative, then the moment comes when you decide. You know that I almost never make gut decisions”.

Did the long pause affect you?

"Logically staying at home for months, without the usual routine, makes you see some details and situations in a slightly different way, but it wasn't that stop that influenced my decision".

Stoner wrote that Ducati should listen to its riders more, they are the ones who make the results.

"As I said, I don't want to create unnecessary tension at this time."

What will it mean to take off your red gear at the end of the year?

“I'm not talking about this either. I can’t forget that Ducati and I, from the second year on, we climbed the slope together, we went through moments of suffering but then we reached the top. In recent seasons we have been fighting for the championship, something that other riders and manufacturers have not been able to do. I don't want to start sniping, I'm neither angry nor mean-spirited right now. The important thing is to know what you want, then everyone has their own thoughts. It's time to look ahead”.

Do you feel more peaceful?

“It's always best to be focused on one thing. In the past I had shown that I knew how to manage certain situations but I'm human, there are always some repercussions ".

Tomorrow is the race; can you win it?

“I will have a chance to do it, but it will be different than in the past. I will have to study a good strategy, because Pol Espargarò showed an incredible pace and Rins will also fight for the victory. Then there are very fast riders, like the Yamaha guys and Miller, I don't know if they can hold up to the end but they can create confusion. We will have to be ready ”.