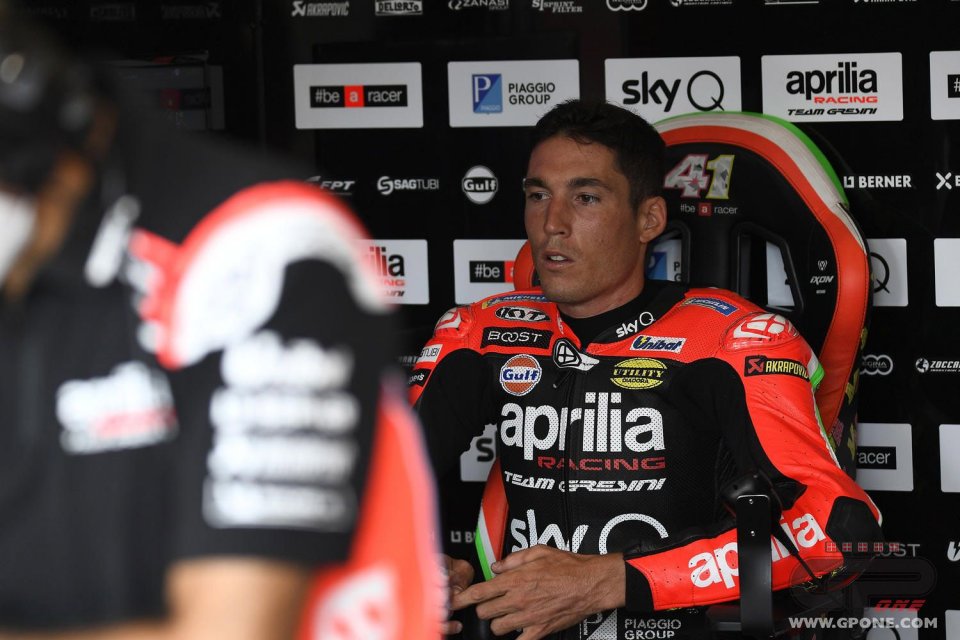 Aleix Espargarò crossed the Brno finish line in tenth position, finally scoring some points in this 2020 World Championship and putting together for the first time the potential of his Aprilia RS-GP 20. He did it on a track that on paper was not favourable for Aprilia, given that right here in 2019 Aleix had finished almost 40 seconds behind the winner Marquez. This year the gap to the winner, or Binder, was reduced to just 15 seconds. For some, this data could suggest a huge step forward for the Noale bike, but after pointing this out to Aleix Espargarò, a substantially different point of view immediately emerges from those observers who see it in a different way.

"The new bike is clearly better - Espargarò declares - and I like your approach in evaluating the data as you did and see the positive points, which are objectively there. But I'm a competitive type and I also see things in a different way. I look at the fact that the three strongest riders in Brno were riding a KTM, and this really makes me angry. Of course, our bike was better in Brno this year, also because last year it was perhaps the worst race of the season for us. Honestly in the race I didn't have too much confidence to push, but maybe it was also due to the two crashes in the Jerez race. In any case I didn't finish the race far from the podium, so I can be satisfied. I don't want to compare it with what we did last year, because it is right to compare ourselves with what our rivals are doing and we are still far from my goals. "

According to Fabio Quartararo, part of KTM's advantage in Brno depended on help from Michelin, which has apparently developed tyres suitable for the RC16. What’s your idea about that?

"I disagree with Fabio. But it sure is strange what we saw in Brno. So many people, including my friends, asked me what was happening in Brno and why the KTMs were so fast. I felt like someone who doesn't understand anything about bikes after spending 15 years in this paddock. I don't understand how they got to that level, but I don't think Michelin helped them in any way. Quartararo was the rider to beat at Jerez, and he used the same Michelins. That is why to say that Michelin was behind Binder's victory in Brno is not correct. Binder with the KTM had a great weekend and had a fantastic race. The tyres are different than in 2019, we all know that, but this is not the reason why KTM won in the Czech Republic. "

"KTM arrived in MotoGP after us, and now we can only applaud the work they have done. They have a different mentality than everyone else, a chassis that only they use. Last year with Pol it was clear that they had made some steps forward, but now Brad and Miguel are fast too. I am pushing hard in this project with Aprilia, as Aprilia itself is doing, but at the moment we are not where we would like to be. Here we have won many world championships, and we want to fight to be in the top five. We are still a long way off. Of course, I can say without any problem that this is the best Aprilia I have ever had, but it is still not enough. "

Now we come to the Red Bull Ring, a track that is not very kind to engines. Are you worried?

"Actually, last year I suffered more in Brno than I did at the Red Bull Ring. In Austria in some situations I was fast, but the RS-GP 20 is something else entirely, so everything will have to be verified. I'm positive, I think the improvements of the bike will be effective on this track. Last year I had a lot of chattering both in Brno and Austria, while this year I didn't have any chattering in Brno, so I hope I don't have any here either. I feel optimistic, in Brno I finished 10th, but in reality, I finished five seconds from the podium group. I came close, even though I know that we need another step to really fight to get on that podium. "

Going back to KTM, this will also be their home track. They have done so many tests here, will they be the bikes to beat again?

"Honestly, I don't know what kind of work they are doing in KTM. Pol is their best rider and I never talk about bikes with him. I think their mentality is very different from that of the Italians and even the Spaniards. They have certainly made a huge step forward with electronics, but in my opinion the real difference is the engine, the pure power. The KTM is a missile, when they straighten the bike and open the throttle, they are impressive. It looks like the Ducati of the best times. They have huge traction and I think in general their bike is no better than ours, but they have an engine that makes a very big difference. They can brake late; they don't stress the bike to get too much speed in the middle of the corner and this also helps with the tyres. "

"There aren't many secrets in this world. The more you invest, the more you work, the faster you get results. I hope we can learn a lesson from all this and maybe try to be more competitive next year. I know Aprilia is investing, it’s trying. But with the problem we had with Iannone, everything has become more difficult. Smith was supposed to be a tester and he is racing with us. The situation in Aprilia is complex, but I don't want to use this as an excuse. Lorenzo Savadori is doing a great job. "

What idea did you have about the episode between your brother Pol and Johann Zarco in Brno?

"It seemed like a racing incident. Honestly, and I say this not because I'm talking about my brother, if we're not on the last lap I don't think it's necessary to take a risk like that, as Zarco did. I don't see the need to do the manoeuvre that Johann did at that moment ".