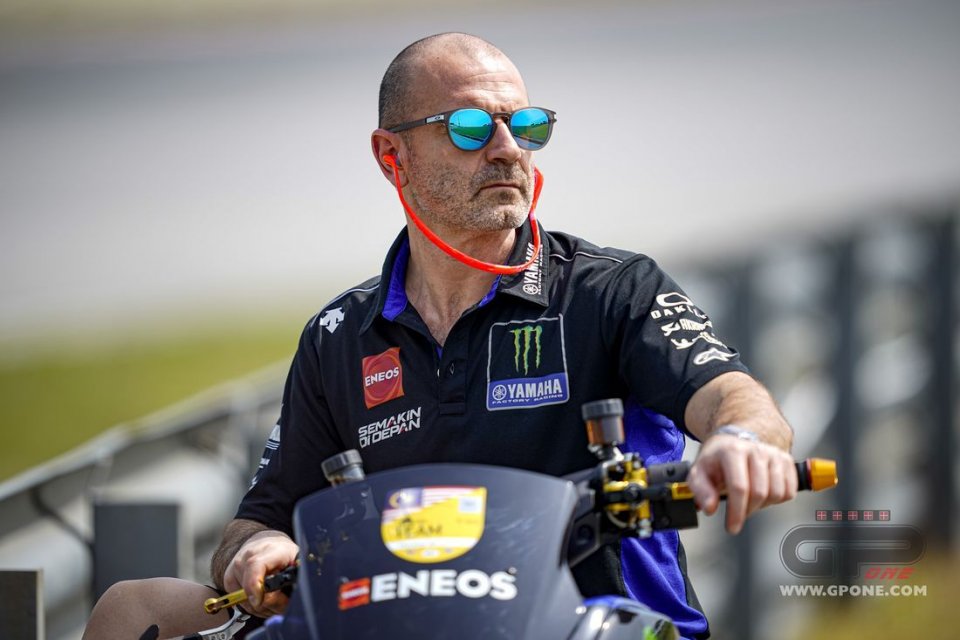 At Jerez, Yamaha's dominance was clear, with two wins by Quartararo and a podium monopolized by the M1s in the second race. But all that glitters is not gold now, because there are some concerns in Iwata and they are about the reliability of the engines. Vinales has already punched all 5 of those available until the end of the season, the other brand mates are at 4.

What is going on? To give us an answer was Massimo 'Maio' Meregalli, team manager of the official team.

"Ever since the first problem occurred, Iwata has started working non-stop to try to understand the cause. Until we don’t have any certain information, we won’t add anything else” he tells us.

"I confirm it, we want to be sure of what happened and then we will take the first step."

"I have confidence in our engineers, so for now I keep that confidence."

Brno and Red Bull Ring are tracks that demand a lot from the engine, will they be a problem or were the African temperatures at Jerez worse?

“The heat was not a cause, it was the first thing I asked and they said no, the oil and water temperatures were high but under control. Usually these tracks scare me because we are still a bit down at the level of top speed, so I'm more concerned by the characteristics of these circuits than by the reliability of the engines ".

However, some manufacturers turned up their noses due to the fact that you used a fifth engine for Vinales in the second race ...

“The regulation stipulates 5 engines for a championship of up to 14 races, at that moment the published calendar included 13 with another 3 still to be confirmed, so I think ours was the right interpretation. I don't know why some manufacturers wanted to point this out, the Federation approved our request ”.

Let's leave the engines aside, then, and talk about Rossi's recent podium. Does he still manage to surprise you?

"What he did at Jerez was really awesome, even from a physical aspect. Twenty-five laps with 40° C air temperature and 60 on the track are really difficult to do at 41 years of age. After the race, I confessed to him that I expected his possible drop at the end of the race because the conditions were extreme. Instead he kept going and I saw other riders more fatigued than him at the end of the race. "

Has he finally found the right path?

“Let's see how he goes here and in Austria, but I am optimistic. This is nothing new but it was a balance of the bikes that we stopped using a couple of years ago because it was a bit too aggressive on the rear tyre. From mid-race onwards we were suffering and we had started to distort the balance a bit. Now, with the new tyre and an engine that has a better power delivery, Valentino had a slight decay of the tyre, but only in the last 3 laps. Above all, he managed to ride the bike the way he wanted, which was impossible for him with the balance he had used in the first race in Jerez as soon as the tyres dropped. "

Will Brno be decisive?

"This solution worked in Jerez in extreme heat, other conditions we used to suffer in, so I expect it to work here as well."

Are other riders also using this balance?

"Only Valentino was struggling to ride with the other set-up, until the last race all four Yamaha riders used set-ups that were remarkably similar to each other. I'm not ruling out that someone might try it, if we talk about outright performance this balance was even better ”.

Why did Rossi have to put pressure on you to go back to using it again?

"There was a concern that the problem with wear would remain, so there was some hesitation. It also happened in the past when there were problems with new material, usually there is the desire to continue in that direction, and only when the situation becomes difficult can you go back".

How much has Munoz's arrival as crew chief had an influence?

"David has given me the impression of a person who believes a lot in himself but does not show it, he has a closed character but he carries through his decisions. He's very calm, it's definitely a positive first impression, even if it takes time to judge a technician”.

Were you happier to have scored first a 1-2 and then a 1-2-3, or disappointed to have been beaten twice by Quartararo?

“The most important thing is that a Yamaha wins; if it had been ours it would have been even better (laughs). I'm a Yamaha man anyway and these were important results, it wasn't happening a lot, there were special circumstances, but we need to take the opportunities ”.

How did Vinales react to two second places behind Fabio?

"I like Maverick's attitude, even during practice he never gives up, he always tries, the same he did when he tried to pass Quartararo at the last corner of the first lap in the second race in Jerez. Unfortunately, he struggled to overtake Vale and when the front tyre doesn't take in fresh air, the temperature and pressure rise and you start to struggle. I am convinced that he could have fought for the win”.

Also considering Morbidelli's performance, do you think Yamaha has the best line-up ever?

"From the inside, I undoubtedly say yes, that's how it is this year and it will be for the next few seasons too".

These three races will be a crucial moment of the season, where will Yamaha suffer more?

“It might, but what we saw in Jerez is very indicative because we dominated both races with conditions in which we normally suffered a lot. I'm really curious to see how it will go and I'm also confident for the races in Austria ”.

A. Espargarò surprised by his pace after making the bike longer like Maverick

The official announcement came today. The rider from Ascoli: "I have no expectations other than to return to a serene and clear climate inside the...
19 hours 18 min ago

This is the first MotoGP pole for Honda since Pol Espargaro at the British GP last year (21 races), ending the longest sequence of successive premier...
1 day 12 min ago