BSB is back! This weekend, 292 days since the last race of last year, British Superbike is finally back on track for the debut of this crazy 2020 season. The opening venue for the production-based series will be Donington Park, ‘National’ version.

British Superbike is the national Superbike championship par excellence, where riders get to use the more than 200 hp of their motorcycles without any kind of electronic assistance. After the acquisition of the rights by MSV Racing in 2008 and the introduction of a technical regulation capable of reducing the differences between the bikes, the series has benefitted massively. After the new formula had been written off far too hastily, BSB is now a globally recognized brand, and now comfortably sits mid-way between the world championship and the others of a national calibre.

The starting grid, everyone against Ducati

A total of 27 riders will take part in the new season, confirming the excellent state of health of the UK championship. A complete grid with the presence of Ducati, Kawasaki, Honda, Yamaha, BMW and Suzuki.

The number one favourite for the title is surely Josh Brookes, champion of the category in 2015. The BSB "Bad Boy", after an incandescent duel with Scott Redding in 2019, will want to return to the top slot on the VisionTrack PBM Ducati Panigale V4R. With Redding switching to World SBK, eyes also will be on new teammate Christian Iddon. For "Iddo" this must be the year of his definitive leap in quality, at his first real shot of a title at the end of a long partnership with TAS BMW.

Without forgetting Tommy Bridewell, the fastest in the Monteblanco winter tests and the only entry in the MotoRapido Oxford Racing Team. Last season he was one of the protagonists on the Panigale V4R with overall third place, behind the PBM Ducati combination. His victory in Race 3 at Oulton Park put an end to a four-year fast.

Team Massingberd-Mundy Kawasaki can on the one hand count on Danny Buchan, fourth last year with two victories, and on the other Lee Jackson, back in BSB after a positive two years in the British Superstock 1000. Nigel Snook's team, this year the Akashi manufacturer’s benchmark squad in the UK, proved competitive in the final tests last week with Jackson at the top of the timesheets.

We should also keep an eye on Yamaha and Honda. Team McAMS brings the new YZF-R1 2020 to the track, renewing its confidence in Tarran Mackenzie and Jason O'Halloran for a second consecutive year. A bike similar to that used by Michael Van der Mark and Toprak Razgatlioglu in the World SBK, electronics aside. Steve Rodgers' team is in constant contact with the Yamaha Europe base, a collaboration of vital importance for the development of the chassis and suspension. The Santander Salt TAG team with Dan Linfoot and the reigning British SS600 champion Jack Kennedy are also on the track with Yamaha bikes.

At Honda Racing UK, the focus is on the CBR 1000RR-R rocketship with “Stealth Mode” livery. Despite a late track debut compared to the competition, the brothers Glenn and Andrew Irwin proved to be fast in last week's tests. The new CBR impressed well in its first direct face-off with the opponents, now it needs to confirm its potential in the races.

In BMW, spotlights are on Peter Hickman and Alex Olsen (Smiths Racing) and, above all, on the Synetiq BMW by TAS duo made up of the reigning British STK1000 champion Taylor Mackenzie and Bradley Ray. With the latter looking forward to making amends after a few complicated seasons with Buildbase Suzuki. The new S1000RR experienced a troubled debut, but now, thanks to the consolidation of the partnership with Munich, expectations are high: a return to victory. Everyone at OMG Racing is ready to cause an upset with the former MotoGP rider Hèctor Barberà, who looked good in the pre-season tests, and Luke Mossey.

New line up for Team Buildbase Suzuki for a season in which the goal is to grow and improve wherever possible. The two riders are the former British Superstock 1000 champion Keith Farmer, returning after the bad injury of 2019, alongside the reigning British GP2 champion Kyle Ryde.

Once again in amongst the ranks of the RAF Regular and Reserve Kawasaki team is youngster Ryan Vickers, something similar for Joe Francis on the BMW of Lloyd & Jones Bowker and Josh Owens with CDH Racing Kawasaki. Meanwhile the experienced Gino Rea will be on the Bike Devil Team Kawasaki. Rookies are Bjorn Estment (NP Motorcycles BMW), Brian McCormack (The Roadhouse Macau Racing BMW) and Graeme Irwin (Team 64 Motorsport Kawasaki).

Calendar with no end-of-season playoffs 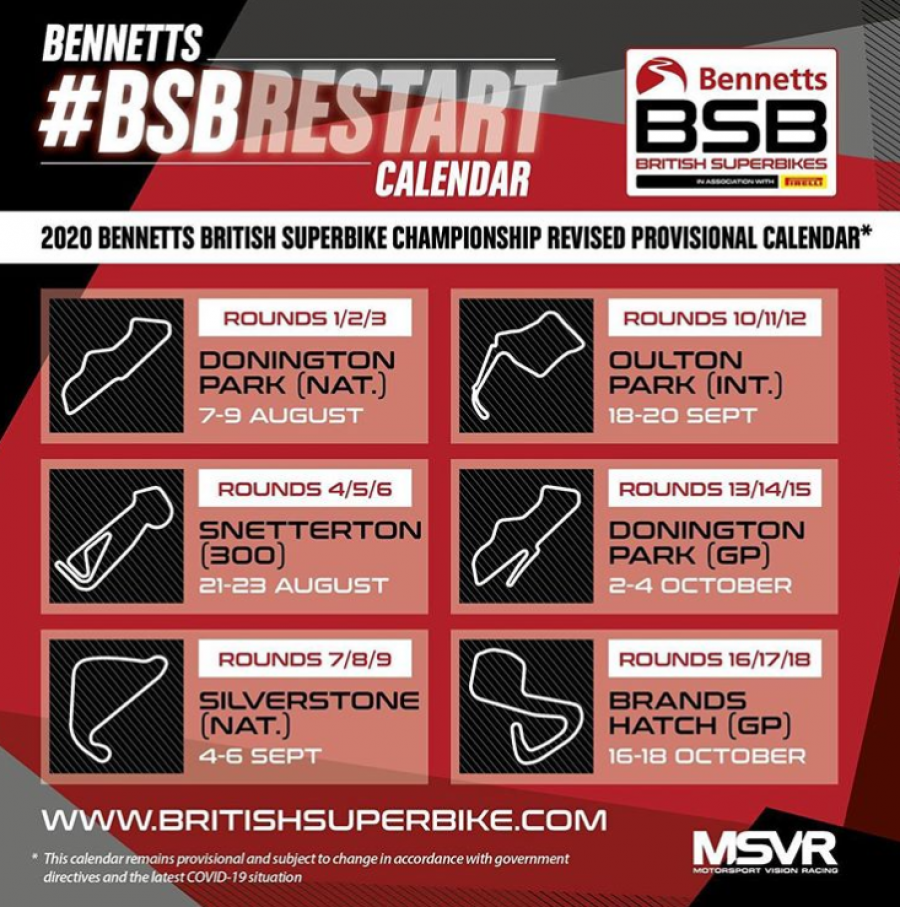 The health crisis has also had its consequences in BSB, with the new calendar including 'only' six rounds, of three races each, all without Showdown.

The first appointment this weekend on the National circuit of Donington Park (7-9 August), followed by Snetterton (21-23 August), Silverstone National (4-6 September), Oulton Park (18-20 September), Donington on the Grand Prix layout (2-4 October) and the grand finale at Brands Hatch scheduled for 16 -18 October.

There will be 18 races overall, against the initial 27. The so-called 'playoffs' of the final three rounds will not take place. All races will therefore be valid for defining the championship standings. A forced and wise decision, due to the situation.

No fans in the grandstands

Going back on what had recently been announced, BSB British Superbike has also surrendered to the restrictions imposed by the British government. Despite the fact that the championship records a record turnout every weekend, promoters MSV Racing had to step into line after attempts of the last few days proved to be futile. At least the first three events of the 2020 season will be held strictly behind closed doors, therefore without the presence of the public.

News also with regard to the weekend race program, revised in order to save one day of overnight stay for the British top-class teams. On Friday, therefore, they will only take to the track in the afternoon with a single free practice session. FP2 on Saturday morning, preceding the single 25-minute qualifying run. No more elimination, unlike the past seasons. Race 1 is scheduled for Saturday afternoon, with the remaining two races on Sunday.

Here is the time schedule of this weekend; but remember there’s a one hour less time difference with Italy. 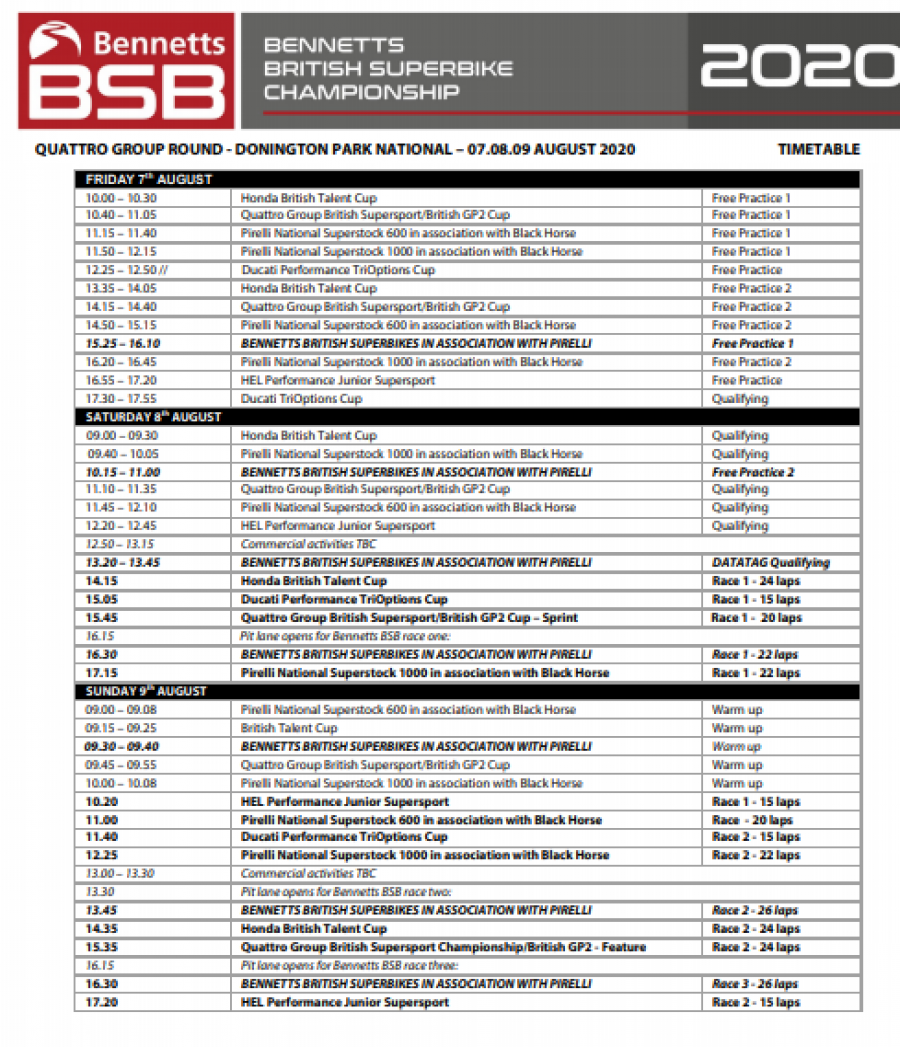