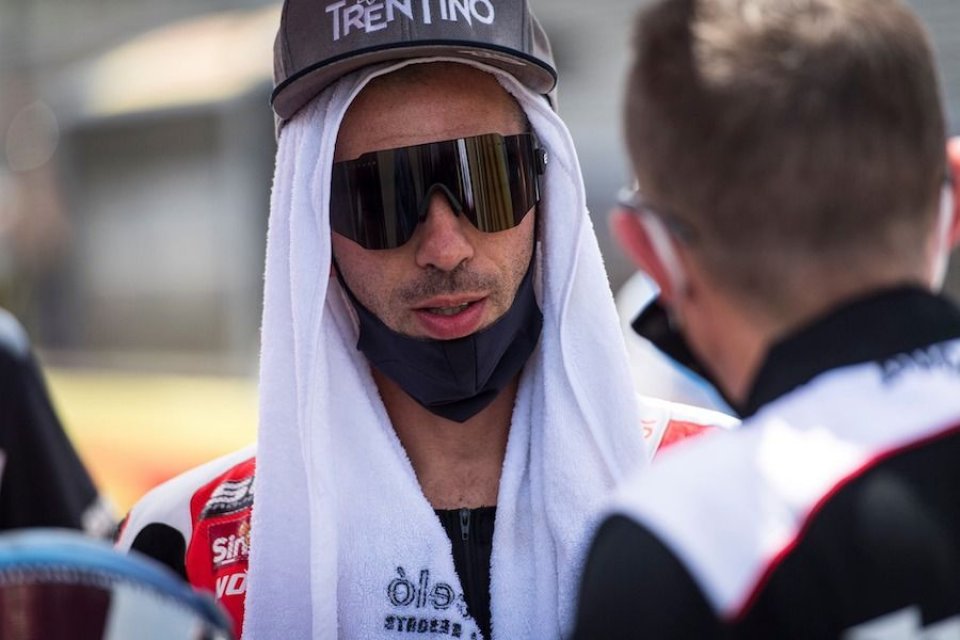 Out of all the many returns in these weeks of motorcycle racing one that is quite possibly a bit more unusual than the rest, that of Marco Melandri. The Italian rider had hung up his helmet at the end of last season but then, in mid-July, he decided to accept the call from Team Barni to return to racing in Superbike on the Ducati V4R. Marco's first weekend is now over and it ended with a haul of 15 points.

“I have to say that the races went well, I am very happy - Marco told us at the end of the day - I thought I could finish in the top nine in the Superpole Race this morning but I did not succeed. It was a test weekend, this morning I did a series of tests that did not work out well and in addition I was stung by a wasp halfway through the race ".

What do you think of the Ducati Panigale V4 R?

"This bike was born to go racing, it has great character and you have to understand how to adapt it to your way of riding, it seems a bit like a MotoGP bike because it is nervous but the engine allows you to ride it smoothly".

How did Race 2 go instead? You finished in ninth position, close to Alvaro Bautista.

"It went well but I was hoping to get a better start, unfortunately there was a lot of filler on the outside of turn 1 (due to the accident of De Rosa and Bassani in Supersport 600, Ed.). I had difficulties overtaking and in fast corners but I understand why. I made a lot of effort today but I'm not far from the middle group. I was with Bautista for a good part of the race and Rea arrived 6 seconds in front of me, not bad for someone who two weeks ago was on a bicycle ".

What level do you think you can reach by the end of the season?

"This weekend I started with the worst conditions; I’ve got a lot of desire to do well but I have to be patient. I couldn’t pretend to come here and be in front of everyone. I am sure I can get to the point where I’m fighting with the top guys, I threw myself into this challenge because there are six rounds which are not many but not few, I have time to get my confidence back and improve. Changing teams is always complicated, doing it after being stationary for so long is even more difficult. In any case, I know what my difficulties are and the ideas for fixing things are not far away. "

You have joined the Barni Team. How is the feeling with Marco Barnabò's guys?

“I really like the team; I have a lot of experience and they have a great passion. There is a desire to do well and they too come from a difficult period, I believe that together we can achieve some satisfactory results. "