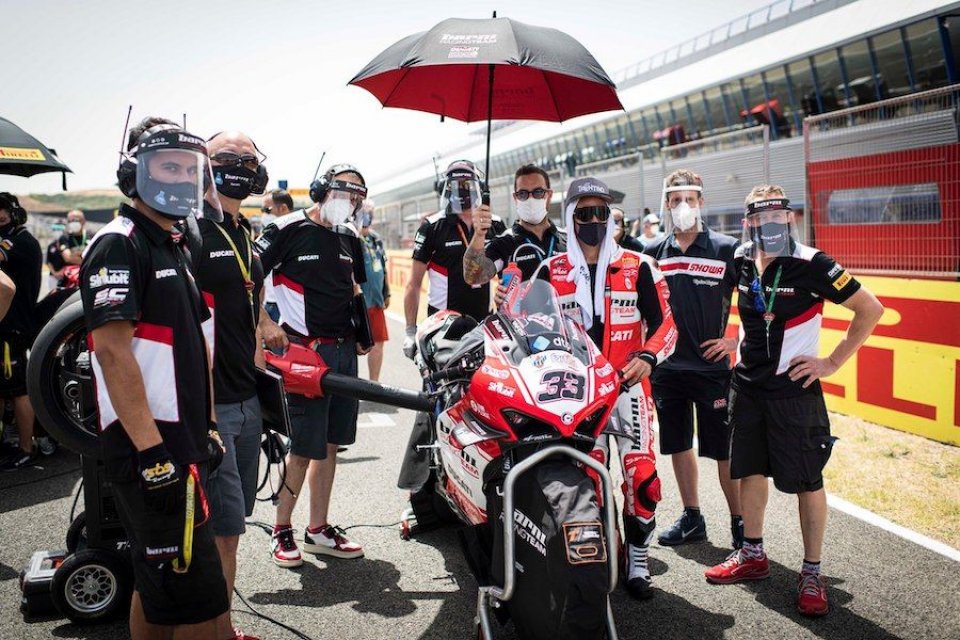 The first post-Covid race of the Superbike season at the Jerez circuit finally gave us a victorious Ducati after Scott Redding's triple third place in Phillip Island. Scott took advantage of the work done in the tests after the lockdown today and managed to win his first race in the category, also leading the championship standings. Behind him, Ducati went well with 4th for Chaz Davies, 6th for Michael Ruben Rinaldi and 8th for the newfound Marco Melandri.

Marco, first race on the Panigale of the Barni team and you grabbed 8th place after a good comeback. How did it go?

"It was a really good race - Marco told us – even though I am a bit disappointed with what I did in Superpole. During the race I made a mistake in turn 6 on the first lap, I lost the rear and found myself last. So, I tried to recover. "

How does this eighth position fit in with the goals you set before this weekend?

“My goal was more or less in line with what I did today. I am happy with the pace I had throughout the race and my physical condition. The problem was qualifying, I can't start from the seventh row, I want to be in the top three at least in the next races ".

What is missing to improve also in qualifying?

"I suffer a lot with the front in the middle of the curve because the rear moves too much and I find it difficult to return to the trajectory. I have to keep working, today we made some steps forward in the set-up regarding the rear of the bike while now we have to focus on the front ".

How are you getting on with the V4? Before this weekend you had only done one test, are you still getting to know each other?

“This V4R suits my riding style quite well but I know I still have to work on myself. The team is understanding what I want from the bike and we have room to improve. This bike has a great engine."

What was it like to go back to the grid and then starting when the traffic lights went out?

“It was really fun, I felt good on the bike for the whole race. I am still a long way from the podium but I was not too far from the second group and with a better qualifying and a more solid start maybe I could have been with them ".

"You can't think of the championship when you finish 14th, but I’m not putting myself down too much. The tyres are all round and black, but today...
2 hours 18 min ago

Yamaha hasn’t yet figured out the M1 engine's problems, but Franco in Brno mounted his last available one, Rossi and Quartarato at their 4th
8 hours 39 min ago

Marco finished Race 1 in 17th position in Portimao: "I couldn't stop the bike, I have to try to keep my morale high."
14 hours 4 min ago

1-2 for the new CBR with his brother Glenn, third Brookes on the Ducati, technical problems for Barbera. Tomorrow more of the same with Race 2 and...
1 day 1 hour ago

The German rider is better even though he has suffered a major trauma, fortunately without suffering neurological complications. He will be operated...
1 day 1 hour ago

The American sets second pole of the season ahead of Lowes. 10th Marini, 21st the leader Nagashima
1 day 7 hours ago