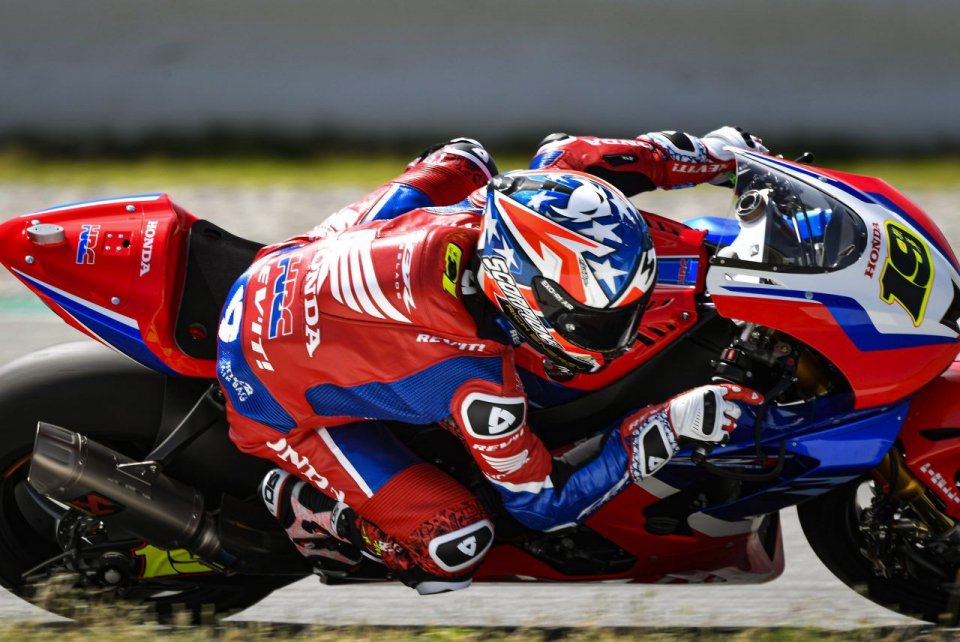 Alvaro Bautista ended the first day of practice at Jerez with a performance worth highlighting. Fourth quickest time in the combined classification of the Andalusian Friday of the SBK round is undoubtedly a great result for the Spaniard and for Honda, who after the tests at Aragon seem to have found the way to showing a level of competitiveness that in Australia seemed a long way away.

The excellent work done by the HRC technicians and the increasing confidence between the bike and the rider, today gave a taste of what could lie ahead this weekend for the pairing made up of Bautista and the CBR 1000 RR-R.

Tell us the secret, today you were really fast…

"There are never any secrets. It's all a question of working, then working again and again - said a satisfied Bautista - As I said yesterday, in the tests we did at Aragon before coming here we tried several new components, different geometries and also some changes regarding electronics. I took a step forward especially regarding my feeling, which is even more important than the lap times. When you feel good on the bike you can push in any kind of condition, like today here, when we found a great heat and a very slippery track. My feeling remained that of the Aragon tests and I managed to be consistent throughout the day. There are no secrets, the important thing is to feel good on the bike and from this point of view my situation has changed a lot compared to Australia, and that's all. "

It seems to be a clear step forward…

"We are still developing the bike; it is a new project. In Australia we were only at the beginning, now we are on the right path and we are progressing with development. We are not yet at our full potential for sure; we still have a long way to go before we get there. "

In Phillip Island you said you were at 50% of your potential in the race. Here how much will you be?

"This Sunday I will be at 55%! I think my feelings have improved a lot, I still cannot ride the bike as I would like, but I am getting close to it. I think it is on this track and Portimao we will keep this set-up, from the point of view of electronics and geometries, and after Portimao we will have another test at Aragon and we will try some new things and also some ideas that we have. I hope to be able to take another step forward, but both here in Jerez and Portimao we will keep the current set-up, fixing the small details according to the conditions that we will find ".

This is your home track, but is it also your favourite?

"This, despite being the home track for me, is not one of my favourites, but not the worst either. I certainly know the track very well, the references. Jerez is special, it changes a lot during the day, sometimes you have grip in the morning and then in the afternoon nothing, it almost seems like another track between the morning and the afternoon. The important thing will be to work again for the races. Today I was very consistent on the pace and we tried all the Pirellis available ".

How did you get on with the new tyres brought by Pirelli?

"The latest Pirelli is not really my favourite tyre, but sometimes when you try a new tyre it doesn't work immediately, then you just need to make a few small changes to the bike and you immediately find a big advantage. But now in our situation we can't afford to change the whole set-up of the bike for a tyre. I don't want to lose these good sensations; I don't want to go beyond what our potential really is today. "

Is there still a lot to do before we see the full potential of the CBR?

"I think the CBR has great potential, but it is still not at its best. It can be enough just to win a race, just look at today's standings to think that it's feasible. But in the race, you have to do twenty laps in a row, it’s even hotter, the conditions are different. Our goal today is not the position, but the performance. I am happy with the sensations I have now, I don't want to lose them. "

If they had called you up to replace Marquez, would you have accepted?

"I have no idea. I should have received a real proposal to evaluate something like that."