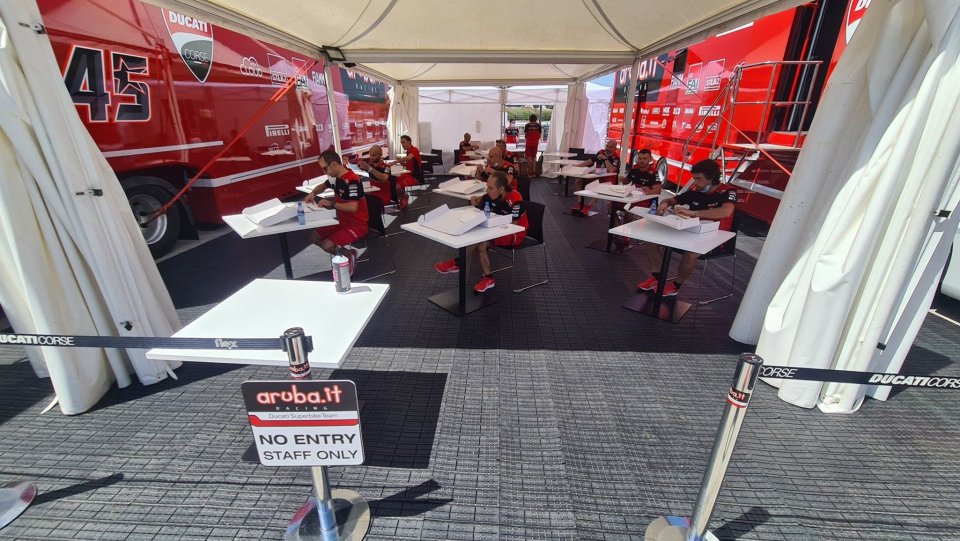 On Your Marks, Set, Go! After the binge that MotoGP gave us, it's now time for Superbike, which is back in action after a five-month period of inactivity. We abandoned the scene last February in Phillip Island and we are now in Jerez after a pause of more than 150 days.

150 days in which the world has changed and has got to know COVID-19, something that has conditioned and upset our habits at the same time. Yet the engines were not turned off completely, on the contrary they started to roar again, first with Formula 1, then with MotoGP and now with the production-based series.

As we already know, the post-lockdown restart will see a new situation inside the paddock which working personnel will have to face and a situation they would never have imagined before. So let's go in order, giving you a tour, starting with the entrance to the paddock. 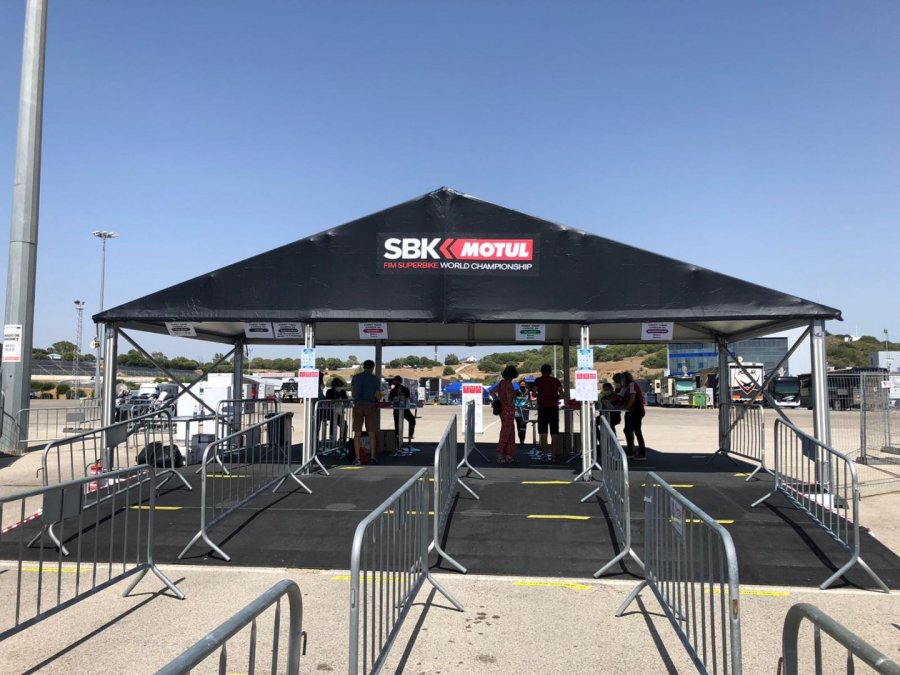 Compared to MotoGP, SBK relies on a different protocol. In the MotoGP, in fact, those who have been allowed by Dorna to set foot in the paddock must send the Organizer the negative result of the swab and serological test, through a specific App. Dorna then releases a code that each person must show on their mobile device when entering the circuit. Obviously, before entering the circuit, each person will undergo a body temperature check. If this is above 37.5 degrees, access will be denied.

It’s different in Superbike. Insiders who have had approval from Dorna will have to present themselves at the gates with a simple self-certification that confirms they are in good health. This self-certification was sent to each person exactly two weeks before the Jerez round, after which it must be sent back electronically countersigned. In this case, the swab is therefore not required, and neither is the serological test before the start like the colleagues of MotoGP.

YES TO MEDIA, BUT NOT ALL

Then there is the matter of the media. As we already know, in the MotoGP world championship the only media allowed are the televisions that have purchased the TV rights. Therefore access is denied to print and web media.

In Superbike, however, Dorna has selected a small group of journalists who will be able to set foot in the circuit. The number is less than 10. We of the GPOne editorial team were among those selected to follow the race weekend on site. 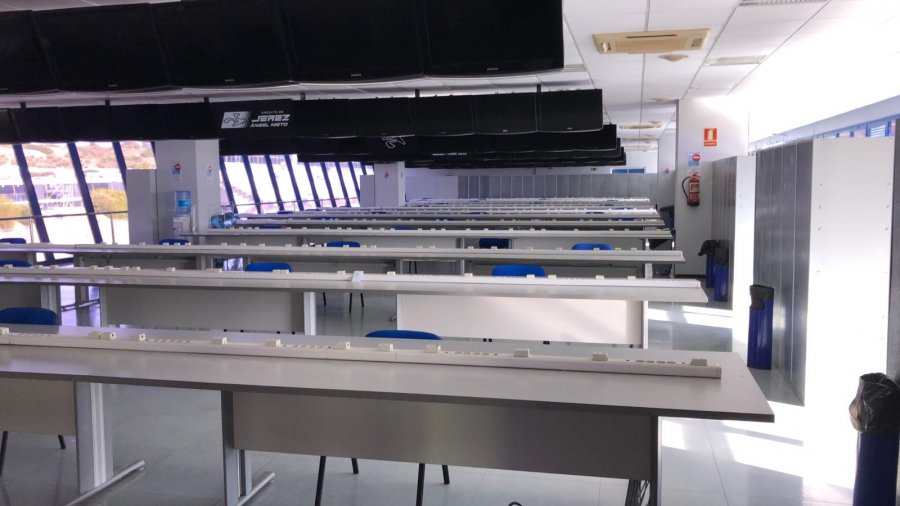 The question arises spontaneously: why in MotoGP can’t journalists go to races and in Superbike they can? The answer, in fact, is simple: in Superbike the only TV on site is Eurosport, which has no more than five or six people present including journalists and technicians, unlike in MotoGP, where the TV media reach a total number of around 40 staff on site, the maximum figure allowed by the Organizer to access the press room. For this reason, in Superbike, Dorna has also allowed access to print and TV journalists.

Still on the subject of media, there will be a meeting between press offices and organs of information during the day, where it will be decided how to plan the end-of-day interviews. At the moment there is still no confirmation, even if the feeling is that we will follow the MotoGP line, i.e. everything done through Zoom.

Finally, one of the key aspects of the restart regards how meals are managed in the various teams. The post-lockdown Superbike will start again without the classic hospitality units that dominate the paddock. These will in fact be replaced by awnings as Ducati’s Serafino Foti explains: "According to the Dorna protocol, only Factory teams can bring their own kitchen truck to the paddock - he told us - we will set up a tent near the garage, where only members of the teams will be able to enter to eat their meal, obviously maintaining the required safety distances ”.

One of the new features is the way the meals are administered: “The guys in the team will be given a lunch box, containing a starter, first, second, dessert and a drink. The unusual thing about the lunch box is that by the day before, each member will have to make a request through an App of what he wants to find on his menu the next day for lunch and dinner. This is because the moment each team member comes to team tent, he will have everything ready. There will therefore no longer be the traditional buffet as we have been used up to now, but boxes with what was ordered inside. Our service is for all members of our team and also for the other Ducati teams, if they are interested." 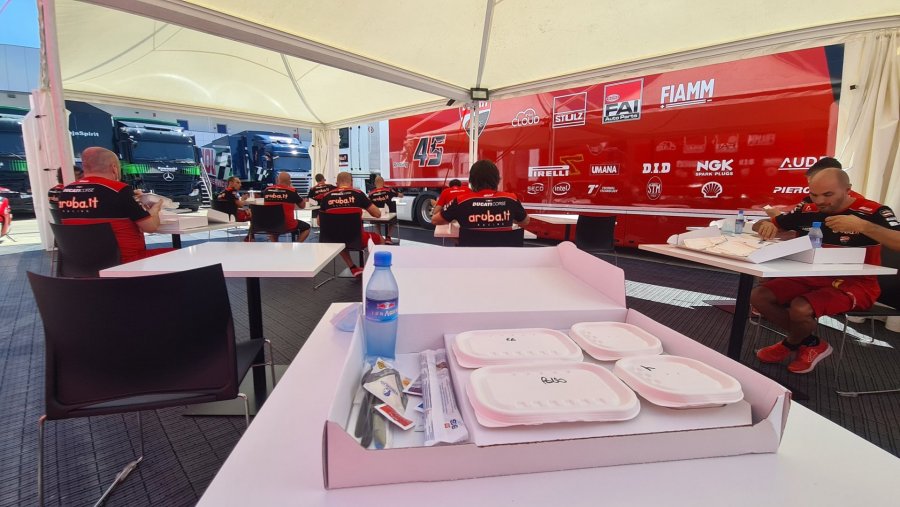 These are the key points of the Superbike restart, without forgetting that the use of masks will be required inside the garage. Certainly, it will not be easy to live with the heat that is expected to reach 40 degrees, but health comes before anything else.

In short, as mentioned, it will be a WSBK championship that will restart under the banner of rigour, limitations and social distancing. To overcome this challenge, common sense will be paramount for all concerned…

"It costs too much and I’m staying in Aragon: Covid worries me. I am a bit of a hypochondriac, but Arbolino's case is serious. The first lap was good...
8 hours 2 min ago

Asymtpomatic and in isolation along with a second staff member, who tested negative, even if he worked closely with the technician
1 day 3 hours ago

Roberts will now take the next step in his career and move to another top-level team (Italtrans) in the championship at the end of the season. He...
4 days 8 min ago

Instead of the usual dividing panels, the MIE Racing Honda team has installed LED panels weighing 5 tonnes in its garage
4 days 1 hour ago

Dr. Mir confirmed the diagnosis of the Le Mans circuit of three toes and a fractured lateral malleolus. The Spaniard has already started his...
5 days 4 hours ago

The South African of Italian origin will line up at the start of the Brands Hatch finale on the GSXR-R 1000 of Brad Clarke's team. The Australian...
6 days 22 hours ago

Pol Espargarò: “The best of the KTMs? I want to be in front of everyone.”

“At the beginning of the race, the Ducatis were unreachable. I only thought about the podium at the end. Now it’s fun, but I have to be more...
1 week 1 hour ago