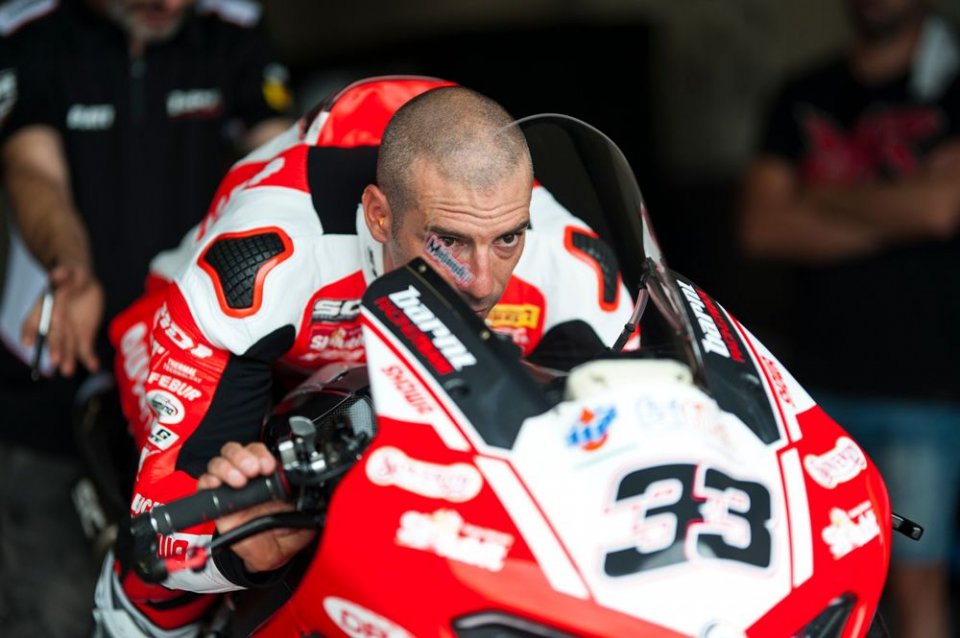 Sometimes they come back! It is appropriate to say so in the case of Marco Melandri because Jerez and Superbike once again give a warm welcome to him after more than nine months. A period of time that allowed the man from Romagna to reflect for a long time on his decision to retire and then go back on it.

The #33, in fact, had the opportunity to meditate deeply on life away from racing and the challenge with the other riders on the track. It was such a big attraction that he could not refuse when Marco Barnabò offered him the seat of the Barni Ducati V4. So Marco is back and happy to tackle this new challenge with the Rossa from Borgo Panigale.

“Until a month ago, in normal conditions, I would not even have considered this idea - Marco said - among other things Barni contacted me last winter to do a test in place of Camier and I wasn’t really interested. But later I became passionate about electric bikes and the opportunity to be able to do some races. Unfortunately, however, they cancelled them all because of the spread of COVID-19".

So how did you react?

“It was all a succession of things and situations, also because one day I went to ride a motorbike with my friends and I remember having a great time. Later I receive a screenshot from Vergani about an exchange of messages with Barnabò, where Marco said he was looking for a rider. As I read them, I looked at the calendar and a light bulb came on, seeing as Superbike had few races on the schedule. They were all in Europe and on tracks that I have always liked, moreover the idea of ​​riding a Ducati had stayed in my head. Finally, I didn't accept that career ending from last season, since I didn't deserve it and I didn’t want it ”.

So you decided it was the right time to come back?

“At that point I looked at the clashes with DAZN, there were only two, and I agreed. It is not easy to return, also because I had reached a certain balance inside me. These first months of 2020, however, have helped to eliminate all the negative thoughts I had inside me and at the same time given me new energy to deal with certain situations with a different spirit. I think it is fate that has chosen for me and personally I feel really good ".

Before arriving in Jerez, you did a test at Cremona...

"Right, I did that test on an unusual track like Cremona to prepare myself better for this weekend. Here at Jerez I expect a strange race, since the asphalt will not be the same after the MotoGP has been on it and it will be very hot. "

What are your expectations?

"Honestly, I don't know, even if I believe a lot in my feelings. The first contact with the Ducati V4 was undoubtedly positive. However, I expect more difficulties over one lap than managing the race. So we'll see Saturday afternoon how we are and what I can do. "

What struck you about this bike? Many say it is a street MotoGP bike.

“It is a very different bike from the previous Panigale with an engine that never ends, although some chassis characteristics remain similar to the V2. Certainly the V4 has a massive torque range and I want to see if with my work I can overcome some difficulties encountered at Cremona. The fact that I tried the bike on that track, not in top condition, however, I consider to be useful".

Does this V4 remind you of any bikes you have ridden in the past?

"It is a motorcycle born for racing and many years have passed since my last MotoGP race. Perhaps the engine is reminiscent in some ways of the five-cylinder Honda with a fluid and really nicely rounded engine "

Marco, do you have everything to lose or gain from this return?

“If I had something to lose, I would have stayed at home, instead I am here at Jerez, since at worst I would have missed a weekend. Inside me, however, I have a few teeth that are rattling around and with this bike I would like to take them out (ironically) ".

Last year your farewell seemed certain, but now it's strange to see you again…

“Having lived all my life in racing, I was missing the mentality of being able to challenge others. With a normal championship I would not have accepted, also because at home I found a good balance, and also with DAZN I’ve started a good adventure. Here I have no pressure, obviously I'm here to do well and I haven’t come for a stroll in the park ".

What do you think of the Rea-Redding challenge? Who do you see as favourite?

"Since I’m also going to be in it, I’m not going to comment (smiles)"