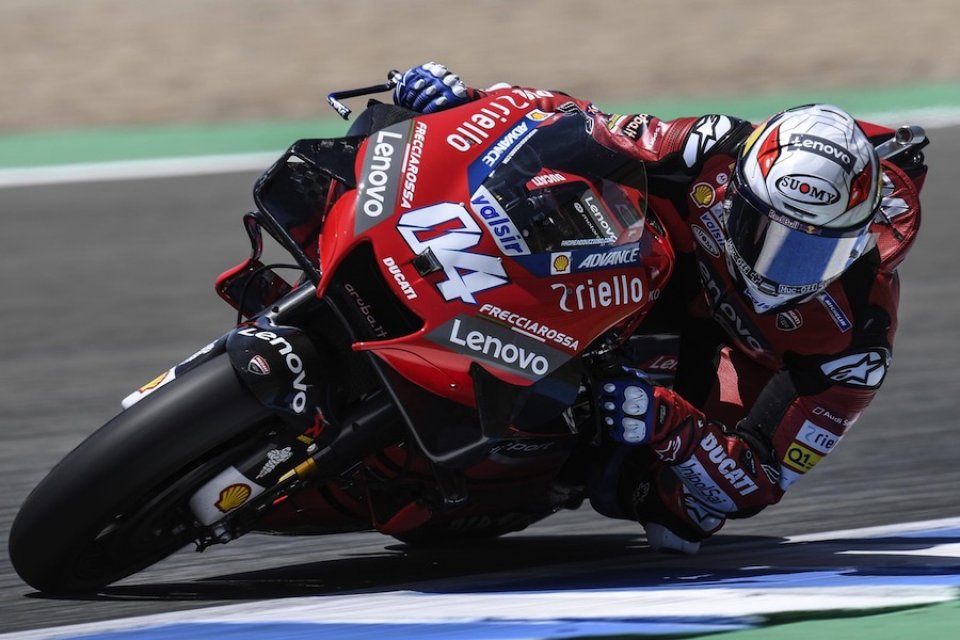 After last weeks’ great podium, a lot of observers expected a competitive Andrea Dovizioso also during this weekend. Instead, in today's qualifying, the Ducati rider had to surrender in Q1 and settle for the 14th spot on the grid.

"After the race on Sunday I was happy with the third position but not with the rest - Dovi told us after qualifying - I expected a few more improvements but we did not succeed if not in terms of set-up since I am much better at the front ".

What continue to be the grey areas of this bike?

“Braking, handling of the rear tyre and balance are to be improved. I'm not riding like I know I have to ride, I'm not fluid on the bike. "

What shape are you in for tomorrow's race? In the warm-up will you try something new?

“It will all depend on the start; I have a good pace but I cannot afford to make up too many positions during the race. Tomorrow I might try something completely different, we will see what result it will give. Unfortunately, I am forced to use the race weekend to develop the bike, I am not working on the details like last year. Tomorrow morning we might try these new things, if they go wrong, we will use the base of the last race, which will not be particularly great since I will start from 14th place ".

What do you think of Marc Marquez's day? After seeing him on the track in FP3, did you expect him to abandon?

"Marc did something special again. After what he fractured you have to congratulate him just for the fact that he thought about trying to race. He also showed he was very smart today to abandon when he didn't feel 100% sure. "

Danilo Petrucci today complained about the braking and the fact that the bike is never consistent in its behaviour. Do you also have the same problems?

“Danilo and I ride in a different way but the same thing happens to me and to him. Miller and Bagnaia also ride differently from me, but they manage it better when they have new tyres, while on the pace they are not going better than me. The bike does not change every lap, the problem is not being able to manage the sliding and this makes different things happen every time. I cannot do a consistent run; this is not my way of working and it confirms the fact that I am struggling ".

A lot of riders, including Valentino and Quartararo, are admitting that they have changed their style this year. Do you think this is a common problem for all of you?

“During the tests that we did last season nobody pushed hard with the new tyres because nobody wanted to take more risks. All the problems of the new Michelins came out in the tests at the end of the season and at the beginning of 2020. We had all been riding for years in a way that now it is no longer possible to replicate, we need to change a lot of things on the bike and it takes time. I believe that Quartararo and Valentino are not serene because their afternoon pace went up. Each bike has its own reactions but these tyres are affecting the outright speed of the Ducati. Valentino is not better on the pace than me, but he went into Q2. The riders ahead know how to ride to make a good race, at the moment I'm not riding the way I would like and in the race everything is more complicated. "

Can today's performance also be traced back to your shoulder injury? Are two weeks of racing making the situation worse?

“The shoulder has no problems, the only thing that makes me remember the injury is the wound and the fact that I have to put a plaster on before going on the track because the scar is a bit sensitive. "