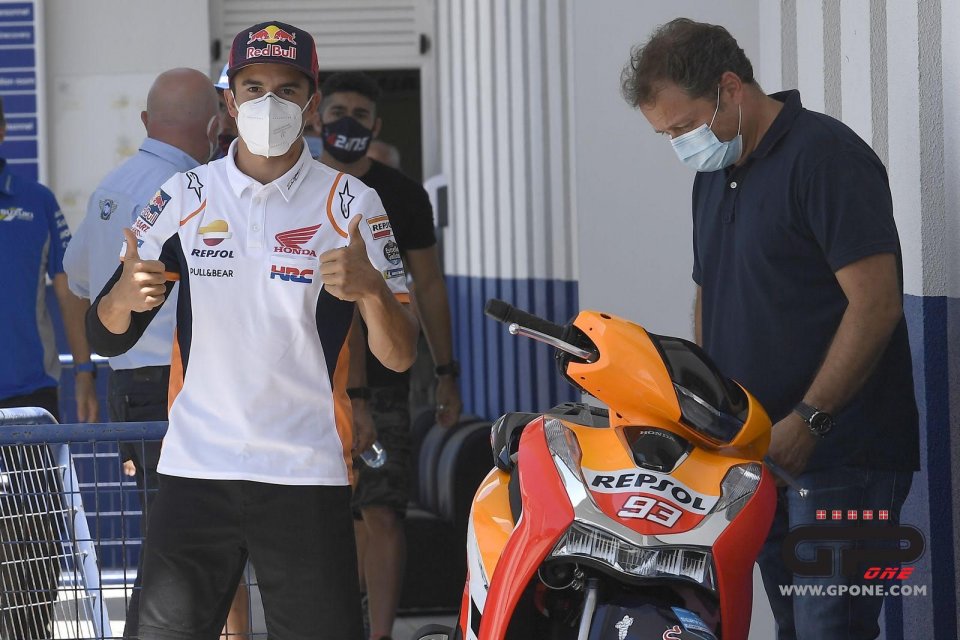 On Sunday evening, Marc's team had dismantled the garage and then returned home. The mere thought of seeing Marquez out on the track in a few days seemed madness. Yet that's what has happened, in fact the Spaniard also convinced the doctors to let him try to race.

"Nobody expected to see him here, we were all very worried after the accident - reveals Alberto Puig, Honda team manager - Marc went to Barcelona to undergo surgery and the intervention went spectacularly well. We knew the doctors were good, but they did a fantastic job. "

So fantastic, that an idea started to flash through Marquez's head.

"After the surgery, Marc started to feel very well, he didn't have much pain and he was able to move his arm - continues Puig - As the doctors had told us, the nerve was intact. Honda's thought was not to race in this race and to try in Brno, but after what we had seen, after knowing Marc's desire and after what the doctors told us today, we can understand Marquez's position. He wants to try to get on the bike on Saturday, it will then depend on his feelings if he will race on Sunday or not. Saturday he will see if he will be able to cover the race distance. If he realizes that it would be too risky, Marc understands our position not to race on Sunday. "

So tomorrow the world champion will not be on the track…

“If we were on a new track it would be more difficult, but we were here last week, we know the set-up and Marc knows how to ride, so it wouldn't make much sense to try tomorrow and put the operated arm under stress - explains the Spanish manager - He will try on Saturday and we will see. It is important for Honda and the team to respect the rider's wishes, so we have reached this compromise. "

Crutchlow also received the OK from the doctors…

“It is important that Cal can race too - adds Puig - He and Marc are our fastest and most experienced riders, but they are both injured. But we never pushed to make them race, we respect their will and their opinions, even though their results are important for us. When a rider is in good shape, you can push him, but when he is not, you have to take a step back and see what he can do. "

Bennetts will remain the BSB title sponsor for another two seasons, while Pirelli will continue to supply the tyres until 2025
3 days 18 hours ago

The decision was reached because the races are concurrently scheduled with the World Endurance Championship in which Mike di Meglio races.
4 days 19 hours ago

The young American rider will return to the UK domestic championship with the PTR team. Riding the brand new 765, he will have the opportunity to...
6 days 15 hours ago