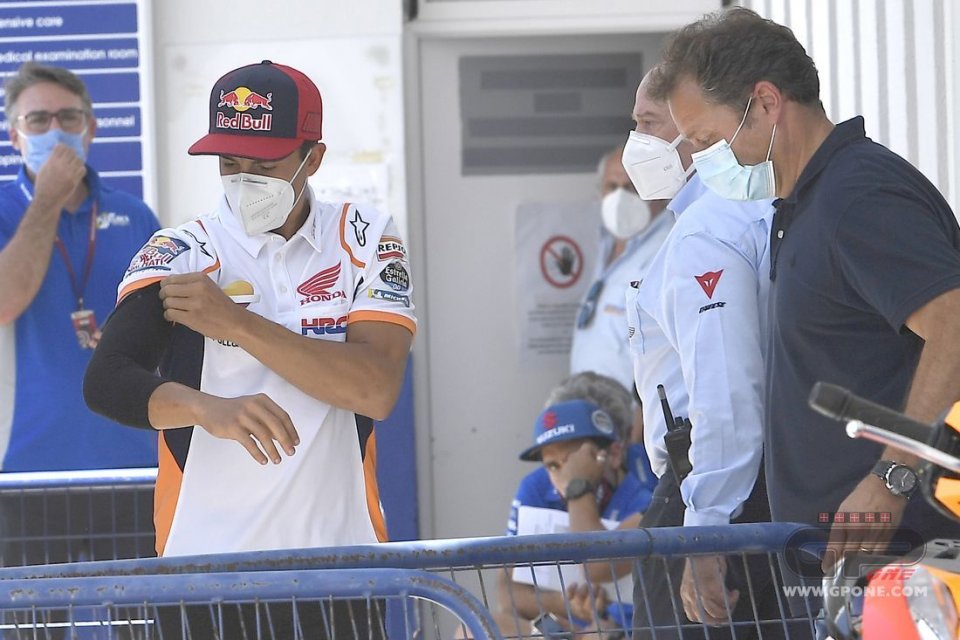 The sporting epic needs heroes and, it is well-known, heroes appear when there are difficulties to be tackled. An impossible feat is what it takes to raise them to Mount Olympus, Hercules had his hydra to face, the riders have the fragility of the body. Marc Marquez has nothing to prove, he has beaten almost every record under the sun (and for those that remain, it will probably be only a matter of time), he has destroyed his opponents on the track, he has filled his home with trophies. If you really want to find a defect, he had never been the protagonist of a lightning comeback. Now he will do it, like others before him, at Jerez.

Will this somehow increase his greatness? We think not. A rider is not measured by his endurance to pain and indeed the desire of every fan should be that no one should have the misfortune (because that's what it is all about) of having to test himself in this particular field.

Journalist Simon Patterson summarized in a sentence what has been going through our mind since yesterday: the question is not whether Marquez can or cannot race, but whether he should or should not race.

Maybe you have to move a little bit closer towards philosophy by moving away from sport to respond, but there are no particular drawbacks in trying.

The starting point is that Marquez has nothing left to prove; even if tomorrow he decided to retire to a hypothetical remote island in the Caribbean where riding a motorcycle is illegal, he would always remain one of the riders who has written the history of motorcycling.

But he wants to race, even with a titanium plate in his arm inserted a few days ago and without knowing what his real conditions are. His thinking is absolutely understandable: he is a rider, he wants to put himself to the test, to discover his limits like those of the bike, to leave no stone unturned. If he did not think in this way, he would spend Sundays papercutting and not going at 300+ km/h.

The desire to race is his but the decision isn’t – it’s the doctors'. They are the ones who must assess that he does not endanger …not only his own safety, but also that of all the other riders. Because races are dangerous and MotoGP races are not done alone, against the stopwatch, but together with opponents. The least you can ask is that (apart from human errors) they know that they are sharing the track with those who have the ability (even physical) not to put anyone's safety at risk.

We fully trust the doctors at the Jerez circuit and all those who work in the world championship, so we take it for granted that the tests done today are absolutely sufficient to ensure that Marquez (as well as Crutchlow and Rins) can ride safely, for themselves and for all the others.

But, to tell the truth, that’s not how it is and not how it can be. So much so that Marc, Cal and Alex have said that only once they are on the motorbike will they be able to see if they can continue or not. Because the difference between a visit to the medical centre and 25 laps on a MotoGP bike in 40 degrees Celsius temperatures is clear even for those who are unable to tell their femur from a rib.

What would have happened, however, if those doctors had stopped the riders from racing? There would have been a popular uprising. In addition to the fact that Marquez's (possible) company has a value from a media point of view that a 'simple' victory no longer has.

Still, the thought that Marquez is simply abandoned to his fate (as far as he is aware) remains. And with him the other riders.

As if it were not enough that these guys put on a helluva show precariously balanced on two wheels and at crazy speeds, that they risk continuously every time they put first gear in, that they push the envelope and move the limit further every day. We want to make them superheroes, forgetting that these actually do not exist. They are the result of the pen and the imagination. Men do not fly, do not lift a tank with one hand and do not repel bullets with their chest. Above all, when they get hurt, it is not enough to turn the page to find them in full form.

Because the epic has its rules, but it is a literary genre and as such does not exist in reality…

The young American rider will return to the UK domestic championship with the PTR team. Riding the brand new 765, he will have the opportunity to...
1 day 16 hours ago

He won two world titles with the Kreidler 50, losing one title to the Spanish star in a points draw
3 days 2 hours ago

Opening dates of the championship and pre-season tests have been changed. Will start on May 29th-31st in Oulton Park. Other ten confirmed.
5 days 3 hours ago

Havier Beltran's team has announced its line-up, with youngster Ryo Mizuno alongside Glenn Irwin with the aim of going for the title
5 days 21 hours ago

Only four public camps are available to the general public in the new year. Those who attend the racer camp must have previous racing experience.
1 week 23 hours ago