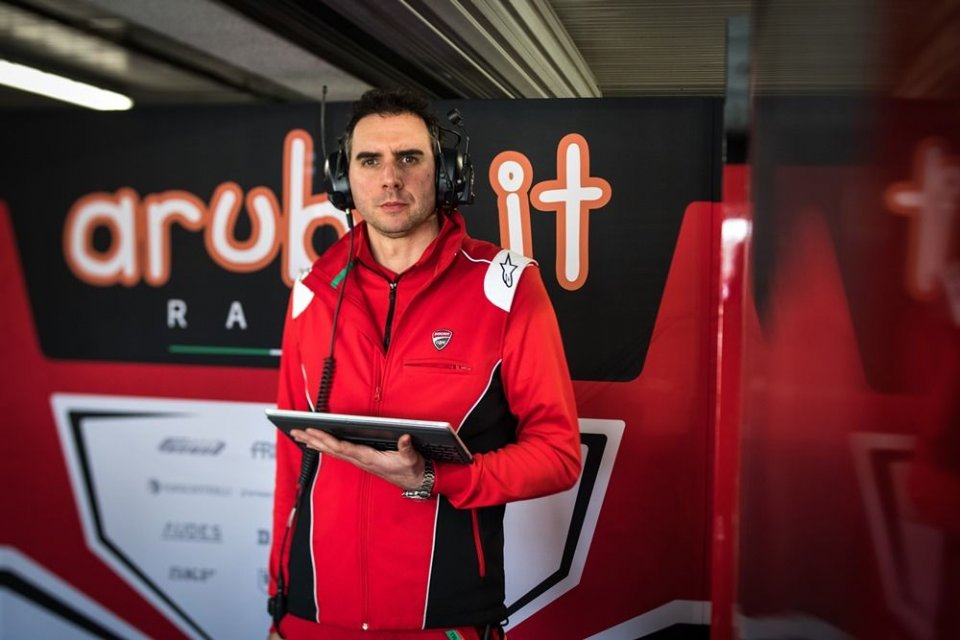 It was the job of Marco Zambenedetti to draw up a balance of the two days of testing in Barcelona. The Ducati engineer, or the Superbike version of Gigi Dall'Igna, if we wish to define him as such, has in fact been analysing what has been done by the manufacturer on the occasion of the last outing before the restart of the Championship.

At Montmelò there was no lack of curiosity towards the red bikes, which for the occasion showed off several new features including a new seat and a straighter tank profile. From the Aruba box therefore emerges a cautious optimism for the work done, but at the same time they have to keep their feet on the ground because the results will only be seen in early August.

“We are quite satisfied with the work done with both riders at Barcelona - said Zambenedetti - with Scott and also with Chaz, we in fact managed to confirm some solutions tested at Misano, both in terms of materials and set-ups. In this regard, after the performance of Misano, I must say that Redding has proved to be competitive even on a track that had less grip. We are not fully satisfied, however, since we are still missing something, but there is confidence in the result we achieved. "

The Barcelona tests took place in July, but Superbike will be racing in Catalonia in two months’ time.

"Exactly. I don’t know what we can expect in September, probably cooler temperatures. Despite the differences that we are going to find, the situation will still be under control and personally we are reasonably enthusiastic about the progress made with the bike ".

In Barcelona Scott confirmed to be in the top positions, while Chaz is further behind. Why? Is there any concern?

“With Chaz we managed to confirm the things we tried, even if we struggled to take advantage of the new tyre. We will have to do something more over the one lap, but nevertheless we go to Jerez aware of our potential. Certainly, the basis is good. "

At the moment it seems that Scott, in comparison with Chaz, has got to grips more with this Ducati. Is that the case or not?

“I would avoid making any hasty judgments, since the times recorded do not respect the real value on the track. Chaz has always preferred to express himself in the race compared to the tests. He does not need to push the bike to the maximum to understand its potential, preferring to work on sensations and details. "

The only race image of Ducati in 2020 dates back to Phillip Island. On that occasion, Scott Redding's Ducati struggled to overtake the others on the straight. Is there a risk of this problem being repeated?

“We hope not to witness such a situation again and personally I don't think we will, because we have worked to find the right solutions. Certainly, the championship is much more balanced than last season and for this very reason I hope that when these values ​​get out of line, I think it is necessary to intervene and change something. "

What has Ducati done to solve the problem that emerged in Australia?

“With Scott we improved the riding position, in order to offer him more comfort, working mainly on the aerodynamics. We take the view that we did a good job and at Jerez we will have confirmation or not. The only thing I can say, compared to Phillip Island, is that in Barcelona the speeds you see depend a lot on braking. "