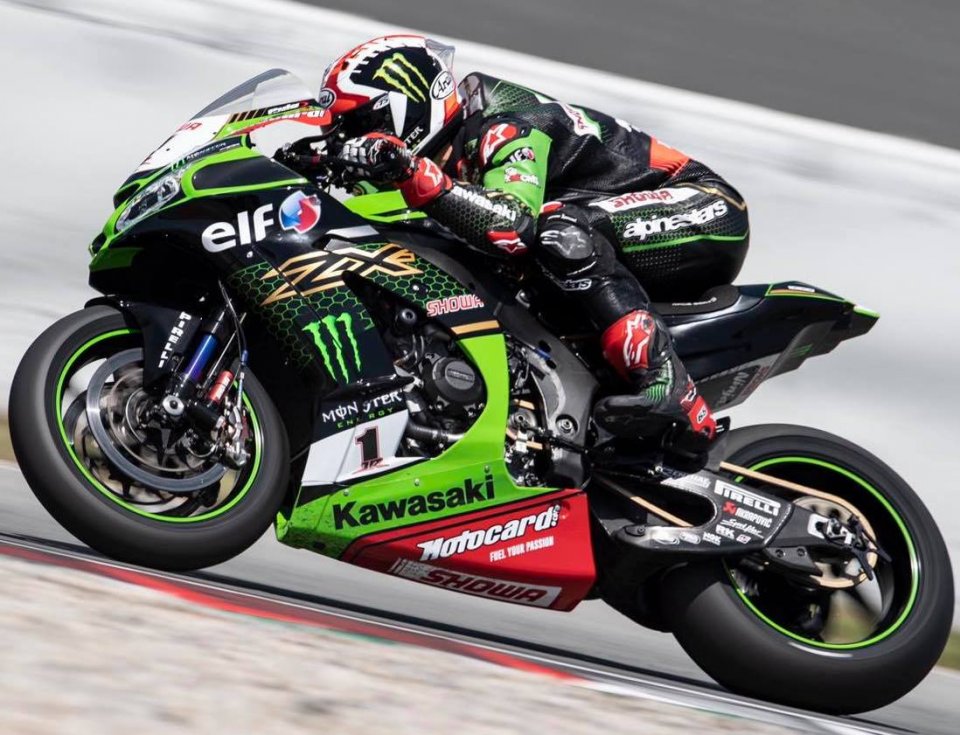 1m40.450s... This is the time with which Johnny Rea ended the two-day test in Barcelona. A superb performance by the Kawasaki man, a time that was than the 1m40.507s set in the MotoGP race last year by Marc Marquez on the Honda. So, the question arises: did Superbike really beat MotoGP at Montmelò? Answer: absolutely not!

There are in fact various aspects to analyse. The first tied to the tyres: MotoGP does not have a qualifying tyre, while Superbike does, so much so that Johnny set the time with the Superpole tyre. Then there are the weather conditions. Thursday morning Rea set his time with the track temperature at not even 30° C, while Marquez had to deal with an almost 50-degree asphalt last year, since the MotoGP race takes place at two in the afternoon. In fact, these two aspects are enough to make it clear that a comparison is not even worthy of mention…

Just to make the situation even clearer, we could use numbers. Just have a look at the record set in 2018 by Jorge Lorenzo in qualifying, that is 1m38.680s, or almost two seconds better than yesterday's performance by Rea. As we have seen, our analysis could be wrapped up here and now, because Superbike would come out of the comparison with the GPs not only second best but also with numerous broken bones.

It might be the case that, as Alvaro Bautista said, in the mixed sections Superbikes are quite close to MotoGP, but when it’s a question of tracks characterized by long straights, such as Austria, Thailand, Qatar or Catalunya, just for an example, GP bikes clearly show their muscles. To understand this better, once again we can rely on the numbers: Rea set a top speed of 316 km/h, about 30 clicks per hour less than the 345 recorded by Alex Rins' Suzuki last year during the race weekend.

This simple aspect brings out the great difference between MotoGP and Superbike, even more in view of the race as analysed by Giorgio Barbier: "On tracks with long straights, MotoGP asserts its strength - said the Pirelli SBK manager - at Barcelona, ​​however, we are satisfied with how our qualifying tyre worked, showing that it can adapt to any type of track and condition on this occasion. For us this was a fundamental test, given it was a first time there. I often hear people talking about our qualifying tyre, but in the end, it is nothing special, it is a race carcass, with a soft compound capable of adapting to any track. The difference is always made by the riders in how they manage to take it to the limit, through their own style and confidence, so much so that once Johnny Rea said to me: "It's awesome."

It must be said, however, that on tracks where riding the bike is required, rather than engine, the gap is narrower. This might be the case of Jerez, where Superbikes have done better than MotoGP in the past over one lap, or Misano, where in the test two weeks ago Scott Redding came within a whisker of Aleix Espargarò's Aprilia, to be exact a tenth and a half: "It must be underlined that despite the heat, the new asphalting of the Misano track offers incredible grip - Barbieri mentioned - also on that occasion the tyre was able to work at high temperatures, allowing the riders to squeeze it to the limit. For us this is an aspect that gives us further confidence and awareness, that we are following the right path "

With the race tyre, on the Riviera, the Ducati rider lapped in 1m33.4s, while with the qualifying one he even got down to a 1m33.067s, or a tenth and a half slower than the RS-GP of Aleix Espargarò, who set 1m32.932s, the only one capable of breaking the 1m33s barrier. Comparing Scott's time with those set in the past by MotoGP, the gap is narrowing.

Even in that case Scott did better than Marquez's race record (1m33.355s), but over one lap a MotoGP bike is still uncatchable. For more information go and have a look at the qualifying record which is still held by Jorge Lorenzo with 1m31.629s, or almost a second and a half faster.

Therefore, when someone says: Superbikes are better or faster than MotoGP bikes, don’t take it at face value, because all that glitters is not gold…

The Indonesian track is one of the reserves on the MotoGP calendar: “It recently flooded, but our drainage system worked.”
4 days 1 hour ago

Enea had made his debut in the Moto3 World Championship with the team from Imola: “I want to remember him as a winner. He helped me a lot.”
4 days 4 hours ago