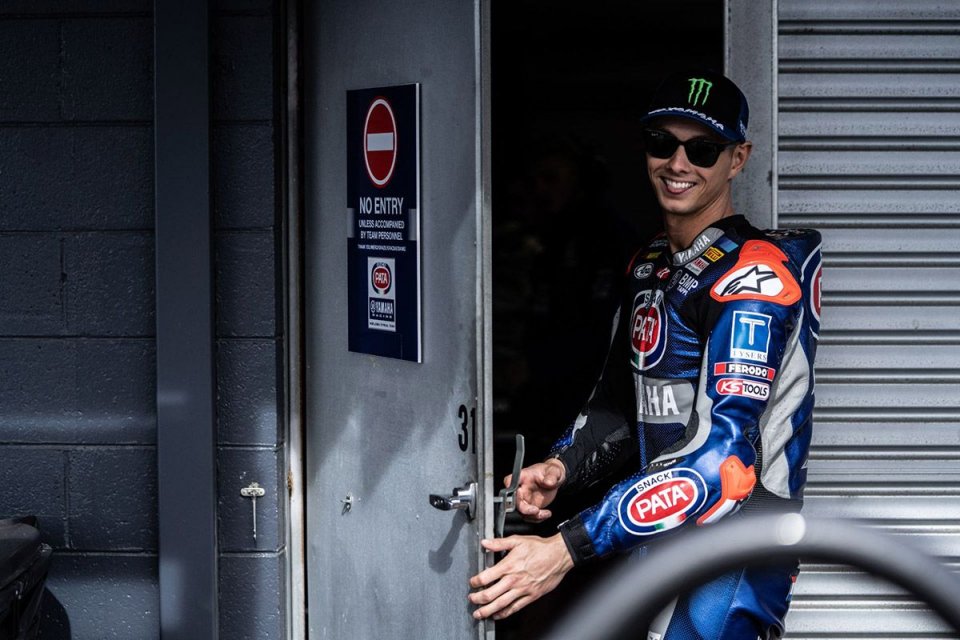 The first day of testing in Barcelona for Michael Van Der Mark also corresponded to the first day on his way out of Yamaha for the Dutchman, who in 2021 will wear BMW's colours in the SBK World Championship. A rather unexpected change of team, it has to be said, because everyone was convinced that Michael would continue to ride for Yamaha in the future, also thanks to the link built with his successes at Suzuka.

Yet that’s his future and the present, specifically today, did not give Michael too much to smile about. Van der Mark stopped the clocks in a time of 1'43.189, almost a second and a half from the leader Redding and about half a second from his now awkward teammate, the Turk Toprak Razgatlioglu.

Here you are racing for Yamaha, but in the last few days you have been in all the headlines for a decision concerning the future, specifically BMW.

How did the first day in the seat go after so many months of inactivity?

"It was nice to finally get back on the bike. Ten years have passed since I last rode here in Barcelona, ​​so it was all new with this bike. This morning I felt great, and I improved a lot during the session even though I think I could have been even a bit faster. I was happy with the sensations on the bike anyway. In the afternoon when the temperatures increased, I had some problems with confidence in the front end and we played a bit with the weight distribution. We suffered in general in the afternoon and only in the end I managed to find the right balance. Only at that moment I had some small technical problems and I could not improve my time. In any case, the really positive thing is was riding the bike back on track. "

Did you have the time to try some new stuff on the R1?

"We tried some new things, only that they didn't work as we would have liked."

One of the challenges of this season will be to race in Spain in the middle of August, when the temperatures are really high. Is that another problem?

"In my opinion it is not important when we race, because we are always happy when we can race. The weather conditions and the heat will be an extra challenge, but as riders we are in good shape. Maybe it will be difficult to find a set-up that works well on the bike in all conditions. I think Dorna did a fantastic job of getting a calendar back up. Of course, there are a few more races in Spain, but if you can race everyone is happy. The riders, the team, sponsors. Racing is all we want."

"To be honest from the first moment I worked with Andrew, I immediately felt I could work well as I hadn't been able to do before. It's not a big disadvantage, there are certainly things to learn from each other. I feel that he really understands me, and I like working with him. It would have been nice to stay together, but I don't feel a big disadvantage. "

Razgatlioglu: "Too many things to try, too much confusion; I just have to ride the bikes"

On this first day of testing in Barcelona, ​​Toprak Razgatlioglu was the one who missed out on the top slots in Yamaha. The Turkish rider was unable to keep the pace of the fastest riders.

"Today we had so many things to try, that at some point I went into confusion - explained Toprak - this work had to be done tomorrow, instead we decided to bring it forward. As I said, all the new things created some confusion, since my head was destroyed. With Yamaha I struggled especially in the corners, since I didn't have the sensations I wanted. I then spoke to my crew chief, telling him that for tomorrow the only thing that interests me is to ride the Yamaha with the same set-up as the morning. In fact, I had positive feelings this morning and I am convinced I can do better. For the rest, I must try to trust the track, since it is the first time that I have ridden here in Barcelona. "

He also had a comment to make about Van der Mark's farewell at the end of the season.

"I'm sorry he is leaving Yamaha; I've always had a good relationship with him and I've known him for a long time. I think he's happy and convinced of this decision, I can't help but wish him the best for his future, since he's a good guy".